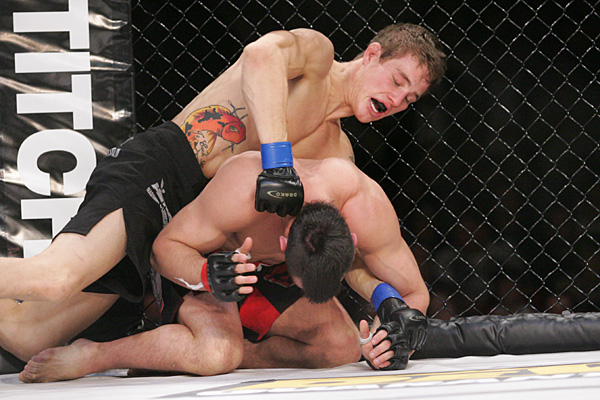 Legacy Fighting Championship may not produce quite as many UFC hopefuls as the Resurrection Fighting Alliance, but the Texas-based promotion has become a stable home to some UFC castoffs, including Legacy FC 42 headliner Anthony Njokuani, while also providing a national platform for its up-and-comers. The company’s biggest prospect at Legacy FC 42 is middleweight Ryan Spann. Spann, who has won seven of his eight pro fights, is set to meet Legacy mainstay Larry Crowe in the evening’s co-headliner.

After a 4-1 mark as an amateur, Spann turned pro in 2013 and posted four straight first-round submission victories. After winning his fifth fight via a five-round decision to capture the Best of the Best 1 middleweight crown, Spann dropped his sixth pro fight — for the Best of the Best 3 middleweight championship — when he suffered a 21-second TKO loss to Brandon Farran, who remains one of the most experienced foes on Spann’s resume. “Superman” rebounded from the loss by defeating Artenas Young, another veteran competitor, via third-round submission and adding another victory via first-round submission in his next outing. The 23-year-old trains out of American Top Team Beaumont.

Crowe debuted in 2010 and won three of his first four. With just a few fights under his belt, he made his move to the Legacy cage in 2011 for a light heavyweight fight. Crowe has remained faithful to the promotion ever since, accumulating a 6-3 mark under the Legacy banner. “Tae Kwon” Crowe had his longest Legacy winning streak snapped earlier this year when he fell short in a middleweight title bid against Leonardo Leite. It was the second time the 31-year-old came up short in a campaign for a vacant Legacy middleweight championship. Crowe, who trains at the Silverback Fight Club, has suffered setbacks against the most significant foes he has encountered, leaving a submission win over Bellator and EliteXC veteran Jon Kirk and a 66-second TKO victory over prospect Quentin Henry as the most notable victories on his record.

Spann, who stands 6-foot-5, will tower over the 5-foot-11 Crowe. The younger fighter could use that length to his advantage in the stand-up, but Crowe is the more effective finisher with his striking and could still land plenty against his taller opponent. Spann also has to be careful when he changes levels and comes in for takedowns. His loss to Farran came on a series of elbows Farran delivered while Spann was clinging to a single-leg attempt. Spann has a far bigger edge in the grappling department, where he has picked up six pro and three amateur victories. However, his athleticism and explosiveness on the feet could give him an all-around edge against Crowe, who doesn’t always display the most technical striking attack or keep his hands up to protect his chin.

Crowe is good enough to play perennial Legacy contender, but he isn’t good enough to get over the hump and capture the championship. First, he lost to Leite for the belt. Now, he’ll provide Spann with a stepping stone on the young fighter’s journey to a title bid of his own. Spann likes to pursue submissions, so we’re most likely to see him tag Crowe on the feet, create a scramble and snag a choke once the fight hits the mat.

Canada’s Hard Knocks Fighting Championship is serving up a trio of UFC veterans — Nick Ring, Kalib Starnes and Rodney Wallace — in its 44th effort, but the most intriguing fighters on the card are a pair of welterweights who have yet to grace the big stage. Brandt Dewsbery, who has picked up 13 wins in a 17-fight career, will seek to hand Miles Anstead the first blemish on what has thus far been a perfect record.

The 24-year-old Dewsbery has been fighting professionally since 2009, when he debuted under the Rumble in the Cage banner. The young Canadian fighter won his first five fights before fighting to a draw against Mike Scarcello and suffering his first pro loss to Joel Powell. Another five wins, including a victory over recent RFA titleholder Benjamin Smith, followed, but then Dewsbery dropped consecutive fights. He has righted the ship again with three straight wins. The Canadian Martial Arts Centre product has six wins each by submission and some form of knockout. His submission defense might be the biggest hole in his game. He has succumbed to two rear-naked chokes and a 57-second heel hook submission.

Anstead has a background in Brazilian Jiu-Jitsu. He stumbled out of the gates, losing his first fight as an amateur. He made some adjustments in his training after the loss and has been perfect ever since, with three amateur victories and six pro wins. Anstead finished his final two amateur opponents in under a minute, and he’s scored two first-round submission finishes as a pro. The 27-year-old fights out of the Hayabusa Training Centre and competed primarily as a middleweight before moving down to 170 pounds for this fight against Dewsbery.

Dewsbery is a tall, lanky fighter with a very upright striking style and an aggressive grappling game, but he’s fighting a seasoned grappler with smooth transitions, an equally strong submission game and a vicious ground-and-pound attack.

Dewsbery should keep this fight competitive, but he makes too many mistakes on the mat. If he can’t turn this into a striking battle, he could be in trouble. Anstead is giving up approximately three inches in height, but he’s likely to be the stronger and more powerful fighter. He’ll look to rock Dewsbery and pounce on the opportunity to take the fight to the canvas. Dewsbery will throw up some submission attempts, but Anstead should be able to fend off those attempts and lock in a submission of his own for the victory.

China-based Rebel Fighting Championship may not have the same global recognition as its Asian counterpart, ONE Championship, but the promotion is drawing its fair share of talent. The company’s third offering, dubbed “The Promised Ones,” continues the trend. It includes a featherweight grand prix semifinal bout between former WEC champion Miguel Torres and fellow UFC veteran Will Chope, and it was supposed to serve as the setting for Paulo Thiago’s first bout since he was cut from the UFC roster. While these veterans take center stage, a lesser-known prospect seeks to make a name for himself in the featherweight grand prix. Kleber Koike Erbst has won 12 straight fights, and he’d like nothing more than to extend his streak and advance to the tourney finals on Saturday. Japanese veteran Takahiro Ashida stands in his way.

Erbst debuted in 2008 and got off to an underwhelming 4-3-1 start, though one of his losses came via disqualification. In late 2010, things finally clicked for the 25-year-old Japanese fighter. He won his next 12 fights, including a submission victory over veteran Hideki Kadowaki. In his 12-fight streak, Erbst has tallied eight first-round finishes. The decorated grappler trains out of Bonsai Jiu-Jitsu and has a total of 13 submission wins in his career. He has competed primarily in Japan, but he trekked to Poland recently to turn in an impressive performance against Anzor Azhiev in the KSW cage.

Ashida steps in to replace Michael Tobin. The 25-year-old Brave Gym product has been fighting professionally since 2010. He also got off to a rough start, posting a 2-1-2 mark through his first five fights. Then he went on a run, winning 11 of his next 12. Ashida has run into some trouble lately, however. It started with a split decision loss to Miguel Torres at Rebel FC 2. Ashida suffered unanimous decision losses in his next two outings to move his current skid to three straight losses.

Erbst is an elite ground specialist. He can be tentative and awkward at times with his striking, but his winging punches can be effective — just ask Azhiev, who was on the receiving end of plenty of jaw-rattling blows before falling victim to Erbst’s submission game. If Erbst can continue to develop his striking arsenal to complement his jiu-jitsu, he’s going to be an even more dangerous foe.

Ashida’s lack of recent success isn’t very inspiring. He was submitted twice earlier in his career, but he’s been hard to stop lately. That should change against Erbst, who is head and shoulders above Wataru Sasaki and Katsunori Tsuda in his mastery of the ground game. Erbst might pursue Ashida on the feet, but it will ultimately boil down to what he can catch Ashida in while the two grapple on the mat. Erbst is just as effective off his back and isn’t afraid to pull guard, so a triangle or an armbar from the bottom are real possibilities. If Ashida can somehow survive to the final bell, he’s still likely to lose via points.