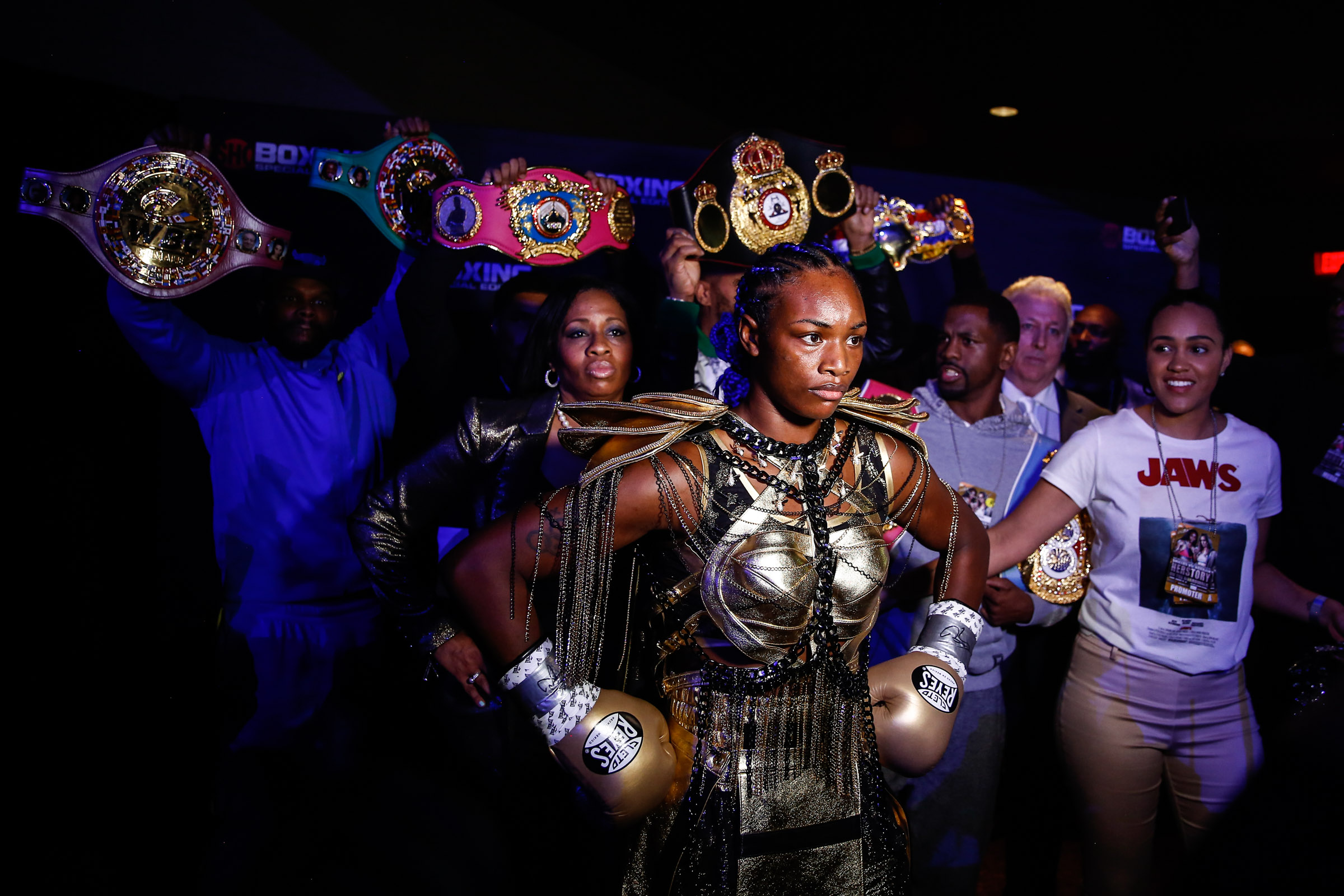 After taking off a month to prepare, the Professional Fighters League returns with the most intriguing fight card in promotional history. The fourth event of the 2021 PFL season goes down on Thursday at 6 p.m. ET and airs on ESPN+ and ESPN2.

The event features the debut of the greatest women’s boxer of all time, the beginning of the revenge tour for Anthony Pettis, and nine other thrilling match-ups.

The main event serves as the long-awaited MMA debut of boxing superstar Claressa Shields. Although most fans expected Shields to need more time to transition, she will have the opportunity to make history on Thursday night. The 26-year-old looks to successfully transition to MMA against Brittney Elkin. Shields wants to use her opponent as a stepping stone, but she needs to make sure not to underestimate Elkin. Anything is possible in MMA, and the lesson seems to not be learned until it’s too late.

In the co-headliner, former UFC champion Anthony Pettis seeks to get back on track against the undefeated Alex Martinez. These fighters had completely different PFL debuts, but they now find themselves with the need for more season points.

The fight card also features the PFL debut of UFC veteran Olivier Aubin-Mercier, who has been paired with Marcin Held. Clay Collard attempts to put on another show when he meets Joilton Lutterbach. Former PFL champions Lance Palmer and Natan Schulte will also be in action in separate bouts.

Anthony Pettis was upset in his PFL debut opposite Clay Collard. Will he rebound here against Alex Martinez?

Pettis had high hopes against Collard, but he was quickly reminded of how crazy the sport of MMA can be. Pettis came out looking as explosive and dangerous as expected, but Collard was the better man that night and pulled off the upset in dominating fashion. Pettis now finds himself facing adversity with no wiggle room for another loss. Unfortunately, he will be thrown right back into tough competition against the undefeated Martinez.

In his first fight of the season, Martinez came out with a split-decision win that could have gone either way. Although he got the victory, Martinez did not fully show his potential. The 27-year-old was originally supposed to fight on Dana White’s Contender Series before losing the opportunity due to visa issues. Instead, he suddenly found himself with the opportunity to sign with the PFL and join the stacked lightweight division. Martinez’s potential is through the roof, but only time will tell if he can rise to the occasion and spoil Pettis’s season.

The former UFC champion Pettis has to be pissed off after losing his promotional debut. He had plans to come into the PFL and dominate, but the aforementioned Collard pulled off the shocking upset. Pettis has faced adversity before, and he’ll try to bounce back with a statement win. Luckily for Pettis, he will have the opportunity to do so against an opponent that also prefers to strike.

Pettis has little room for error if he wants to make the playoffs.

Meanwhile, Collard’s reward for his victory over Pettis appears to be a spot on the prelims against Joilton Lutterbach. Does Collard deserve better? Will he respond with another big win here?

Collard deserves quadruple the respect he gets from combat-sports fans, but this particular match-up makes sense. Collard comes into this fight after pulling off one of the biggest upsets in PFL history. Not only did he get the win, but Collard put on a masterpiece that led to the unanimous decision in his favor.

Collard needs to have a quick memory, because one win alone is not going to get him into the playoffs. Although the victory against Pettis was unbelievably impressive, the work has only begun for Collard to become the lightweight champion. He will now be tested once again with a match-up against one of the youngest fighters to have over 40 pro fights.

Lutterbach looks to turn his season around after losing his promotional debut by split decision. The 28-year-old comes into this fight with a 34-9 record spread out over many promotions. Not often do you find a young fighter with so much experience. Lutterbach was seen as one of the dark horses to win the division before losing his first fight. He now has the opportunity to get right back on track by spoiling the highly anticipated return of Collard. Lutterbach is an extremely deserving opponent for Collard and should not be underestimated in the slightest.

Collard exceeded expectations and solidified himself as one of the favorites to win the whole season. Some people might think this fight should be easier than the Pettis match-up, but Lutterbach is the farthest thing from an easy opponent. Collard needs to stay humble and take this season one fight at a time.

Collard has more experience and big wins than most fighters in the entire promotion. His ability to incorporate his boxing skills into his MMA arsenal has made him a nightmare match-up. Lutterbach offers him an interesting stylistic pairing, but nobody can stop the Collard we saw against Pettis. With a win here, Collard will officially separate himself as the frontrunner to claim the season championship.

Claressa Shields is set for her pro MMA debut against Brittney Elkin, a 3-6 fighter. How will she fare?

This is one of the biggest storylines in all of MMA. With the recent advancement of combat-sport crossovers, we never know what to expect in these types of fights. Shields has arguably the best striking game out of the entire promotion, but she lacks the grappling experience needed to be a world champion. Luckily for Shields, she has the opportunity to display her MMA skills against an opponent that is always looking to bring the fight.

When Shields first announced she was going to compete in MMA, most people had no idea what to think. Many MMA fighters in the past have transitioned to boxing, but rarely do boxers transition to MMA. With that being said, this is expected from one of the most dominant and fearless boxers of all time. Shields made the right decision by joining fellow former boxer Holly Holm at Jackson-Wink MMA. Not only will she receive some of the best training in the world, but she will benefit from a team that has gone through this before.

Shields also opted to join a promotion that would not throw her directly to the wolves. She also has an opponent who offers her a tough match-up without potentially rushing her development. Everything is lining up for a showcase to be put on by Shields.

Elkin comes into this fight on a three-fight skid after starting her pro career with a 3-3 mark. She has spent the last two and a half years competing heavily in jiu-jitsu. Although her MMA skills have failed to impress at times, Elkin has a grappling advantage over Shields that must be addressed. Some things you simply cannot learn in a short amount of time, and MMA grappling is at the top of the list. Shields has surely prepared for this and finds confidence in her hands, but being taken down is surely a concern. The game plan for Elkin seems obvious: get this fight to the ground as soon as possible.

All things considered, Shields should be able to get the job done against Elkin. Her quick and powerful hands will always give her the ability to knock out her opponent cold. The lack of experience in grappling is an issue, but surely her coaches have prepared her adequately for this fight.

Although this fight card is filled with potential bangers, one fight, in particular, is going completely under the radar. That would be the main-card opener between Brendan Loughnane and Tyler Diamond. This is guaranteed to be one of the best fights of the night. It features two fighters who are hitting their prime as they search for their second win of the season. They are extremely talented, but the stylistic match-up makes this fight all the more interesting.

Loughnane comes into the bout while riding a massive wave of momentum that started in 2019. He fought on the Contender Series and managed to pull off a unanimous-decision win against current UFC fighter Bill Algeo. Unfortunately, UFC President Dana White was not impressed and decided to pass on signing Loughnane.

Loughnane went back to training and joined the PFL at the end of 2019. He has since put his skills on display by winning all three of his fights by decision. Although he dominated in those three outings, the lack of finishes kept him from getting more attention. Loughnane must have taken this to heart, because he started off the 2021 season with a statement. It only took him two minutes to finish Sheymon Moraes via a barrage of punches and jump to the top of the season standings. He’s now on a six-fight winning streak as he looks to beat one of his toughest opponents yet.

Diamond has continued to go underrated since competing on The Ultimate Fighter 27. Not only did he make it to the season finale, but Diamond barely lost by split decision to Bryce Mitchell. Despite losing the opportunity to sign with the UFC, Diamond stayed focused and won two more fights on the regional scene. He then signed to the PFL with the hopes of winning the $1 million prize this season.

Diamond got off to a great start by winning a tough fight against Sung Bin Jo. Although he did not get the finish, Diamond displayed his impressive well-rounded skill set on his way to the unanimous nod. Diamond is on a three-fight winning streak with the hopes of taking the next step toward the 2021 featherweight championship.

Both of these fighters are hitting the prime of their MMA career and come into this fight hungrier than ever. You will not see many people talking about this fight due to the star power on the remainder of the card, but Diamond and Loughnane have the potential to steal the show. This is simply a fight you do not want to miss.