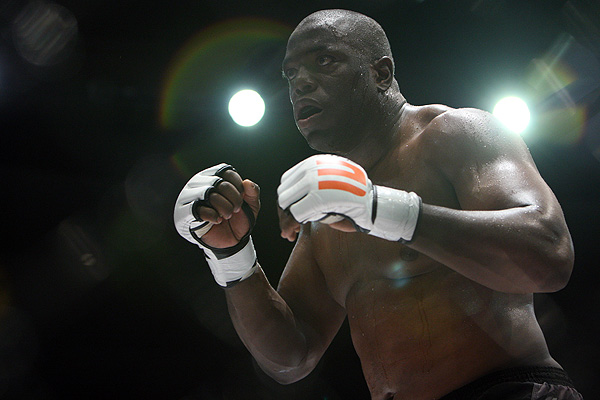 The issue of professional athletes protesting at sporting events has been at the forefront nationwide for more than a year now. No less than the President of the United States has made his feelings known about pro athletes taking a stand for issues they believe in as it relates to equality and social justice.

Legacy Fighting Alliance heavyweight champion Richard Odoms has the ability to view the issue from both sides. Not only is he a pro athlete, but he is also a police officer in his home state of Texas. Odoms unequivocally supports an athlete’s right to protest, but he hasn’t personally experienced the issues that are at the root of their demonstrations.

“The police department I work for and the area we work in is very diverse,” Odoms told Combat Press. “We have people from all over and from all walks of life. We don’t deal with racism here — there are all kinds of different cultures here, and we’re a close-knit community and we respect people’s boundaries. We all have problems that we go through, but it would be odd to have a racist officer in our ranks, because it’s so diverse and we make so many changes.”

Odoms also serves as an instructor on his police force and educates young cadets on displaying empathy for others. He teaches these cadets how to be of use to their community and keep people safe. Becoming a police officer was a childhood dream for Odoms, and it tied into his pursuit of a career in mixed martial arts.

“I enjoyed competing in martial arts growing up, and after I received my black belt in taekwondo, I started training at the police academy,” said Odoms. “After I finished, I wanted to stay in shape and keep myself safe if I was going to be a police officer. I started competing in Toughman contests locally and nationally, and I also did some pro boxing before I had an eye injury.”

It was then that Odoms decided to make the switch from boxing and Toughman contests to MMA.

“I didn’t like [the sport of MMA] at first, when there was eye-gouging and groin shots,” Odoms said. “But when the UFC started emerging with The Ultimate Fighter and it became more of a sport, I became more interested and I opened my gym. It just took off from there, with me combining other arts like Brazilian Jiu-Jitsu and Muay Thai, and then I closed my gym to train MMA full-time.”

The inherent danger of working in law enforcement and the desire to help others and protect the community makes juggling careers in MMA and police work easier for Odoms.

“I think they complement each other,” Odoms said. “The better I am at martial arts, the safer it is for me out on the street. I hate to see children get hurt — that’s the hardest part of the job. You deal with things at their worst and with people having problems, but you have to find empathy in these situations and more understanding. But the best part is helping people and being a service to the community, and I feel like a blessing to the situation.”

Odoms turned pro in his MMA career in 2010. He has fought for organizations including Bellator MMA and the World Series of Fighting Global and Legacy Fighting Championship. Odoms also nearly had an opportunity to fight Ruslan Magomedov at UFC 177 in 2014, before an eye injury caused Odoms’ removal from the card.

“It was a last-minute fight,” Odoms explained. “I had three weeks’ notice and was going to procure my license. It was a huge opportunity, and I was totally game for it. But I had a detached retina, so I saw my optometrist and he said I had tearing in my other eye, which could have caused another detached retina. I don’t wish that surgery on my worst enemy. I had the surgery 10 days from the fight, and I would have had seven days to heal. But the UFC thought I was trying to hide from the fight or hide an injury, so they told me to go see their doctor.

“He took look at my eye and said everything was fine, and I had two more days to heal by then and I was going to take care of everything for the fight. But the doctor told the UFC he couldn’t clear me for two more days, so they pulled me from the fight. It was a big disappointment, but I wanted to continue to do what I do.”

Odoms resumed his career after his brief flirtation with the UFC. He has compiled a 13-3 record overall. He joined the Legacy Fighting Alliance in March and wasted no time winning its vacant heavyweight title by submitting Jared Vanderaa in June. His first title defense comes at LFA 26 on Friday, Nov. 3, in Odoms’ native Texas. He’ll face Jeff Hughes, whose record stands at 7-1.

“It’s going to be a barnburner,” Odoms said. “Jeff is a more agile fighter, and I expect to see different looks. But I will show why I have the belt. People are counting me out, but I will change minds. I feel a finish coming, and I’m very well-prepared.”