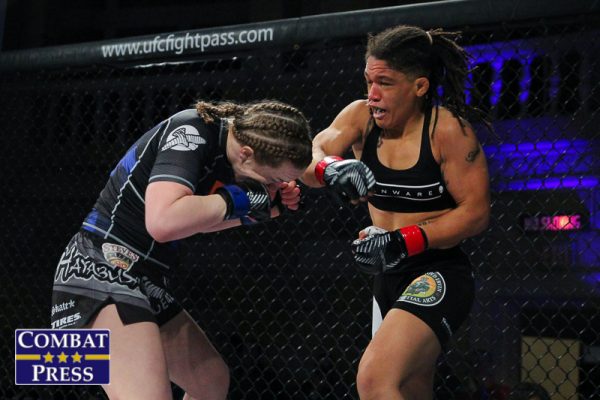 This week, we have just one bout on the UFC 253 card to discuss. That fight pits Ketlen Vieira against Sijara Eubanks. I want to talk about more than just one fight, though, so I will also get into the Oktagon 16 bout featuring Invicta FC veterans Minna Grusander and Magdaléna Šormová. In future installments, when this arrisses, what I may do is a Twitter poll, listing some fights and let you pick which one you want me to discuss. Now, let’s get into the fights.

Vieira comes in after facing defeat for the first time in a December loss to Irene Aldana. In that bout, she started out strong before Aldana dropped her with a punch and got the finish. Previously, though, she had scored some big wins over Cat Zingano and Sara McMann, actually submitting McMann.

Despite having only two finishes on her resume, Vieira can be aggressive. In this fight, it will be important for her to find a balance between aggression and caution, but I am sure she and her team have seen Eubanks’s recent win and realize this.

Eubanks probably does not have any intention of standing and banging with Vieira. Can she? Absolutely. While she was being hit by Julia Avila, don’t look past the fact that Eubanks landed some of her own. However, Eubanks probably will feel her best bet to win is with takedowns.

Vieira will have four inches in height and an inch in reach on Eubanks. There are pros and cons to this. She can use the advantage to try to be active from a safe distance, where she doesn’t have to get close enough for Eubanks to tie her up. However, if the clinches do take place, then head position will be important, and, as the taller fighter, it’s going to be a bigger challenge to get her head under Eubanks’ head. That’s a problem against someone like Eubanks. Make no mistake, Vieira is more than capable on the ground, but Eubanks is so good on top and has great top pressure. If Eubanks is the one getting the takedowns, then Vieira will have trouble getting out of there.

Vieira will have the striking advantage, so it stands to reason that she will want to keep it on the feet, while perhaps mixing in a takedown of her own if it looks opportune or maybe late to steal or cement rounds.

Another interesting aspect will be each fighter’s emotional state and confidence level. Vieira did suffer her first defeat her last time out. How will she rebound? We have seen it go different ways with different fighters. There is a saying that you “learn more from a loss than a win.” That’s partially true, but, still, no one likes to lose. Did Vieira learn anything from the loss? Will it make her a more determined fighter, or will it make her gun shy? Her loss was on a punch, and there are times when that messes with someone’s head and causes them to become more hesitant. She can’t afford that here. On the flip side, if it does make her more determined or she did view it as a learning experience, then it’s also possible we see the best Vieira yet.

Eubanks is coming off a huge win just a couple weeks ago over the aforementioned Avila in a fight where she was a big underdog. Eubanks has never been short on confidence, and to have that win, after a win over Sarah Moras in her previous fight, will put her confidence at an all-time high, I am sure. If she channels this right, then she can be even more dangerous. If she goes in with the mindset that she can get the takedown any time she wants it or that she is a better all-around fighter, then she has a tremendous chance to win. Conversely, if it makes her overly confident, then she runs the risk of having that overconfidence lead to a mistake. Maybe she feels she has nothing to be afraid of on the feet or feels Vieira can’t stop her clinches and takedowns. When you are overconfident, you are more prone to mistakes.

Regardless of any of the above, this should be a very exciting fight that I suspect will go all three rounds.

First off, I credit these ladies for taking this fight. Both women are coming off a loss — two in Grusander’s case — and they have a lot at risk here.

Grusander lost her last two, both to Jinh Yu Frey in Invicta title bouts, but an argument could be made that she won them, especially the first one. Those fights took place in late 2018 at atomweight. That is the other part of the equation here: this fight is at strawweight.

Surely, Grusander feels comfortable at strawweight, because this isn’t a case of suddenly taking a fight at a higher weight. She has been vocal that she would be moving up for some time. However, it is risky to make the first fight at a higher weight against someone so skilled who is a natural at that weight. Grusander is comfortable wherever the fight goes, but the majority of her wins are on the ground, whether by submission or TKO. If the plan is to go to the ground, then is she going to be strong enough to get Šormová down? Furthermore, Šormová has a three-inch reach advantage, so can Grusander even get in close enough? Then, when she gets it down, is she going to be able to keep it down or stay on top? Šormová is strong, and she can possibly control those clinches or just muscle her way off the bottom.

Grusander’s best route would be to set up the takedowns, don’t try to clinch to get them, throw kicks or punches to get inside, and then shoot and try to get them in the center of the cage.

Šormová is coming off a loss by armbar, so she can be submitted. That loss came about a year ago to Svetlana Gotsyk in a rematch of a fight where it was Šormová who had won with the armbar. She has a very nice resume of wins that includes Gotsyk, Eva Dourthe, Cristina Stanciu, and a decision over current UFC fighter Kay Hansen in Šormová’s lone Invicta FC fight.

As much as I said Grusander might want it on the ground, Šormová is more than capable there. She has a few submission wins of her own. Here, though, she might want to use her reach advantage. Jabs and kicks might be her best route to victory. If she can do that and keep landing, then she might even frustrate Grusander and make her susceptible to more damaging shots. She might want the takedowns herself, and the best route to them is to force the clinches, put Grusander’s back on the cage, and use her strength. Šormová can get those takedowns, and she should make sure to land in a dominant position. She will be much harder to get off than Grusander when they are each on top.

One of the appealing things with this bout is that there really are a variety of ways it can play out and a variety of things each woman can do to have success. It is also a fight that can end in round one or can go three hard rounds. This contest is not getting the attention it deserves. It can have some significance in not just each lady’s career, but even in where things go with Invicta once international fighters are able to fly in for fights.