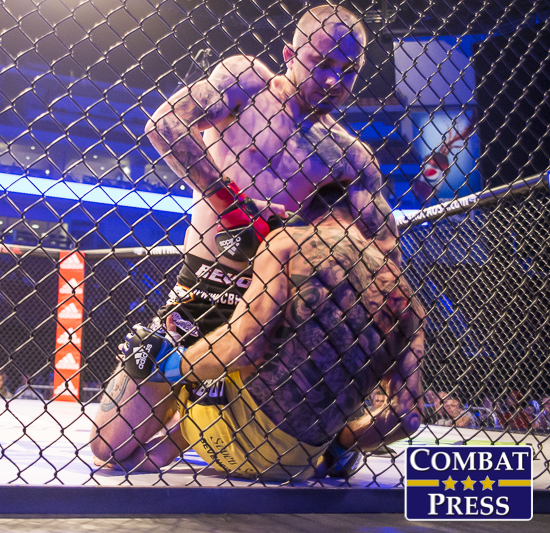 In 2002, popular British band Chumbawamba came out with their most popular song, “Tubthumping.” It was a catchy tune that eventually hit the U.S. Billboard Hot 100 at number six. The main refrain in the song goes, “I get knocked down, but I get up again. You are never gonna keep me down.” The song still pops up in video games, movies and popular culture worldwide.

If there’s one thing UFC featherweight Darrick Minner has shown time and time again, it’s his ability to roll with the punches. He’s 24-11 as a pro, and the Nebraska native has been to the scorecards fewer times than the number of fingers on his newborn daughter’s right hand. In fact, he sits about 50/50 on decisions going his way or not. Ten of his losses were by way of a finish, and in almost all of his wins, he was able to submit his opponent. In his entire career, Minner has never lost two in a row. In a way, “Tubthumping” could serve as Minner’s theme song.

In late February, before the coronavirus (COVID-19) pandemic set in, Minner received a short-notice call for his long-awaited UFC debut. He was set to face fellow Nebraskan Grant Dawson at UFC on ESPN+ 27. While he didn’t have a ton of time to prepare for the specific opponent, he’s always training and has a willingness to take on anyone at any time. However, it just wasn’t his night. Minner ended up getting tapped out early in round two, but he was locked into a UFC contract.

Within 10 days of Minner’s Octagon debut, the world started to crumble. The spread of the virus led to the temporary shuttering of many sports, and the UFC was not immune. His camp, Premier Combat Center in Omaha, was shut down for a bit, but that didn’t stop Minner from staying in form.

“I was just one of those guys who didn’t know what the hell was going to happen,” Minner said. “I just tried to live as normal of a life as I could. I still trained every day, and I still did everything like I normally would. I didn’t really quarantine myself. I think I did for like a week. It didn’t make my girlfriend happy, but I still worked out. I had one of my training partners, and he rented a storage unit. For a week and a half, we trained at the storage unit. We had some mats down, and we just trained out there.”

This has been the story for a lot of fighters while gyms have been closed. People are meeting in parks, garages and basements to get their work in. It’s a lot like the early days of MMA. Minner trains and teaches full-time, and it just wasn’t in his DNA to slow down. He and his girlfriend Jordyn also had a baby girl due in late April, so he had an extra bit of motivation. Then, on April 21, Brogyn was born.

“It was pretty crazy,” Minner explained. “I couldn’t go to any of [Jordyn’s] appointments. Then, she was supposed to get induced at 9 a.m on April 21, but she goes into labor and started having contractions at like 3 a.m., and we got to the hospital at 4 a.m. Then, she had [Brogyn] at like 5:30 a.m. We were there for not very long. They stuck the masks on you, and everything was pretty normal. It was cool, because we didn’t have a bunch of people in and out every day, honestly. We were only there for 36 hours. They got us in, got us out.”

Through all of the shutdown madness and the birth of his daughter, Minner kept his nose to the grindstone. Nobody ever really knows when the UFC is going to come calling. The promotion’s last event at that point had taken place on March 14 in Brazil, and five events were canceled through the end of April. In late April, the promotion announced a three-event run over the course of eight days in May. By the end of May, the UFC was able to put on four exciting events and become one of the first sports to get back to live action, even if behind closed doors.

This was when Minner finally got the call. He had just two weeks to prepare.

“I found out about the opponent on Wednesday of last week,” Minner said. “The Friday before, we got offered a guy named Peter Barrett, and we took it, but he didn’t take it. He turned it down. So, [UFC matchmaker Sean] Shelby started looking for a fight, and they offered me five guys, and I told them I’d take any of those guys. You know how I do. He came back and said Jordan Griffin took it, and I was like, cool, I’ll go get that win back.”

Minner first faced Griffin at Legacy Fighting Alliance 34 in March 2018. Late in the second round, Minner got caught in an armbar that ended the fight. There’s more to the story, though.

“I don’t think he’s gotten too much better. I still think he’s the same fighter as showed up in his T.J. Brown fight and his Chas Skelly fight and his Dan Ige fight. He put up more of a fight with Dan Ige, but I think that’s just because Dan was off that night. The Contender Series fight, he got a big bum out of Alaska that had a good record. Everything he did with the T.J. Brown fight was similar to what happened in our fight. Besides, I controlled him a lot more on the ground, and my grappling is a lot better than T.J. Brown’s. I think he’s tough. He can take an ass-whooping and stay in fights.”

Minner arrived in Las Vegas on Tuesday morning to start getting prepared. He and his team had to stay quarantined while awaiting the results of the COVID-19 tests they took upon arrival. The UFC has a pretty sweet setup for the fighters, though, since they can’t train at the Performance Institute right now.

“They leased the whole hotel,” said Minner. “We have our room and then, right next door, I have my own workout room with our own portable sauna, like the ones with the neck hanging out. It’s so crazy, man. It’s different.”

Minner is no stranger to adversity. No matter what life throws his way, he just keeps getting up, dusting himself off, and going back for more. On Saturday night, at UFC on ESPN 10 at the UFC Apex, he has the rare chance to avenge a surprise defeat. One thing’s for sure, he’s never lost two in a row, and every time he gets knocked down, he gets up again.