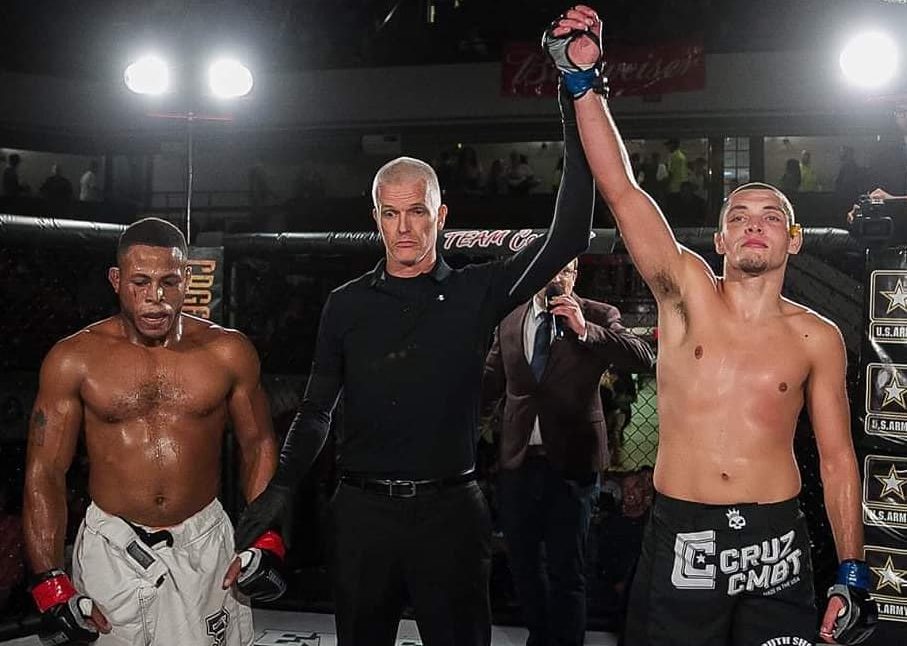 LFA 89’s Joe Giannetti: ‘Not Getting Paid by the Hour’

It’s always good for someone to know what career they are destined for at a young age. Many people waste valuable years just screwing around at some generic school or dead-end job while they wait for something to click. Massachusetts native Joe Giannetti, on the other hand, knew what he was going to do before he even graduated from high school.

“Fighting is what I’m best at, and it’s the best way to make money for me,” Giannetti told Combat Press.

During his junior year, he even told his teachers about his career goal. He wanted to be a professional fighter.

“All my teachers looked at me crazy,” Giannetti recalled. “But you know what? I grew up getting into fights, because kids were trying to pick on me. I might as well make some money. And, like, this sport’s still growing. It’s still in its infancy. There’s still so much money to be made, you know? I just want to take care of me and my family.”

Giannetti isn’t one of those fighters who has been a boxer or a wrestler his whole life. He did finally get into wrestling as a teenager, but he never felt it was his strongest sport.

“I started wrestling my freshman year of high school,” Giannetti said. “I wasn’t really good at it. My best year was my senior year, and I was still only a couple wins over .500. But I learned a lot of things that got me a good foot in the door [for] when I started MMA and jiu-jitsu.”

As with a lot of fighters, Giannetti’s foray into martial arts was through a coach and friend, Justin Burrill, who was 3-2 as a professional fighter at the time. Burrill and Bill Mahoney serve as Giannetti’s head coaches to this day at his camp at South Shore Sportfighting, south of the Boston area.

“Justin was actually one of my head coaches since I was a wrestler in high school,” Giannetti explained. “He was my senior-year high school coach and then he brought me over to South Shore to start training MMA. He’s been in my corner ever since. But we have a bunch of guys. I train with Manny Bermudez all the time. We have tons of people going in and out of South Shore.”

After a perfect seven-fight run as an amateur, Giannetti turned pro in June 2016. He opened up his career with a six-fight winning streak, which included all but one first- or second-round submission. This quick rise landed him on the 27th season of The Ultimate Fighter reality show, which aired in early 2018. He was the fifth pick on Daniel Cormier’s team during a season that consisted of all previously undefeated fighters.

“It was crazy,” said Giannetti. “I grew up watching that show, so being on it was kind of surreal. It was just a lot of hard work. They set a new bar. I thought I worked hard, but it didn’t come in comparison to what they do.”

Giannetti was very successful on the show. After first-round submissions of John Gunther and Allan Zuñiga, he earned a spot in the finals against Mike Trizano at the TUF 27 Finale in July 2018. After a three-round fight, Trizano emerged with a razor-thin victory.

“A bunch of people look back now, and right after the fight, [they] were like, ‘Oh, that was a split. That was close. You should have got it,’” Giannetti said. “Honestly, I really didn’t care, because my performance was so bad, I didn’t deserve it. Some people were trying to make an argument, but there was more of an argument that I could make. My only argument was that I could’ve performed better [and] then you wouldn’t have to worry about the split decision.”

After TUF, Giannetti was back in Cage Titans, where he had spent his entire pro career. He went 1-1-1 in his first three fights back and then strung together back-to-back submission victories. His last win came in January, when he stopped Roberto Yong at Cage Titans 47.

“I just need to capitalize on my opponent’s weaknesses,” said the 25-year-old. “[Yong]’s fought two big prospects from around here, and he gave both of them a run for their money. One of them was my teammate, Brandon Fleming. He has really tough fights, and I knew he was great on the feet, but I still felt confident enough that I could get the job done on the feet. But, I knew the quickest way to victory was to take him down and get the choke, so that’s what I did.”

Giannetti was lined up for a couple different fights when the coronavirus (COVID-19) pandemic hit. The fights got scrapped. Once he heard gyms were going to be shutting down, he started building one in his own garage and continued to train. Eventually, promotions started opening back up, starting with the UFC and eventually one of the UFC’s main feeder promotions, the Legacy Fighting Alliance.

The LFA started putting together cards for the Sanford Pentagon in Sioux Falls, S.D. In a change of scenery for Giannetti, he was offered a fight against Brant Moore. The contest serves as the LFA 89 headliner on Friday.

“I actually was already in talks with LFA, and I was hoping to fight sometime soon,” Giannetti revealed. “Massachusetts is really strict right now, so it doesn’t look like MMA is coming back anytime in the near future, which is disappointing. I reached out to Boston Salmon and asked for the [LFA] matchmaker’s information, and I threw in my name.

“We’ve just been talking since then, and he sent me Brant’s name. We watched a fight, and me and my coaches liked the style match-up, so we took it.”

Moore is currently 7-1 as a pro. He is riding a nice winning streak, and his last two wins came under the LFA banner.

Giannetti is still young and has a long career ahead of him. As a former TUF finalist who only lost by split decision, he could be just one decisive LFA victory away from a shot in the UFC.

“If I get this win on Friday night, maybe I’ll get a shot at the LFA belt,” Giannetti said. “If not, maybe a last-minute call to the UFC or the Contender Series. I’m down for whatever. I just want to keep fighting. It’s been way too long.

“People should definitely tune in if they want to see fireworks. I’m going to go in there to have a good time, and I want to just flow and have a good fight with Brant. I’m looking to attack, and I know he’s looking to get an early finish. I’ve heard him say it over and over again. I’m the same way. I’m not getting paid by the hour, so I hope we have a quick, exciting, violent fight.”

LFA 89 airs live on UFC Fight Pass on Friday night. Giannetti will have the spotlight on him as he attempts to score a big victory over a game opponent. A big win in the LFA has certainly proven to keep an athlete moving toward the UFC. After all, what else is he going to do? Get paid by the hour?