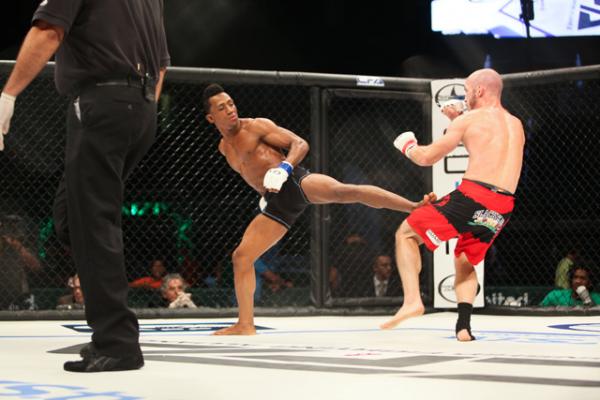 While the headlining bout leaves a lot to be desired — A prospect against a 2-6 opponent? Really? — the co-main event of Titan FC’s 63rd event should at least provide fans with one competitive spotlighted bout. The fight is for the vacant Titan FC flyweight crown, and it pits Christian Ynastrilla against Wascar Cruz.

The 24-year-old Ynastrilla is clearly the fighter being showcased in this contest. The Miami native, who fights out of American Top Team, went 5-2 as an amateur before shifting to the professional level in late 2017 at the Bellator MMA Series. His second appearance came at the CamSoda Legends event, a show hosted by a porn webcam streaming site where Ynastrilla met a 2-15 opponent. In early 2019, he suffered his first pro loss against his most difficult pro opponent, Edwin Sarria, who entered the fight with a 4-2 mark. The young flyweight has since rebounded with three victories, including two inside the Titan cage, but his opponents have included a winless seven-fight veteran and a 2-4 foe who tapped to Ynastrilla in the first round.

Cruz, who hails from the Dominican Republic, has been bouncing around the pro scene since 2009. By late 2013, he was 6-2 and set to meet Alexis Vila at the first Fight Night event from the Championship Fighting Alliance. “La Avispa” was submitted by Vila and then dropped his next CFA appearance on the scorecards against Bentley Syler. The 36-year-old has had his ups and downs since then, but he has managed to win more (4) than he’s lost (2). Cruz was able to edge the aforementioned Sarria on the scorecards where Ynastrilla failed. He also locked horns with Gustavo Balart, albeit in a losing effort.

While Titan has its sights set on featuring Ynastrilla here, Cruz is a decent bet to play spoiler. He’s a 16-fight veteran who has at least defeated a few fighters with significant winning marks. Unfortunately, he’s also very vulnerable to the submission finish. He’s been tapped on four occasions as a pro, including against Vila, Joel Lopez and Andre Barquero Morera.

This is a huge test for Ynastrilla. The young up-and-comer has been in a lot of fights against overmatched opponents. The only time he fought someone with a winning record of more than 1-0, he suffered his lone pro loss. If he can’t get past Cruz, it could be the end of Ynastrilla’s status as a potential prospect in the flyweight division. Fortunately for him, Titan seems to be banking on Cruz’s shoddy grappling defense to provide plenty of opportunities for Ynastrilla to find the submission finish. Ynastrilla will likely take advantage of what Cruz gives him and earn the belt via tapout.

The LFA’s 89th event boasts the most stacked field of prospects of any regional show in the United States this weekend, which should come as no surprise. The company prides itself as a developmental promotion and feeder league to the UFC. This weekend, it plays host to a lightweight main event between rising prospects Brant Moore and Joe Giannetti.

Giannetti’s name should ring some bells for MMA fans. The 25-year-old has already appeared on The Ultimate Fighter. He submitted John Gunther and Allan Zuñiga en route to the season 27 finale, where he dropped a split verdict to Mike Trizano. Despite his success on the reality series, Giannetti wasn’t retained by the UFC and landed back in Cage Titans, the organization where he spent a good portion of his amateur and pro career prior to his time on TUF. Giannetti added three wins, a defeat and a draw to his resume by early 2020. Now, he’s set to make his LFA debut.

Moore, who fights out of Texas, hasn’t had quite the same high-profile run. Instead, he amassed an 8-4 mark on the amateur circuit before turning pro in 2017. He actually made his pro debut with the LFA in a winning performance against A.J. Nichols. He then bounced around between a few smaller promotions and suffered his lone pro loss in his third fight when he was submitted by Lucas Clay. The 26-year-old found his way back to the LFA in 2019 and has added wins with the organization in his two most recent appearances. All five of his finishes as a pro have come via submission.

Moore is a huge threat on the ground, and he has already faced some solid competition. He’s a teammate of UFC veteran Derrick Krantz at Longview MMA and also represents Team 515. He could be a tough hurdle to clear for Giannetti, who has been defeated by both a fellow prospect and a middling veteran foe.

Giannetti’s run on TUF stands out as the best stretch of his career. In the aftermath, he suffered a loss to D’Juan Owens and fought to a draw with undefeated up-and-comer Josh Harvey. Two of his three post-TUF victories have come against sub-.500 opponents. He needs a win here, but this is no cake walk. The one thing working in Giannetti’s favor, however, is that he’s never been submitted. Moore, meanwhile, has suffered three losses via submission over the course of his combined amateur and pro tenures. Giannetti might just add another tapout to that tally.

The LFA might boast the deepest lineup of the weekend, but Poland’s KSW takes the cake for the biggest prospect set to compete this week. The league’s 54th event features two-division champion Mateusz Gamrot, who puts his lightweight title on the line against challenger Marian Ziółkowski.

Gamrot, who is still undefeated after 16 pro fights, is quite the regular in this preview series. He’s had high-profile fights against Norman Parke, Kleber Koike Erbst, Mansour Barnaoui, Marif Piraev, Rodrigo Cavalheiro and Andre Winner, to name just a few. Gamrot has always emerged with his hand raised, to the tune of five knockouts, four submissions and seven decisions. The 29-year-old Polish star added the KSW featherweight title to his trophy case with his win over Erbst and then settled his rivalry with Parke by adding a second victory over the former UFC fighter.

As crazy as it might sound, Ziółkowski is a downgrade in competition after Gamrot’s recent fight with Parke. The 30-year-old has competed at the pro level since a 2011 debut loss to Max Coga. He only joined KSW in 2018, when he already held a 19-6-1 record and had suffered three losses over his previous eight outings. His promotional debut ended in a submission loss to the aforementioned Erbst. Ziółkowski has since rebounded with victories over Grzegorz Szulakowski and Gracjan Szadziński. He was actually set to meet Parke last year, but he was forced to withdraw from the bout with an injury.

Ziółkowski has a strong ground game that has led to 12 submission victories. However, he’s struggled against many of the best fighters he’s encountered. Now, he’s set to fight one of the best Poland has ever seen. Ziółkowski’s best bet is to hunt for submissions, but he’s going to struggle to find one against such a skilled opponent.

Gamrot is a very well-rounded fighter. When he realized that takedowns weren’t the answer against Parke, he shifted into kickboxing mode and still managed to get the best of his opponent. Gamrot is likely to mix it up once again here. He’ll have to be extremely careful when grappling against Ziółkowski, but if Ziółkowski shows an ability to put Gamrot in danger, then we can expect the champ to return to a striking strategy. The Polish star will likely outpoint a game Ziółkowski on his way to another successful title defense and a decision victory.