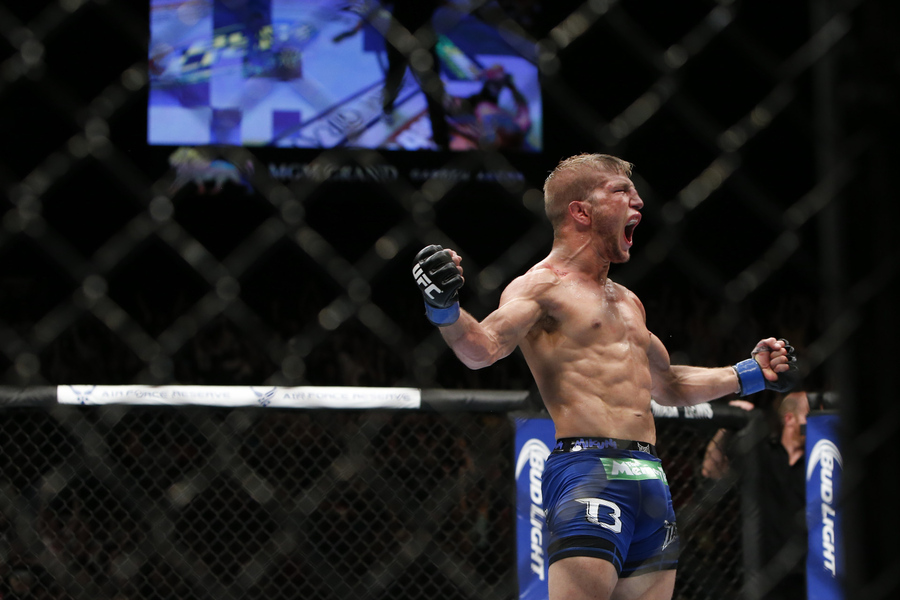 UFC bantamweight champion T.J. Dillashaw successfully defended his title with his second straight fifth-round stoppage, scoring a violent head kick finish of last-minute challenger Joe Soto. Dillashaw was active early, looking to find his range. He peppered Soto with short shots. Soto looked for a takedown and Dillashaw was able to take Soto’s back, but only for a moment. Late in the opening round, Soto found his rhythm and the pair engaged in a firefight as the round closed. Soto scored with a series of right hands to start round two, but Dillashaw was unfazed. Dillashaw increased his output as the round progressed. Soto connected with his jab, but Dillashaw continued to land. In round three Dillashaw fired with volume. He landed combo after combo and forced Soto to cover up. Soto failed with a takedown and gave up one of his own to Dillashaw. Dillashaw kept his pace into the championship rounds. He peppered Soto in round four and scored with a big takedown late in the frame. The challenger was desperate in the last round, as he dove for a takedown. Dillashaw stuffed it and unleashed a big head kick and series of punches that finished the fight.

Ultimate Fighter 13 winner Tony Ferguson did just enough to eke out a split decision over Sacramento’s Danny Castillo. Ferguson opened the fight with leg kicks to prevent Castillo from planting his feet. Castillo looked for his famed overhand right, but could not find an opening. When Castillo looked for a takedown, Ferguson locked on a d’arce choke that forced Castillo to defend for a lengthy period of time. Castillo escaped late in the frame and ended the round on top. Ferguson scored with his boxing early in round two, but Castillo again brought the fight to the mat. Castillo controlled the positioning, but it was Ferguson that scored with strikes off his back. It was more of the same in round three as Castillo spent the majority of the round in the top position. His only offense came in the form of a late arm-triangle attempt, but it wasn’t enough as two of the judges awarded Ferguson for his efforts off his back.

Bantamweight Bethe Correia remained undefeated, stopping veteran Shayna Baszler in the second round by TKO. Baszler closed the distance early and looked to bring the fight to the ground. Baszler pulled guard and tied up Correia on the mat. Correia defended the submission attempts and was able to stand. Baszler scored with a trip late in the round and attacked with a choke, but the bell saved Correia. In round two, Correia poured it on. She pinned Baszler against the cage and flurried with punches and elbows. Baszler absorbed the onslaught for nearly two minutes until referee John McCarthy halted the bout.

Brazil’s Carlos Diego Ferreira remained undefeated, stopping Ultimate Fighter veteran Ramsey Nijem in the second stanza. Nijem started off coming forward on the feet to force Ferreira to back towards the fence. Once Ferreira found his range late in round one, he was able to rock Nijem with a big shot and he looked for a finish. Nijem was able to survive and make it to the second round. Nijem continued to march forward and Ferreira again rocked him with a counter right hand. Ferreira attacked with a guillotine choke, but Nijem escaped and the fight returned to the feet. Ferreira connected with another big punch and referee Herb Dean stepped in to waive off the fight.

Lightweight Yancy Medeiros gave promotional newcomer Damon Jackson a rude welcome to the UFC in the first bout of the main card. Jackson came out very aggressive on the feet, but Medeiros quickly fired back to stop his forward advance. Jackson was able to close the distance and secure a body lock, but Medeiros was able to keep the fight standing. When the fighters separated, Medeiros began to find a home for his lead uppercut. In the second round, Jackson tried to open up on the feet, but Medeiros countered well. Jackson again looked to bring the fight to the ground, but Medeiros locked onto his neck. Jackson tried to spin out of the choke, but it only made the submission tighter and he went to sleep.

The night’s final prelim was a one-sided affair as wrestling stalwart Derek Brunson dominated striking specialist Lornez Larkin and claimed a unanimous decision. Larkin came out aggressive on the feet, but left his neck exposed and allowed Brunson to threaten with a guillotine choke. That allowed Brunson to gain the top position, which he maintained for all of the opening frame. Brunson’s takedowns were the story of the final two frames as he repeatedly planted Larkin on his back and stifled his offense. Brunson cruised to the win on the scorecards.

Heavyweight Anthony Hamilton earned his first UFC win with a dominant performance against South Africa’s Ruan Potts. Hamilton scored with multiple takedowns in the opening stanza and Potts slowed significantly as the rode wore on. In the second frame, Hamilton again took the fight to the mat and delivered a barrage of punches to Potts’ ribs. Late in the frame, the repeated shots paid off as the referee stepped in to hand Hamilton the TKO win.

In a battle of debuting lightweights, Chris Wade wasted little time in overwhelming Cain Carrizosa. Wade scored with a takedown early and then latched onto Carrizosa’s neck and choked him unconscious with a guillotine choke.