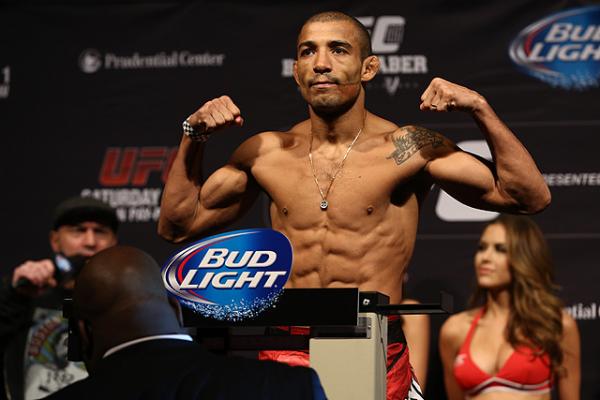 On Friday, Oct. 24, the UFC will host the weigh-ins for UFC 179: Aldo vs. Mendes 2 which takes place Saturday, Oct. 25, from the Maracanazinho Gymnasium in Rio de Janeiro, Brazil.

In the main event of the evening, featherweight champion Jose Aldo will defend his 145-pound title against challenger Chad Mendes in a rematch of their UFC 142 clash which Aldo won via first-round knockout. Since then, Aldo has defended his belt three times. The Brazilian edged former lightweight champion Frankie Edgar and Ricardo Lamas by decision, while stopping Chan Sung Jung by strikes. Mendes, meanwhile, is red-hot. The Team Alpha Male product rebounded from the first loss of his career to reel off five straight wins, including four by knockout.

The co-main event will feature a pair of light heavyweights looking to get back in the win column as Brazil’s Glover Teixeira locks horns with Phil Davis. Both fighters have been out of action since UFC 172 in April when Teixeira was battered by champion Jon Jones for five rounds, while Davis was outclassed by Anthony “Rumble” Johnson.

The fighters will hit the scales at 2 p.m. ET on Friday. A live video feed appears above (courtesy of the UFC), while the results appear below.

* – Each fighter was given one hour to make weight