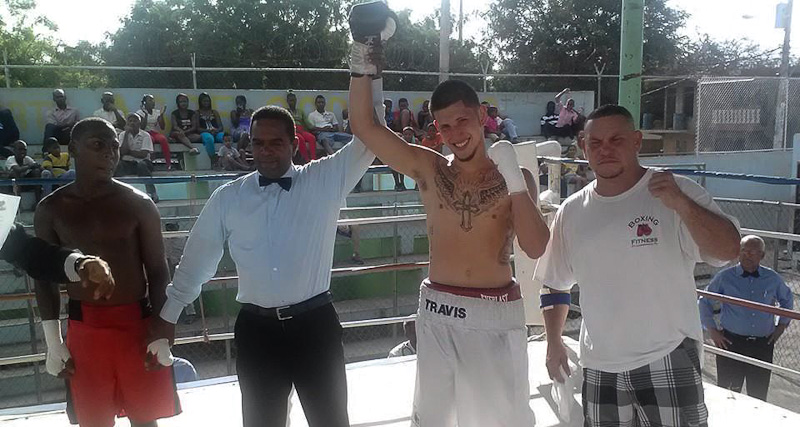 BKB 3’s Travis Castellon: No Backing Down in the Pit

When two men enter the boxing ring, it’s often said that there is nowhere for them to hide. Once they step through the ropes, it all comes down to whose fists can fly the fastest, hardest and most accurately.

Big Knockout Boxing — or BKB, as it is often called — has made the idea even more precise. Inside the BKB pit, there is literally nowhere to go. Fighters essentially have to go toe-to-toe and duke it out to prove who’s the better fighter. Sure, it’s unconventional, but for a fighter like Travis Castellon, it offers a whole new challenge, as well as an opportunity to truly kick-start his career. Castellon steps in that pit at BKB 3 on June 27.

“There is nowhere for you to go inside that small, circle pit” Castellon told Combat Press. “It’s great because there are no ropes and there is nowhere to hide. It’s designed for you to stand right in there and fight, and I’m prepared to do that. I sparred inside the pit last time when I was in Vegas and I did a lot better, you know. Without the ropes, there’s nowhere to go and there’s nowhere to lean on, so my movement and my footwork became twice as good.

“I believe there’s a good possibility I’ll win this next one by knockout. For 135 [pounds], I’m a pretty big guy and I feel really strong at that weight.”

While this is the first time that Castellon has fought inside the confines of the BKB pit, he does have 14 professional boxing bouts to his name. In 2015 alone, he has fought four times, stepping into the ring every month from January through April. His active schedule has taken him to the Dominican Republic for most of his fights. All but two of his career bouts have taken place outside of the United States.

“It was a lot easier to get fights over there,” he admitted. “Over here, there are a lot of competitions and you’ve gotta wait. Over there, I was able to fight back-to-back-to-back and build up my record really fast. Over here, you have to wait; you have to be accepted on a card; you’ve gotta have a manager. But over there, they’d just take me. So I could fight and stay active.”

Over the course of his three years as a professional, Castellon has ensured that he has stayed busy. His hectic schedule has allowed him to garner some valuable experience inside the ring, but how long can he go on fighting so often?

The busy schedule meant that Castellon had a choice to make. He could follow his dream in boxing, but it would mean that he would have to stop pursuing another passion.

“With boxing, it was an opportunity to make a lot more money and build up the pay a lot faster. And then, once I do get to the top, I have the money to open up my own business and I don’t have to work for somebody else.”

Castellon’s June 27 bout will mark just the third time that he has competed professionally in the United States. His first fight on U.S. soil resulted in a draw, and his second appearance gave Castellon his first career victory.

“I feel way more comfortable,” he said. “Being over in the DR [Dominican Republic] actually helped me relax my nerves when I step into the ring and helped me learn a lot. Over there, some of the fighters that I fight are actually better than the fighters over here, and I learn a lot more.

“I don’t let the outside affect me. That’s one of the things that I learnt from my first pro fight. I let the crowd, I let the atmosphere, I let everything get to my head. Since then, I haven’t let that happen. I just stay focused. And I hear one voice, and that’s my father’s.”

At this stage, Castellon is only signed on for one bout under the BKB banner. However, should the opportunity present itself for the 23-year-old, he’d certainly enter the pit again. In reality, he’s just happy to fight, and he will keep on fighting if the money keeps on coming in.

“They gave me the opportunity. It’s a good show and it’s on pay-per-view, so hopefully I get a lot of views out of that,” Castellon said. “If I do well in there, then hopefully it can open a lot more opportunities inside the traditional boxing ring.

“Once people see excitement and see what I’m capable of doing — from here it’s just about moving forward and keeping on getting better and working hard. If I win and they offer me more fights, I have no problem in taking them — against anybody. There’s nobody I’ll back down from. They could give me the No. 1 person in the world right now and I’d fight them. BKB or traditional boxing, either way, I’m stepping into the ring, no problem.”