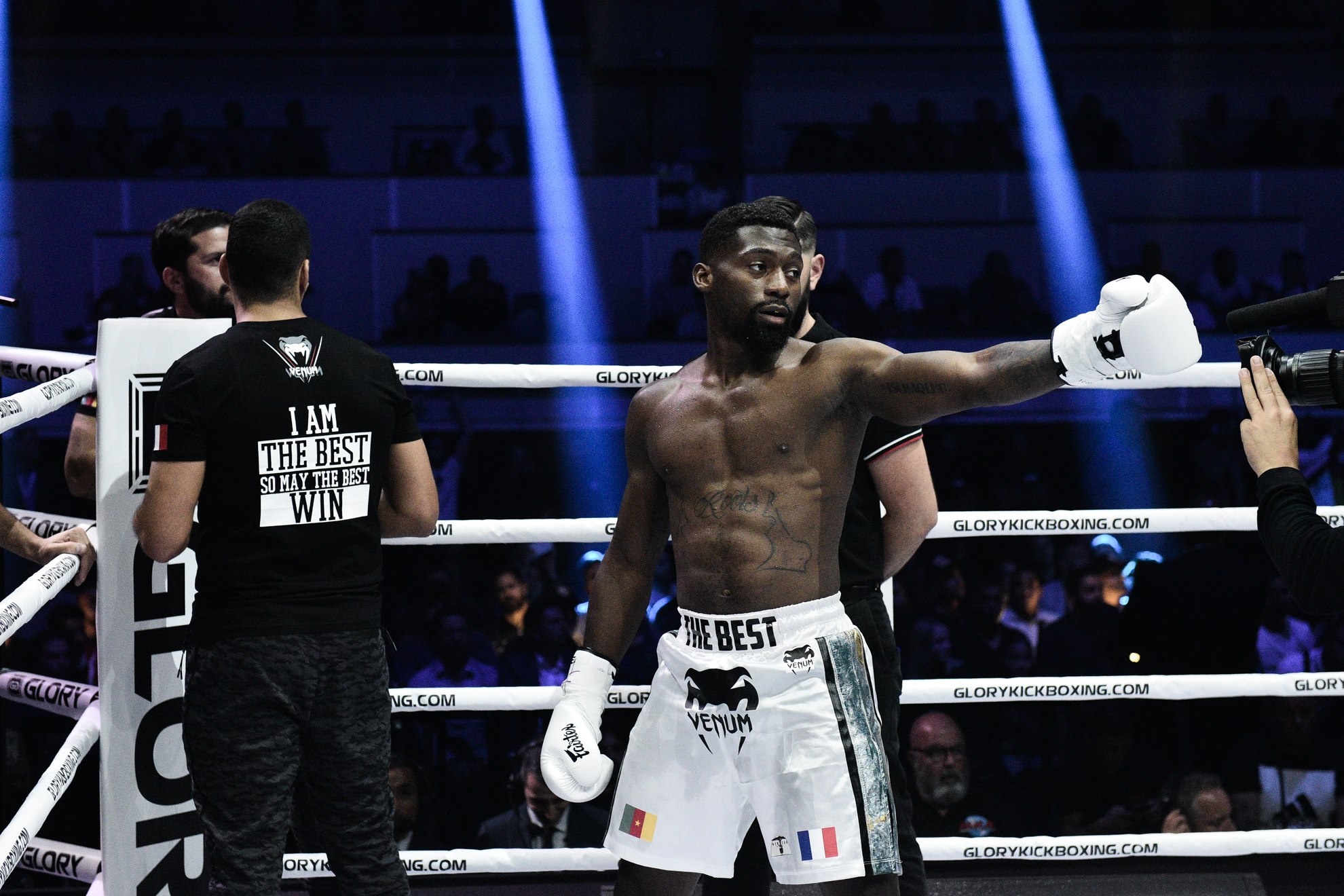 GLORY welterweight titleholder Harut Grigorian makes the second defense of his title against former champion Cédric Doumbé. Grigorian captured the crown from Murthel Groenhart at GLORY 50 and defended it for the first time against Alim Nabiyev at GLORY 54.

Gold is also on the line in the night’s co-headliner, where the world’s top-ranked female kickboxer Anissa Meksen defends her women’s super bantamweight title against Tiffany van Soest, the previous titleholder.

GLORY 64 kicks off with the preliminary card streaming live on the promotion’s YouTube channel and UFC Fight Pass at 11 a.m. ET. The SuperFight Series streams live on Fight Pass at 1 p.m. ET. The main card, also on the UFC’s streaming service, airs live at 3 p.m. ET.

Former welterweight champ Cédric Doumbé looks to regain his title when he takes on current titleholder Harut Grigorian. Will Doumbé get it done in front of his hometown fans, or will Grigorian further cement his place atop the GLORY welterweight division?

Grigorian doesn’t get the attention of some of the other GLORY world champions. However, his last two bouts have been among the most impressive performances in the promotion in 2018. The Armenian-Belgian earned his chance at the title with victories over France’s Karim Benmansour and Antoine Pinto during one of the last one-night contender tournaments. Prior to his tournament victory, Grigorian was knocked out by Murthel Groenhart in a controversial bout, which led to a rematch after Groenhart took the belt from Doumbé.

Grigorian captured the title with a dominant first-round stoppage victory over Groenhart at GLORY 50. The title-winning performance was one of the most dominant of the year against a fighter he wasn’t favored to beat. In his last bout, Grigorian put on a great performance against dangerous challenger Alim Nabiyev over the course of five rounds. The win opened up the debate of who could potentially dethrone the champ.

The first name to come to mind was Doumbé. The 26-year-old won the GLORY belt against Nieky Holzken in a culmination of his ”Fighter of the Year” award-winning performance in 2016. After defending his title against Yoann Kongolo and Holzken, Doumbé was upset by Groenhart via split decision at GLORY 44. He returned to the win column with a victory over top-10 welterweight Yohan Lidon, but then he lost a split decision against Nabiyev. Doumbé has gone on to rattle off three straight wins over Thongchai Sitsongpeenong, Alan Scheinson and Jimmy Vienot.

Grigorian holds victories over Tayfun Ozcan and Nordin Ben Moh in an impressive run that featured 16 victories in 18 bouts dating back to 2013. Doumbé has been on a similar roll, with 21 wins in 24 pro bouts since mid-2015. The clash of styles will make for an intriguing bout between two of the best in the division. Doumbé is a diverse counter striker who strings together his combinations better than most in the world. Grigorian is a knockout artist who can fight both aggressively and with a cerebral approach.

If Grigorian sticks to his game plan of forward pressure behind his punches, he might have the ability to shut down Doumbé’s offense. However, Doumbé is an excellent defensive fighter who has never been stopped in his 78-fight career. Doumbé will regain the GLORY welterweight title with a difficult five-round showing.

In one of the most anticipated rematches in GLORY history, the world’s No.1-ranked female fighter, Anissa Meksen, puts her title on the line against former champion Tiffany van Soest. Who wins?

This championship rematch will be contested between two of the best female kickboxers in the world. Meksen has clearly cemented herself as the top-ranked fighter thanks to an incredible record of 97 wins and just four losses. After a highly controversial decision loss to Jady Menezes at GLORY 56, Meksen recovered with a phenomenal performance in the rubber match to erase any doubt that she is the better fighter. Meksen stopped Menezes in the second round with a relentless pace and non-stop forward pressure.

Van Soest has been far less active than the current titleholder. The American won the title with three victories in the span of seven months. The 29-year-old defeated Esma Hasshass, Jessica Gladstone and Amel Dehby to become the inaugural super bantamweight champion. She defended her belt once against Meryem Uslu a month after Meksen made her promotional debut. After dropping her title to Meksen in December 2017, van Soest has only fought once. She picked up a huge win over talented Muay Thai champion Sofia Olofsson at GLORY 55.

In their first fight, Meksen was able to work her varied attacks from the outside. She employs a style that focuses on switching up her stance, throwing diverse offense, looking for counter opportunities, and ultimately out-throwing her opponents. Van Soest was the aggressor in the bout. She pressed forward with boxing combinations and worked on the inside when able. Meksen edged out the decision victory in the back-and-forth championship bout.

Meksen has been the far more active fighter in the past two years. She has won 11 bouts since the beginning of 2017, whereas van Soest has only fought three times. Meksen’s resume of victories speaks for itself, but what makes her dangerous heading into this bout is her ability to attack her opponent from every angle for the entirety of the bout. Van Soest is going to push Meksen, but Meksen will come out victorious once again to inch even closer to her 100th career victory.

What is the sleeper fight on the card?

There are plenty of great fights here, many of which include current and formerly ranked opponents. The featherweight division is well represented on the undercard, with two great, closely matched bouts.

The first contest features top-10 featherweight Abdellah Ezbiri in his return against former interim title challenger Anvar Boynazarov. Uzbekistan’s Boynazarov is out for revenge against Ezbiri, who defeated him in 2017. France’s Ezbiri has won three of his last four fights. His lone loss came against current titleholder Petchpanomrung Kiatmookao. If Ezbiri puts on a strong performance against the grizzled veteran, he will move into position to potentially meet the champion again.

The second bout pits talented Russian Aleksei Ulianov against the well-traveled Massaro Glunder, who has fought many of the best fighters all over the world. Ulianov started his GLORY career on a two-fight skid, but he has since turned it around against Shoot Boxing S-Cup champ Zakaria Zouggary at GLORY 59. Glunder fell short against former champ Kevin VanNostrand in his last bout. However, he picked up wins over Victor Pinto and Quade Taranaki in his prior fights. This bout is destined to entertain. More importantly, the winner will push his name back into contention in a wide-open featherweight division.