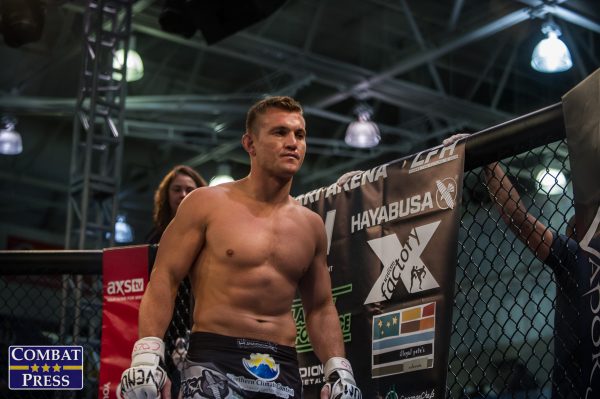 Wait. What high life are we talking about? Miller? Dope? Altitude? Gambling? An accomplishment? Maybe a combination of a few? Either way, it’s not called “a high” because it brings you down, but not all highs are as good as they are cracked up to be.

Colorado native Ian Heinisch has been on all ends of that spectrum. He has a widely publicized backstory that includes international drug trafficking, crossing between continents and spending time in a Spanish prison. There was the rush of sale, the accomplishment involved with a successful delivery, and, of course, the drug usage that came with it. The down side? He had to fend for his life in foreign confinement.

After arriving back in the United States, Heinisch had the high of alcohol and prescription medication, which came with its own set of lows. However, that habit finally came to an end after his sole loss as a professional fighter in September. He was expected to beat Brazilian Markus Perez. The victory would bring with it the Legacy Fighting Alliance middleweight title and a subsequent UFC contract. Unfortunately, Heinisch ended up tapping out in round one, and his opponent slid into the Octagon instead.

“My mentality changed after my loss, and that’s what’s new with me,” Heinisch told Combat Press. “Training’s good, and I’m always getting better.”

After the loss, Heinisch took the necessary steps to clean up some loose ends in his life. Whatever he did seemed to work. He came back in January with a second-round knockout of Daniel Madrid at LFA 31. He felt that high of accomplishment once again. This time, though, it was a good high — much better than the accomplishment of international smuggling, because it was something he could be proud of doing. After going 8-0 as a pro, he had become complacent. He expected to win every fight. However, the setback put things back into perspective.

MMA is a different kind of sport. The highs are very high, but the lows are extremely low. It’s how the fighter bounces back from adversity that really showcases their level of professionalism. Heinisch is no stranger to adversity, and he bounced back extremely high with his latest win. It has led him right back into the LFA title hunt.

On Friday night, LFA 39 lands in the world-famous mountain destination of Vail, Colo. Heinisch headlines the card. He faces a familiar foe, Brazilian Jiu-Jitsu black belt Gabriel Checco, for the LFA interim middleweight strap. Heinisch is very familiar with the town of Vail, which is only a two-hour drive from his hometown in Denver.

“My dad works for Vail Management and he does the roofs up there, so we get these discounted rates on condos,” Heinisch explained. “I used to go up there a lot, especially when I was on probation and couldn’t leave the country. After my fights, I wanted to go on vacation, and my destination was Vail. I would go there a lot. I’ve been going there for years, and now I’m on the main event there, years later, at the Dobson Arena. It’s a town I love, and I’m very familiar with [it]. I know a lot of people there. I’m excited.”

The John A. Dobson Ice Arena is famous for hosting the World Figure Skating Championships. It also hosts a number of other events, ranging from hockey games to concerts. LFA 39 will be the promotion’s first stop at the venue. At over 8,000 feet in altitude, it’s, by far, one of the highest events this year.

“When we saw Checco accepted this fight, we kind of laughed, because I don’t know if he thought this through,” Heinisch said. “Vail’s about 9,000 feet above sea level — almost double Denver — and, for me, it’s not going to be a huge difference. I’ve been going up to Vail, doing some runs and some cardio up there. I’m used to it. I don’t know how it’s going to affect him. I know if I’m patient, the later the rounds go on — his gas tank is already suspect as it is — but this is something he’s never experienced.”

Heinisch has firsthand experience with his next opponent. In September 2016, his teammate Adam Stroup fought Checco at RFA 43. Things did not go Stroup’s way. After getting the best of Checco for nearly two and a half rounds, Heinisch’s fellow Colorado native got caught in a leg lock by the Brazilian and had to tap.

“I was planning on fighting [LFA middleweight champion] Anthony Hernandez, but he took a leave of absence or whatever, and now he’s on the [Dana White’s Tuesday Night] Contender Series,” Heinisch said. “I cornered Stroup when he fought Checco two years ago in September. Stroup was obviously dominating him and then got caught in the third round in that kneebar. I looked over at my coach [Marc Montoya] and said, ‘Coach, I want to fight this guy.’

“I got his name two months ago, and I was excited. I’ve been wanting this fight for a while. It’s a great match-up for me.”

Checco is an extremely tough opponent, as he showcased in his last fight. However, that last fight was over 19 months ago. Checco was twice scheduled for appearances on DWTNCS last summer, and twice backed out. When his name was announced to headline the Vail card, it sort of came out of the blue.

“He kind of disappeared off the map,” Heinisch said. “Maybe he was training hard [or] maybe not, but it doesn’t matter. I honestly feel like this is my time. Everything has led me to this fight. I’m excited to put on an impressive victory and get that belt around my waist. I’m going to stay home — no vacation — [and] keep training, and I’m expecting a short-notice fight for the UFC — hopefully, the Chile card two weeks after.”

The UFC has been within arm’s length of Heinisch on multiple occasions in the past, but he has yet to crack into the big show. UFC Fight Night 129 marks the promotion’s debut in Chile on May 19, and there are definitely some spots that Heinisch could fill, should somebody pull out. His past highs in South America were nefarious in nature, so the world traveler is looking to generate a more positive energy on that continent as well.

“After my fight, I want to go on a big trip to South America, but I’m going to wait until after the UFC,” Heinisch said. “Hopefully, I’ll get to fight in Chile. There’s four middleweight fights on that. I’m not looking ahead, but I am planning ahead. All my fights in LFA have been finishes, and I’m looking to continue that. I think it’s my time to move on. I’m 9-1, and I don’t see how the [UFC] matchmakers could deny me. My passport’s ready to rock.”

First things first. The immediate matter at hand is Checco. The Brazilian got punished by Heinisch’s teammate for most of the fight, but there was a heel hook to end the first round, which was essentially saved by the bell, and even as a bloody mess in round three, the black belt still snagged a leg and finished the fight. Heinisch trains at Factory X Muay Thai in Englewood, Colo., where longtime black belt Mario “Busy” Correa is the head BJJ coach. This complements well with Heinisch’s history as a state-champion wrestler. For this camp, he has also brought in some additional training partners to avoid the pitfalls he witnessed in Checco’s last outing.

“[UFC veteran] Zak Cummings was a great look for me,” said Heinisch. “He’s obviously a [BJJ] black belt, way better striking than Checco, he’s a southpaw [and] he’s short, so that was a good training partner. My last training session was with Gilbert Smith, who I believe also has better striking and definitely better wrestling. He’s also a high-level brown belt.

“I did a lot of work on leg-lock defense, and I’m pretty good at avoiding that stuff, because of my wrestling. I brushed up on that for a month and then focused on what I’m good at.”

A lot of preparation has gone into preparing Heinisch for his next headline battle. In addition to the occasional cardio training at over 8,000 feet, he has been able to get some local marketing done as well.

“I went up to Vail with [Carmen Sage], who is making her debut,” said the Colorado native. “She’s actually from Vail, and her first fight is there. Me and her walked around to about 40 to 50 businesses and just kind of talked to the people, put flyers up, put posters in the stores, and they are ecstatic. They’re pumped up, and that’s cool to see that the town is excited.”

Heinisch has come a long way since his periods of transgression. The highs he chases have shifted from shady activities to positive ones. He can’t wait to get his Rocky Mountain high going on Friday night. A win will get him one step closer to the ultimate buzz for a mixed martial artist — fighting in the UFC.