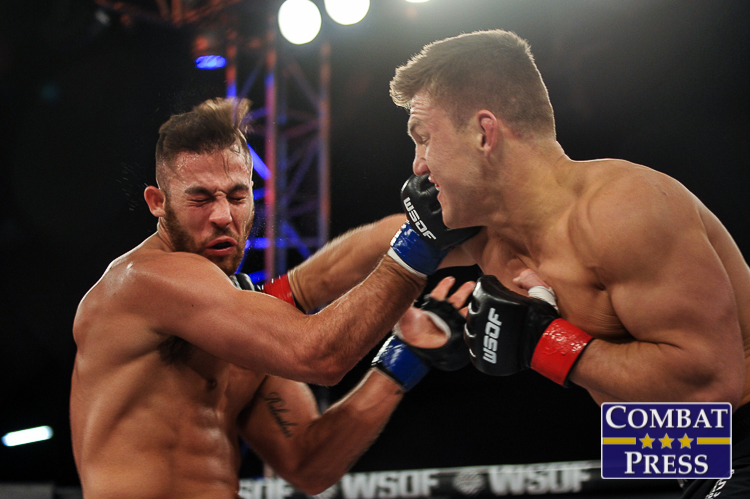 Just like “orange is the new black” or “40 is the new 30,” COVID-19 is the new injury bug. In MMA, short-notice replacements and fight cancellations have long been due primarily to injuries. However, since the UFC came back online in May 2020, COVID-19 has been the primary affliction ravaging fight cards. One particular UFC middleweight match-up was impacted by both injury and the virus.

In June 2020, Ian Heinisch was scheduled to face Brendan Allen at UFC on ESPN 12. Heinisch was coming off a first-round submission of Gerald Meerschaert only three weeks prior after suffering back-to-back losses in the second half of 2019. Allen, on the other hand, was riding a six-fight winning streak and looking forward to a huge opportunity against a ranked opponent. However, less than two weeks before the fight, Heinisch had to pull out due to an injury.

In November, the two men were once again set to meet, this time at UFC on ESPN 17. On the day of the fight, Heinisch tested positive for COVID-19 and again had to pull out of the bout.

“I started feeling sick,” Heinisch told Combat Press. “I was willing and able to fight, but I was unable to produce a negative COVID test. They pulled the fight, and I was super bummed.

“I tried to fight two weeks later, but it didn’t work out. He said he was busy, blah, blah, blah. He went and got knocked out the week after, and Sean Strickland got the [$50,000] bonus. Hats off to Sean on a great performance, but I felt like that was my knockout.”

Heinisch was not happy, but an even better opportunity arose for him. A week after he was supposed to face Allen, he found out his next opponent would be former title challenger Kelvin Gastelum. The fight was originally slated for January, but it was then moved to the main card of UFC 258, which takes place on Saturday, Feb. 13, in Las Vegas.

Gastelum, who is currently ranked eighth in the UFC middleweight division, has lost his last three fights. It started with his interim title bid against Israel Adesanya in April 2019. He then suffered setbacks against Darren Till and Jack Hermansson.

“Obviously, he’s fought the who’s who,” Heinisch said. “He fought for the belt. He’s coming off a three-fight losing streak, which makes him extremely dangerous. He’s got his back against the wall. But, stylistically, I like it. He’s always had issues with big, strong wrestlers, and I think I can impose my will on him. I’ve boxed so much, I think I’m going to be able to hold my own on the feet. I’m just going to be very good at mixing things up.

“Last year, they got to see the ‘Hurricane 2.0’ in just a minute and 15 seconds. All the improvement, all the changes, all the different gyms, all of the knowledge I’ve learned — this year, you’re going to get to see a more active ‘Hurricane 3.0.’”

Heinisch left his long-time camp in Denver over a year ago to work on his game with his training partner, UFC veteran Nate Marquardt, in Thailand. However, shortly after making that move in early 2020, the COVID-19 pandemic hit. Both men had to get back to the United States before everything started locking down. Upon his return, Heinisch started working with striking coach Jacob Ramos at Genesis Training Academy and Professor Peter Straub, a Brazilian Jiu-Jitsu black belt out of Easton Training Center who also works with members of the Elevation Fight Team.

Heinisch has always had his sights set on a return to Thailand. With travel restrictions and mandatory quarantines still in place, though, that’s not really an option right now. He did travel to Las Vegas to cross-train with Xtreme Couture for his last camp, but he decided to forgo any trips this time around.

“I just wanted to be around my coach, Jacob Ramos, and it just seemed to work out,” Heinisch said. “I was going to go back and forth, but I felt like that lowered my immune system a little.”

Gastelum brings a unique style to the cage. The Ultimate Fighter alum has a junior college wrestling background and a black belt in jiu-jitsu, but he’s also had six knockouts among his 15 professional wins. Gastelum has never been knocked out, either. His only two stoppage losses came via submission to the aforementioned Hermansson and former middleweight kingpin Chris Weidman. Gastelum is a southpaw, too. Heinisch believes he’s ready for all that Gastelum brings to the Octagon.

“Camp’s been great,” Heinisch said. “It’s been bomb. It’s just been savage. We’ve been pushing. I’ve been getting so many different looks, so many different people. We’ve got Chris Camozzi training with us full-time. I’ve got a few sparring rounds with Drew Dober, who has a very similar style to Gastelum. Sean Choice, the GLORY kickboxer, has been a great southpaw for me.”

Another interesting aspect that really sits in Heinisch’s favor is that Gastelum, while less successful in his last few outings, still sits higher in the rankings than the Colorado native.

“At the end of the day, you could get too caught up in the rankings, the money, and everything about it, but it’s back to the first love of just MMA and accepting a huge challenge,” Heinisch explained. “I think he deserves his rank, because he gave the champ the hardest fight he’s ever had in the UFC and he’s beat some of the best in the world. He’s earned his spot. To bring him further down, people are going to have to take it from him.

“That’s what I plan on doing.”

Heinisch has come a long way since he fought on Dana White’s Contender Series in 2018 to earn his first UFC contract. He now holds decision wins over Cezar “Mutante” Ferreira and Antonio Carlos Junior. His losses came to Omari Akhmedov and Derek Brunson. The win over Meerschaert got him back above the .500 mark with the promotion, and a victory over Gastelum will certainly put him in a top-10 spot. However, regardless of the outcome, the natural nomad has no plans to stay put in Denver.

Heinisch loves his coaches and plans on sticking with those who help him be successful, but his buddy Marquardt headed down to Florida to train at Sanford MMA with some of the best in the business a couple of months ago. As history repeats itself, Heinisch plans to follow suit after this fight.