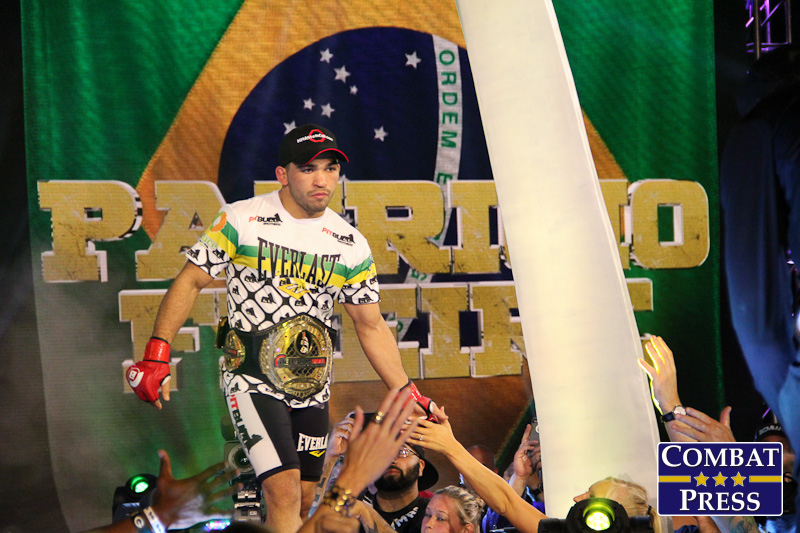 Bellator returns with a fully loaded main card for Bellator 145 at the Scottrade Center in St. Louis. The card is headlined by two title fights and includes three more fights containing some of the bigger stars on the roster.

The main event is the trilogy fight between champion Patricio “Pitbull” Freire and Daniel Straus. The two had a great fight back in January that ended with Freire keeping his title against a tough Straus. Straus looked to possibly be the new champion before giving up his back to Freire, who locked in the rear-naked choke.

In the co-main event, the second title fight on the card pits lightweight champion “Ill” Will Brooks against the young Marcin Held. At only 23 years old and riding a six-fight winning streak, Held will get a shot at Bellator gold. Brooks defended the undisputed title with a unanimous decision win in his last fight against Dave Jansen.

Bellator brings two more of its big stars in separate fights. Heavyweight wrestler Bobby Lashley takes on veteran Josh Thompson in a rematch of their 2012 match-up from the Super Fight League. Also on tap in a lightweight battle is hometown favorite and former Bellator lightweight champion Michael Chandler, who takes on David Rickels in yet another rematch.

Strap in, folks, as this is going to be a good fight. This is the third clash between Patricio “Pitbull” Freire and Daniel Straus. Pitbull has won both of their previous fights.

Their last fight is so recent — it took place a little under 11 months ago — that we should have a good idea how this one goes. Straus looked great in the fight before Freire was able to get the rear-naked choke for the victory. It was very disheartening to watch, considering how well Straus was handling the rematch.

While it was his second loss to Pitbull, Straus showed some striking skills against somebody who, on paper, is supposed to be the better fighter. Freire was able to do the same by landing takedowns against a guy, who also on paper, should be the better wrestler.

Straus found a home for his left hand a lot in the fight and definitely did well in controlling the action with his striking. The big difference-maker here will be if Straus can avoid making mistakes like he did in the second fight. Straus lost points due to repeated low blows, and the finishing submission came when Straus exposed his back while going for a kimura.

Gut feeling says Straus overcomes the simple and very easily corrected mistakes he made and takes the fight by unanimous decision. Straus was able to land some hard shots on Freire as well, so a knockout could also very much be in the cards.

This is a very interesting fight, considering the wrestling of Will Brooks could very easily be negated by Marcin Held’s submissions and overall grappling ability.

Held is a great submission specialist, specifically with his leglocks. Held has 12 submission victories, including one in his last fight against Alexander “Tiger” Sarnavskiy. Of course, when we talk about a grappler, their weak point tends to be in their striking. The same is true of Held, although over the course of his last few fights we can see some improvement in his striking. Even if Held were to lose this fight, he has so much ahead of him still that this will only be a momentary setback. His submissions should be able to keep him near the top of the ladder and definitely allow him to give Brooks a run for his money on the ground.

Brooks should look to avoid the ground at all costs. Held has tended to get the better of scrambles against his opponents. Held also has a very dangerous guard, as Derek Anderson found out when Held secured a triangle choke in their fight.

Brooks demonstrated some solid striking while dispatching of Michael Chandler. His stand-up game still needs some improvement, but he has shown some great strides over his last few fights. The 29-year-old could also provide some great resistance with his takedown defense, which has been solid so far during his time with Bellator, and keep Held standing.

This is a great test for both Brooks and Held. Brooks is probably the best lightweight outside of the UFC, however, and he should be able to take the decision victory.

Chandler and Rickels previously fought at Bellator 97 during Chandler’s unbeaten run as Bellator lightweight champion. This fight should play out in a similar fashion to their first meeting, where Chandler took less than a minute to knock out Rickels. That’s not to say that it will be that quick, but it will have the same outcome.

Chandler is coming off a win over Derek Campos in his last fight after dropping three straight fights (one to Eddie Alvarez and two to Will Brooks). Chandler took just over two minutes to submit Campos for his first win in almost two years. The 29-year-old seemed to have regressed during that three-fight losing streak, but it may have been more of a confidence issue than a lack of progress.

Rickels is a fun fighter to watch. He has 10 finishes on his record, but he has trouble getting over the hump against the top of Bellator’s roster. The 26-year-old’s three losses came against Chandler, Karl Amoussou and Patricky Freire. Those are some of the better names Bellator has collected on its roster over the years. In his last fight, Rickels went up against John Alessio in June. The contest ended early due to a knee to the head of a downed opponent. It seemed to be an accidental misplaced knee that didn’t land in the spot Rickels wanted, but it was enough to end the fight.

Just as in their first encounter, Chandler will take this by TKO.

We’ll make this short and sweet since, well, there really isn’t much to talk about besides James Thompson being a name to help “legitimize” Bobby Lashley’s record. Add in the fact that Thompson already has a victory over Lashley and it makes the fight more interesting.

Lashley has been on the outside looking in for whatever reason at heavyweight. He hasn’t really faced the best in Bellator’s heavyweight division, in other words, and Thompson will now be the most recognizable name on his record. Lashley is a big, strong and powerful wrestler who will completely gas opponents out if they let him take them down. That is really the only discernible game plan here. It would be shocking if Lashley did anything else but try to get this fight to the ground and smother from top control.

Thompson has fought once before in Bellator, beating Eric Prindle by TKO in the first round. He has been in MMA for quite some time, fighting against various promotions’ top fighters. Thompson does hold a decision victory over Lashley at Super Fight League 3 in 2012, but add in the time off since his fight with Prindle — Thompson has had over a year out of action — and things shape up a little differently.

This is a fight Lashley should win. Bellator wouldn’t risk him against Thompson if the organization didn’t think he had a good shot at coming out with his hand raised. His name value is too much for Bellator to put him in jeopardy, especially considering how little notoriety Bellator’s heavyweight fighters have. Lashley should pull out the decision victory.

Bellator pairs up-and-comers Justin Lawrence and Emmanuel Sanchez to kick off the main card. With the featherweight division seemingly rotating through the same couple of fighters, these two could provide some fresh faces to the top of Bellator’s 145-pound division.

Lawrence was highly touted on The Ultimate Fighter 15. He was in his early 20s at the time and seemed to have a world of potential ahead of him, with his kickboxing and boxing helping to draw attention. However, Lawrence was knocked out by Michael Chiesa, the eventual winner of the season, in the quarterfinals and never really strung together much success in the UFC. Lawrence would go on to win in his UFC debut on the TUF 15 Finale card, but dropped back-to-back fights against Max Holloway and Daniel Pineda. The 25-year-old seems to have put things together by winning his past four fights since leaving the UFC. Lawrence made his Bellator debut in June at Bellator 138 against Sean Wilson. Lawrence was able to dispatch Wilson with only four seconds to spare in the first round.

Sanchez is certainly going to be a tougher opponent than Wilson was for Lawrence. The Roufusport product has five submission victories, and the ground game is where he will be most likely to win this fight. Sanchez is a well-rounded fighter, but standing with Lawrence is a very bad idea unless, of course, you want to be picked apart for three rounds.

This could end up being a very close fight — at least one of the closest fights on the main card — but Lawrence will take the victory by way of a unanimous decision.