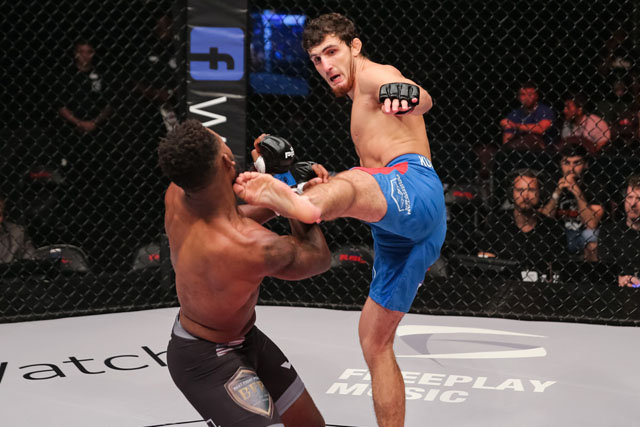 For the second year in a row, powerhouse Eldar Eldarov makes the cut on this list and for good reason. The Russian brute is an absolute animal that has dominated the competition under the BRAVE CF banner against some very quality opponents.

Eldarov is a talented grappler with excellent physical strength. He has outstanding takedowns and nasty submission grappling from top position, with ground-and-pound to boot. He fought just once in 2022, but it was an impressive kneebar win over Denis Maher. He also owns victories over UFC veterans Leonardo Mafra and Mounir Lazzez.

The combat Sambo vet is 31 years old, so he’s in the prime of his career right now. He can compete with a large portion of the UFC welterweight roster right now and give all sorts of fits to guys up and down the ranks.

Making his second appearance on this prospect’s series, Russian Ramazan Kuramagomedov is a name familiar to some, as he’s competed on the Contender Series. He’s moved himself to the UFC in recent years to train with Xtreme Couture and is primed for a run in a top MMA organization.

Kuramagomedov has improved his striking while in the USA, but his obvious bread-and-butter is getting the fight to the mat. He has excellent wrestling and technical prowess on the mat, as showcased by his handful of submission victories. He was passed up on by Dana White in 2019 after his controversial split decision win over Jordan Williams, but he’s since continued rattling off wins. He fought just once in 2022 at the beginning of the year for the Eagle FC promotion, where he scored a one-sided decision over UFC vet John Howard.

Kuramagomedov is still young, but he’s clearly a guy that the UFC could bring in now, and he’d be competitive. He’s not the same fighter he was in 2019 on the Contender Series, and seeing as his opponent in that fight was brought to the UFC roster means Kuramagomedov should be given a shot as well.

One of just a couple fighters who took a loss in 2022 to make this list, I think Carlos Leal has earned his way on this list despite said blemish. The Brazilian, who burst onto the scene this year, is clearly skilled and made the most of a last-minute opportunity in the 2022 PFL season.

Leal is a powerful and well-rounded fighter who had quite the busy 2022 and really established himself as s welterweight to watch. He started the year off with a pair of PFL Challenger Series wins, knocking out Contender Series vet Korey Kuppe before decisioning LFA vet Chris Brown. He was to be part of the PFL, but his spot never materialized at the beginning of the season. It only came about on late notice, as he fought and beat Ray Cooper III after Magomed Umalatov was forced to withdraw. He then was to fight Nikolay Aleksakhin, but it was again on late notice when Gleison Tibau withdrew, meaning Leal wasn’t really still considered part of the season. The Aleksakhin fight was cancelled, but he again got a late-notice call up to fight Sadibou Sy in the playoffs, where he was unfortunately defeated.

If I am Leal, I have to take all of those late-notice PFL fights and lack of being a main-roster member of the season to heart. Perhaps I take my talents to the UFC, who should be interested, given his crazy run this year. He would fit right in the crowded and talented UFC welterweight division.

Poland is a very good hotspot for MMA talent, and one of those fighters who is a part of that hive of talented fighters is Cezary Oleksiejczuk. The dark-horse, under-the-radar prospect has jumped onto scout’s radars in the past couple years and become a welterweight to watch in the European regional circuit.

Oleksiejczuk is very experienced for a young fighter, as he had 18 amateur fights before turning pro in 2018 when he was just 18 years old. Oleksiejczuk is a well-rounded fighter with good striking and the signature suffocating Polish ground game. He’s also a large welterweight at six-feet-three-inches tall, which is an advantage as well. In 2022, he went 2-0, besting Kamil Kraska by decision before knocking out Adrian Zielinski with a brutal kick to the body to finish his year off.

Oleksiejczuk is just 22 years old, meaning his best years are still ahead of him. His size, style and toughness lend him well in the cage and make him a tough matchup for many welterweights. The UFC should snag him now and build him up slowly, as he could be a player in that division in a couple years.

If there is a fighter that started his 2022 campaign off super promising but was a tad of a let down this year, it had to be Magomed Umalatov. Unfortunately for him, it was circumstances beyond his control, as visa issues removed him from being a top contender to win the PFL welterweight season.

Umalatov is an animal in the cage and very well-rounded. In addition to strong submission grappling, his striking is also fierce, as he possesses dangerous knockout power in everything he throws. His lone 2022 fight saw him derail a major prospect in the PFL season, one-punch knocking out Jarrah al-Silawi in the first round.

Umalatov is a blue-chip prospect that needs be on the UFC’s roster as soon as humanly possible. This guy could be a title contender within a couple years.