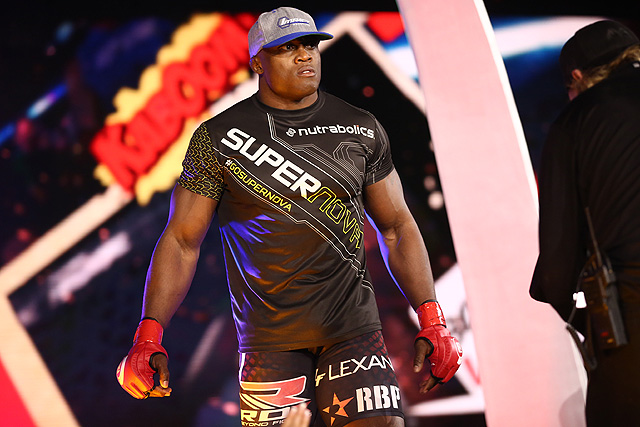 Bobby Lashley is among the most successful athletes in MMA today, but you’d never guess that from hearing the man talk.

In a sport where egos are nearly as large as the cage they fight in, Bellator MMA’s surging heavyweight kept a level head when speaking to media members after his Bellator 138 victory over Dan Charles.

“I’m a single father and I have two little girls who keep me grounded,” Lashley said to Combat Press with a smile.

At 6-foot-3 and a mammoth 239 pounds, Lashley is an imposing figure against nearly everyone he steps into the cage against. It’s part of the reason Lashley became a star in professional wrestling along with managing a MMA career.

It was Bobby the fighter mixed with a little bit of Bobby the wrestler who fought inside the Bellator cage Saturday night. No, Lashley didn’t cut a lengthy promo after the fight, but he did his best to deliver Charles to “Suplex City” after slamming Charles numerous times on the mat.

In the first round, Lashley held Charles against the fence but scored little damage in the process. Instead, Lashley opted to utilize his superior wrestling to hold Charles in place. Charles made it to his feet and avoided the slam on a couple of occasions (thanks to numerous cage grabs, no less) but he simply had no answers for Lashley’s grappling.

The second round was much of the same, except Lashley finally began to open up with his ground strikes. With Charles unable to do much of anything to deter Lashley, referee John McCarthy put a merciful end to the proceedings near the end of the round.

With Lashley’s muscle mass as a heavyweight competitor, cardio is always a concern. It became a lightning rod for critics to point to early in Lashley’s career, but the heavyweight fighter looked better in the second round of his Bellator 138 fight than he did in the first frame. Lashley believes he could’ve fought again after getting his hand raised in victory, a testament to his conditioning level.

“I have a great training partner in Alex Huddleston,” Lashley said. “We classify ourselves as a different kind of heavyweight. Along with Marc Montoya at Factory X, working with those two guys have made my cardio go through the roof. We’ve been working our asses off.”

With Lashley looking to get back into the Bellator cage relatively soon, it would appear as though MMA has become the main focus of the former WWE and TNA star.

“I just re-signed with Bellator, so I’m going to try and stay as active as possible,” Lashley said. “I’m not sure what’s next because the heavyweight division is so scattered, but hopefully I can get back in there within the next couple of months.”

Time is not an ally to Lashley, who is nearly 39 years of age. However, he’s 3-0 in the Bellator cage with a 13-2 overall record. He has a good relationship with Bellator President Scott Coker, who had previously promoted Lashley under the Strikeforce banner. Odds are that we’ll likely be seeing the grounded Lashley ascending to a new level of competition in the Bellator cage, with Bellator gold looming on the horizon.