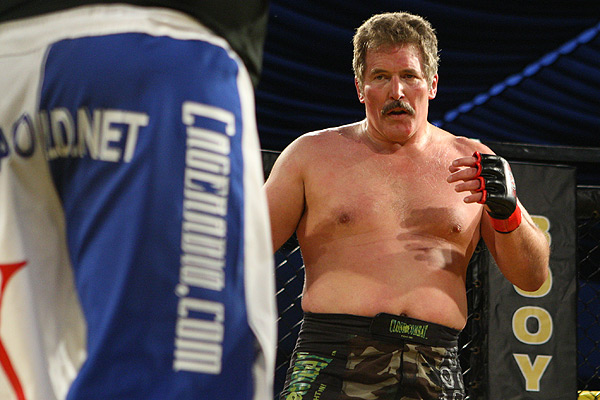 What If Pro Wrestlers Were MMA Fighters? Fantasy 64-Man Tournament – Round 3

A panel of writers from Combat Press, combined with some of our colleagues in the world of MMA and pro-wrestling media, have taken on this task. The match-ups were done based on the wrestlers’ real last names, alphabetically. The premise is simple: the fights are judged on UFC 1 rules and based on the combatant’s real-life martial-arts credentials and reputation for toughness in actual brawls and street fights. If you need to catch up, please check out the tournament’s opening-round match-ups and the tourney’s second round. Now, let’s continue with the third round of the tournament.

Max Freedman: “Expect del Rio to put up a fight, but he won’t be able to stay off his back and avoid receiving the vicious Lesnar ground-and-pound.”

Bryan Henderson: “This one is ridiculously difficult. Lesnar has a proven track record in MMA, which really carries him. They’d likely be pretty even in the wrestling department, but Lesnar’s bull-rush approach to MMA fights would be more than del Rio could handle.”

Riley Kontek: “Del Rio may have had Olympic-level wrestling by Mexico’s standards, but there’s no way he out-wrestles or outmuscles Lesnar. Lesnar with the sub-two minute TKO.”

Andres Magana: “Lesnar against del Rio would play out quite easily. Lesnar would bull rush del Rio, taking him down and landing vicious ground-and-pound before having the referee force him off of the once-masked luchador.”

Kyle Symes: “Lesnar smash. That’s about as clear cut as it gets this late in the tournament.”

Rob Tatum: “Lesnar is just too big, too strong and too athletic.”

The Lesnar smashing party continues. His wrestling and fighting experience, as compared to del Rio, is simply on another level. He’s also far larger than del Rio. Del Rio is a scrappy dude who would put up a respectable fight, but Lesnar would indeed bull rush del Rio, plant him on the mat and drop hammers until the referee had to pull him off. Lesnar would likely go on to cut a promo about Coors Light or something crazy.

Freedman: “This might be the first-ever MMA fight won via Tongan Death Grip, courtesy of Meng.”

Henderson: “I’ll always side with the technician, even if it’s in a battle with a crazy man.”

Kontek: “I want to take Meng here, I really do, but I just have a hard time believing he takes out an Olympic gold medalist in a bout that has even as limited of a rule set as UFC 1.”

Magana: “Angle’s Olympic-level pedigree would get him out of trouble even when Meng rocks him on the feet. While Meng may be vicious in an all-out brawl, Angle could still subdue him by tiring him out to the point of exhaustion.”

Symes: “Meng’s toughness will keep him in this fight a lot longer than most. Angle would use his wrestling and grappling skills to wear down the imposing Meng. Add in Angle’s legendary endurance during his peak WWE run, and this is a clear case of Meng hoping to land one big punch while Angle uses his grappling to get a decision win.”

Tatum: “Meng has a level of crazy that is going to be too much for Angle.”

The end of the line comes for the most legendary badass in pro-wrestling history. Angle’s Olympic wrestling and cardio would prove to be too much even for Meng. In a no-rules bout, expect Meng to bite, go for the eyes, go for the Adam’s apple and even go for the testicles. However, that can’t happen here. Angle shoots on him, tires him out, and runs him to a decision.

Freedman: “Riddle can hold his own with anyone, but Barnett is simply too big, strong and well rounded.”

Kontek: “Riddle fought at welterweight, whereas Barnett is a big heavyweight. Even with the strong wrestling and striking of Riddle, size matters. Barnett scores here.”

Magana: “Two true MMA fighters meet, and while many have fallen in love with Riddle’s recent resurgence in popularity, it cannot be denied that Barnett’s superior size and ground game would allow him to get the submission victory.”

Symes: “Riddle’s popularity has exploded in recent years since his move to pro wrestling. There’s no denying he’s a great athlete and could make it interesting for Barnett, but Barnett is the much bigger fighter. Barnett would likely avoid wasting any time with striking exchanges, too. I’ll take the bigger and more talented grappler in this one.”

Tatum: “Barnett has the size, skill and experience to dispatch of Riddle.”

As Scott Steiner once famously said, “SIZE DOES MATTER, BITCH!” Barnett is a heavyweight, whereas Riddle is a welterweight. Barnett’s size, catch wrestling and overall game would stifle Riddle, who would put up a good fight for a smaller guy. Barnett might be able to finish Riddle on the ground after tiring him out from top position.

Freedman: “Cardio and MMA wrestling finds Lashley coming out on top in this one.”

Henderson: “Prime Scott Steiner would be strong enough to hang with Lashley, and eventually Lashley would gas.”

Kontek: “Lashley is a proven MMA beast. That said, Steiner is a damn psychopath that has better wrestling than Lashley. He even has more physical strength, which is saying a lot. Steiner tires out Lashley and pounds him.”

Magana: “Although both men are tremendous wrestlers, Lashley’s slightly superior athleticism and cardio will allow him to pull off the win.”

Symes: “Can you imagine if either of these men had to pass a USADA test? The pee cup would melt like the blood from Aliens. Anyways, I think Lashley would win this battle of wrestlers based on the fact he’s actually had MMA fights. Steiner is insane, so maybe he goes after Lashley after the fight to knock ‘The Almighty’ out of the competition? Swerve, bro.”

Tatum: “Probably the toughest pick this round. I’ll take the lunatic (Steiner) in a close fight.

Cardio is key in this battle, and Lashley has tired out in past fights. Steiner is even stronger and just as athletic as Lashley, and he has better amateur wrestling credentials. This makes for a recipe for Steiner to move on.

Freedman: “Close, close fight, but I’ll give ‘The Beast’ the edge in this one.”

Henderson: “What a tough fight! Severn’s good, but Thesz is probably the more technical wrestler and would give Severn some serious fits.”

Kontek: “Thesz is a great wrestler, but Severn is a more well-rounded grappler. Add in his 100-plus fights, and you have your winner here in ‘The Beast.’”

Tatum: “‘The Beast’ has seen anything and everything; he might just win this thing.”

Two amateur shooters would face off in a tough battle. Both men have great wrestling, but the key seems to be Severn’s more diverse background. Thesz is as tough as they come, so Severn would have trouble getting the finish. However, he would do just enough to edge Thesz on the scorecards and keep himself in this tournament.

Freedman: “The submission skills of Shamrock will be the difference-maker in this one.”

Henderson: “A prime Shamrock is going to be a hard out for anyone, even Gotch.”

Kontek: “Even if Gotch could out-wrestle Shamrock, he’s not in the clear. Shamrock has dangerous submissions and more well-rounded grappling. He’s also the better striker. Shamrock succeeds.”

Symes: “This match-up is one for all of those ‘back in my day’ guys. It’s not going to be flashy. It’s going to be a gritty battle of wills between two wrestlers. I’ll take Shamrock, as I believe his submission skills and overall MMA skill set overcomes Gotch.”

Tatum: “Another longtime veteran of wrestling and fighting gets the nod (over the pure wrestler).”

Even with his high-level wrestling, Gotch would be unable to score a victory here. Shamrock can wrestle, but he is also more versed in submissions and striking. Don’t be fooled, though. Gotch, who is generally regarded as one of the toughest men in wrestling history, would legitimately give Shamrock a run for his money. However, Shamrock would score the win by either leg/armlock or a decision.

Freedman: “Inoki could snag a leglock, but Hodge is such a wildcard that he could score a knockout on the feet first.”

In the closest match-up of this round of the tournament, Hodge scores a win over Inoki. It would not be an easy out for Hodge, despite his skill set. Inoki could strike with Hodge, but there’s no chance he’d outgrapple him. Hodge’s wrestling would be too much for Inoki. Hodge keeps the old school alive.

Freedman: “‘Lethal Weapon’ uses a variety of leg kicks, takedown attempts and distance strikes to chop down the bigger Orndorff.”

Symes: “Orndorff is one tough hombre, and I don’t doubt he could take out Blackman if the two men met backstage at a WWE event. However, this is an MMA fight, and I’ll take the much more well-rounded Blackman in this battle.”

Blackman, the dark horse, lives on. It wouldn’t be an easy win — Orndorff is a legit tough guy who is as strong as an ox — but Blackman would beat Orndorff wherever he wanted, whether it’s in striking, wrestling or submission grappling. Blackman’s temper could be as bad as Orndorff’s, so it would be heated until it was over.