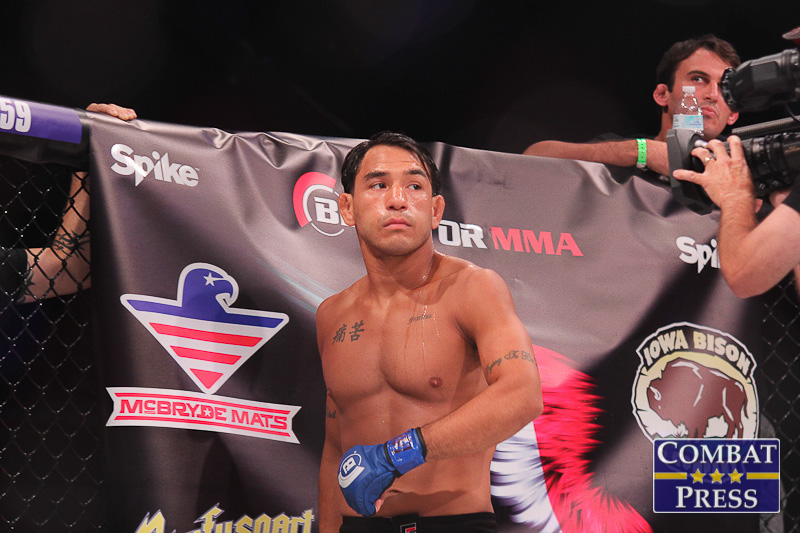 Work-life balance is one of the most difficult things to achieve, but with the right mindset, some people can create a synergy between the two. When work takes over someone’s life, he must create a life out of the work environment.

Bellator’s Emmanuel Sanchez is a full-time fighter. At age 26, he’s very young in life, but, with a 14-3 record as a professional mixed martial artist, he’s also a seasoned vet in the cage. What about his work-life balance?

“I hang out at home and watch fights,” Sanchez told Combat Press. “I live right across the street from the gym, so I walk to and from the gym. I teach kids’ jiu-jitsu class, and that’s pretty much it.”

There’s not much room for Sanchez to have a busy personal life. He trains at Roufusport in Milwaukee in an effort to earn his shot at the Bellator featherweight title. He channels his personal life into teaching kids who range from age four to 12.

“It’s a way of touching lives,” Sanchez said. “There’s more to life than fighting. The time I get to do this — to see these kids grow up and learn jiu-jitsu — is pretty awesome. I train with all these kids and they choke me out and beat me up, and I see a lot of myself, actually.

“These kids believe in themselves, and I believe in them. Some of these kids are getting bullied, so it definitely boosts their confidence, and that’s what gives me confidence as well — being able to be that confidence booster for people. We all need positivity, encouragement and that motivation to be great and go out and do all of the things we want to do.”

When Sanchez is not teaching kids or filling his small amount of time outside the gym, he is training hard for his next battle, which is arguably his toughest challenge yet. Tonight, at Bellator 175, he faces former bantamweight champion and longtime vet Marcos Galvão in a title eliminator fight. Galvão is a huge step in the right direction for Sanchez.

“I feel like I’m right there at the top,” Sanchez said. “I’m fighting another former champion, a guy who fought for the title, and a guy who was supposed to fight for the title. I’m fighting the biggest name that Bellator had to offer, and I’ve been doing that since I signed with them. I’ve been fighting guys that have been doing this since I was in junior high. These guys were professionals doing this in Bellator at the highest level. It’s a matter of showing myself and the world that I’m the best.”

Galvão is dangerous everywhere. He has a ton of experience, starting in Shooto and fighting across the WEC, Ring of Combat and Bellator organizations. Galvão submitted former champ Joe Warren to earn the bantamweight strap. This will be the Brazilian’s jump back to 145 pounds.

“I knew I wanted to be on this card, regardless of who it was, when it was, where it was,” Sanchez explained. “It was what I wanted, and I got it. When they said Galvão, I was like, ‘Wow, that’s a big name!’ He’s a great opponent, and I’m always motivated to fight the best and beat the best.

“He can throw leather, he’s aggressive, he goes for takedowns, [and] he’s great on the ground, so I’m anticipating and expecting everything, you know? I don’t look past opponents or think I’m going to walk through them. I believe and know that I’m better overall and all around, but I believe he brings a lot ot the table, too. I believe my speed, my size, my tenacity, my aggressiveness, everything will be a little too much for him.

“I can punch, I can kick, and I can do everything slick. I’ll jump, I’ll spin, I’ll do whatever to win. When I’m sitting around winning, man, I’ve said it once and I’ll say it again, this division is mine for the taking. I’m the champion in the making. I’m hungry, I’m motivated, and they can expect fireworks.”

Sanchez would like to thank all of his coaches and training partners at Roufusport, his family, friends, fans and sponsors. Follow Emmanuel on Twitter: @ElMatador145
Advertisement