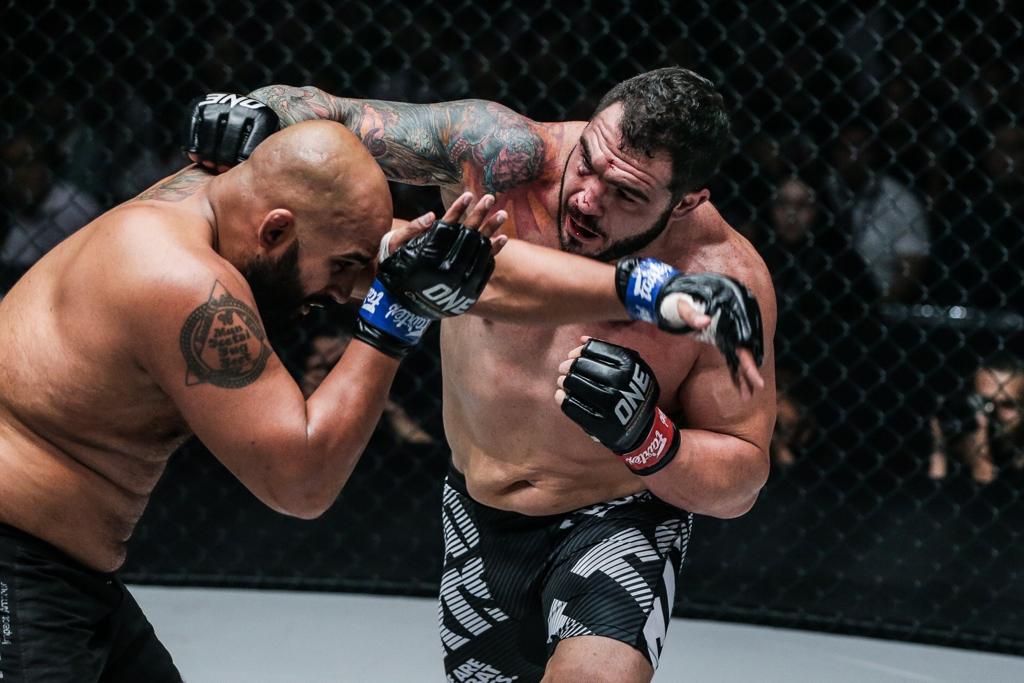 After an incredible night in Singapore that resulted in Capitan Petchyindee Academy capturing ONE Championship’s kickboxing bantamweight championship with a victory over Alaverdi Ramazanov, the organization returns to action on Jan. 29 for ONE Championship: Unbreakable II.

The show is headlined by a heavyweight MMA clash for the ages, as Mauro Cerilli meets promotional newcomer Abdulbasir Vagabov. Cerilli looks to rebound in his fourth ONE appearance after suffering a decision loss to Arjan Singh Bhullar in his most recent appearance. His Russian counterpart enters the ONE cage for the first time after compiling a 12-1 record.

The co-headliner is a flyweight clash between Japan’s Daichu Takenaka and Brazil’s Ivanildo Silva Delfino. Both combatants are coming off recent ONE losses and will look to return to the win column in a fight that is sure to deliver excitement. The two men have combined for 13 finishes and suffered just three losses between them.

The card also features a bantamweight clash between Chen Rui and Kwon Won II, both of whom are proven finishers. There’s also a women’s catchweight bout between Sovannahry Em and Jung Yoon Choi and a heavyweight scrap between Alain Ngalani and Oumar Kane.

In addition to a hefty share of MMA, the card also includes a light-heavyweight kickboxing bout between the always imposing Beybulat Isaev and ONE newcomer Mihajlo Kecojevic. Isaev is looking to rebound from a knockout loss in his ONE debut against Anderson Braddock Silva, while Kecojevic seeks to establish himself as an immediate contender.

ONE Championship: Unbreakable II starts at 7:30 a.m. ET and is composed of six fights. American fans can view the entire show for free on B/R Live. International fans can tune in on the ONE app.

Mauro Cerilli is a former Cage Warriors champion, but he came up short in a ONE title bid against Brandon Vera and has gone 1-1 in his subsequent fights. How will he do in his headlining contest against Abdulbasir Vagabov?

The 37-year-old Italian is making his fourth ONE appearance after posting a 1-2 record since joining the promotion in late 2018. After dropping a unanimous decision to Arjan Singh Bhullar in October 2019, the powerful Cerilli makes his return to the ONE cage in hopes of putting together a streak that will grant him an eventual shot at gold yet again.

Cerilli boasts a powerful frame and stands 6-foot-2. He has consistently put his power on display by finishing opponents via vicious ground-and-pound that is ultimately set up by a persistent offensive grappling attack. The Hammer Team veteran attempts to get his opponent to the ground, where he continuously pursues better positioning and unleashes thunderous ground strikes. In addition, he possesses an extremely powerful overhand right and knees capable of finishing even the most well-conditioned heavyweights on the ONE roster. Despite a rocky start to his ONE campaign, Cerilli is keen on returning to the cage and putting on a memorable finish. The only thing standing in his way? The ONE newcomer Vagabov, who enters the contest on a 10-fight winning streak.

The “Dagestan Machine” makes his ONE debut after compiling an impressive 12-1 mark on the regional scene. His sole loss came by way of majority decision in early 2016. The All-Star Training Center protege is an aggressive closer who has finished 92 percent of his opponents via either knockout or submission. The Russian boasts a slick armbar, power in both of his hands, and never-ending cardio that perplexes his opponents. Fresh off a pair of first-round submission victories and entering his prime at age 29, Vagabov will turn out to be one of the most memorable additions to a growing ONE heavyweight roster.

This bout could play out in numerous ways, depending on which of the two combatants is able to capitalize. Cerilli’s game plan will likely revolve around pressuring Vagabov with heavy strikes and clinch fighting in an effort to get to top position on the canvas, where he’ll then fire off powerful ground-and-pound in the early rounds. Meanwhile, Vagabov will seek to trade with Cerilli on the feet with the intent of landing precision shots to the body and slowing down the powerful Cerilli’s offensive grappling attack. Vagabov certainly has the submission grappling advantage, which he can utilize against Cerilli, who has fallen victim to an armbar submission in the past.

Despite Cerilli’s best efforts to rebound from a rocky start to his ONE campaign, he will fall short yet again. He’ll be unsuccessful in utilizing his offensive grappling. After the early rounds, Cerilli will begin to tire from multiple failed takedown attempts and the absorption of hard shots to the body from Vagabov. Vagabov will eventually drop Cerilli and secure the finish of his choosing.

Expect big things from the “Dagestan Machine” as he begins his climb toward an eventual ONE title shot.

Should fans have particular interest in the light-heavyweight kickboxing affair that’s sandwiched into this MMA-heavy lineup?

The bout features the debut of Serbian kickboxing sensation Mihajlo Kecojevic, who faces Russia’s Beybulat Isaev in a match that will surely deliver a memorable outcome.

Kecojevic is a recent ONE acquisition who joins the promotion after capturing the FEA Heavyweight Grand Prix title and compiling a 13-1 mark. The towering 6-foot-6 fighter is an aggressive striker known for his constant forward movement, powerful combinations, and relentless offensive attack. Kecojevic’s arsenal of weapons includes devastating knee strikes, a thunderous right cross, and various combinations that utilize his infamous reach advantage. The ONE newcomer attacks his opponent with various jab-cross combinations while mixing in inside leg kicks to overwhelm them. Then, he fires off his signature right cross or powerful knees in an effort to deliver the knockout. Once he smells blood, it is rare for Kecojevic not to turn up the heat and aggressively attack his opponent.

Isaev, a WBC Muay Thai world champion, has also won the European Muay Thai Cup and numerous other titles in both Muay Thai and K-1 rules. Isaev is an intimidating match-up for any light heavyweight due to his incredible speed and immense knockout power. The Russian boasts power in all of his limbs and has scored numerous knockouts via head kick and spinning back fist. He made his ONE debut in 2019 and suffered a knockout loss in the first round against veteran Anderson Braddock Silva.

Despite most ONE fans not being familiar with either kickboxer, this is a must-watch affair. Both of these combatants have a history of memorable finishes, aggressive styles, and, of course, knockout power.

The flyweight clash between Rui Chen and Kwon Won II. These two men have combined for 15 victories, including 11 finishes. Chen is coming off an impressive unanimous nod over Muhammad Aiman in late 2019. Kwon suffered a first-round submission loss courtesy of Shoko Sato a year ago. Expect both of these exciting flyweights to perform at their very best when they meet on Friday.