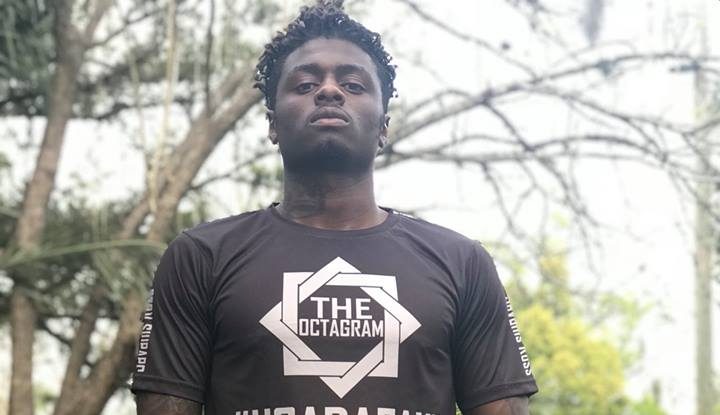 Pressure makes diamonds. Since his childhood, Javanis Ross, a resident of Starke, Fla., has been a diamond in the making.

Ross is currently a full-time professional mixed martial artist with a 4-2 record that he compiled after going 6-3 as an amateur. He’s never been stopped in his combined pro and amateur careers, but he really has no formal background in the sport.

Those two years of wrestling came in high school, but his foray into martial-arts training mostly took place in his own backyard.

“I had one guy from the hood that was my coach,” Ross explained. “He used to do amateur fights back in the day, so he showed me the basics. But that was like [for] a year and then I started doing my own thing.

“I had training partners throughout the years, but it was never consistent. I trained at Riot MMA for a year, but most of the time, I just freestyle it. I’ll stop by gyms and get some work in, but I’ve always been my own head coach. I just go to any gym I’ve been going to — Fusion X-cel, Team Trauma, Tito’s Boxing, 10th Planet Jiu-Jitsu. I bounce around to a lot of gyms.”

Despite the lack of a stable camp, Ross has been quite successful in a sport that chews up and spits out even some of the most highly trained competitors. In fact, not only has he never been stopped, but all of his combined wins have ended in finishes, including nine knockouts and one submission.

“It’s somewhat athleticism, and I’ve got a lot of experience as an amateur fighter, and I’ve had a lot of good match-ups,” Ross said. “There are a lot of things going into that 4-2. It’s hard work, I guess. A lot of it is good management, good match-ups, and my style of fighting.”

After kicking off his pro career on a three-fight winning streak, Ross suffered back-to-back losses in October 2018 and March 2019. While a loss at the pro level is never easy to stomach, he takes full responsibility for those dings on his record.

“The first loss I ever took, I underestimated my opponent,” Ross admitted. “I knew I had him beat in every area of fighting, so I didn’t train one day. I just kind of hung around, because my last fight I won without training, and I thought I could do it again. I lost that fight.

“The second loss, I actually trained hard for that. I was fighting an undefeated fighter and my former training partner, Kuba [Kaszuba], and that night, he was the bigger man. I lost that fight, but I was coming in with a winning mentality. I just keep coming forward.”

Ross bounced back quickly with his most recent knockout win over Damon Minor in May at Island Fights 56, which served as his promotional debut. Minor had the better record, but Ross came in and scored a lightning-fast nine-second knockout by knee. This set him up for his second fight with the promotion, which takes place on Thursday night at Island Fights 60 in Columbus, Ga. Ross faces Jacob Kilburn in the main event.

“I saw he got a good knockout that went viral,” Ross said. “It was a highly ranked opponent — a guy who had 30 fights, I believe. Kilburn — I guess he’s a good opponent. That’s all I know about Kilburn. He got a good knockout, and it’s on UFC Fight Pass, and stuff like that.”

Ross spent a couple weeks of his camp at Smiley Academy in Orange Park, Fla., getting some different looks. As always, there is one thing fans can always count on from the rogue warrior.

“Violence,” Ross said. “I just want to put on a show for the fans. I don’t want to put on a boring performance. I’m just eager to win, and winning is all that matters to me — more than the fans telling me they like what they see. I just want to be violent, very action-packed, and very fan-favorite. It’s kill or be killed. I’m willing to get knocked out to knock him out.

Ross only has one thing on his mind: winning fights. He had a lot of pressure put on him while growing up, and it’s that pressure that has made him successful. With a girlfriend and a baby boy due in February, he just wants to make a career for himself in this sport.

“I just want to make it to a big show and get paid good,” Ross said. “That’s pretty much the whole goal. I want to get paid good money to do what I love to do.”