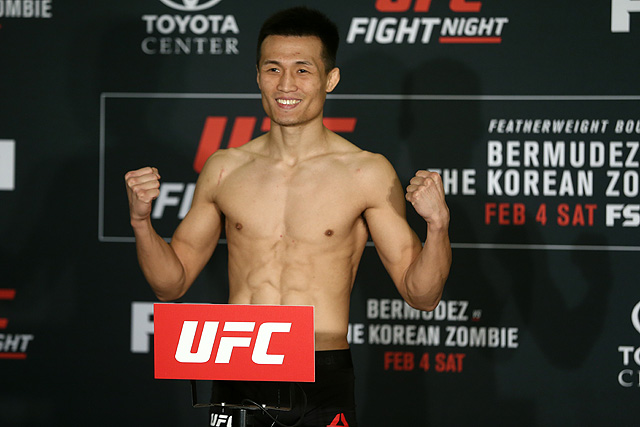 Can ‘The Korean Zombie’ Make One Last Title Run?

Saturday’s UFC Fight Night card features “The Korean Zombie” Chan Sung Jung against the rising Dan Ige. Jung recently surprised many fans by speaking about a possible retirement in the near future. While speaking to South Korean media, he declared that he would step away from the sport if he felt he was taking too much damage.

With this being said, can Jung work his way back to title contention before he hangs up the gloves?

Heading into his last fight with Brian Ortega, Jung appeared to be in prime position to capture the top-contender spot at 145 pounds. He had put together an impressive resume since he returned from mandatory military service in South Korea. The 34-year-old had won three of his four fights, including first-round demolitions of Renato Moicano and former UFC lightweight champ and featherweight title contender Frankie Edgar. Ortega had not fought in nearly two years, and there were questions regarding his ability to compete with the best after he suffered a brutal four-round beatdown at the hands of then-champion Max Holloway.

Jung’s bout with Ortega was first due to take place in December 2019 in the Zombie’s homeland, but “T-City” pulled out due to a knee injury and was replaced by Edgar. The two men did eventually meet in October 2020 on Fight Island in Abu Dhabi. UFC President Dana White stated beforehand that the winner would challenge Alexander Volkanovski for the belt.

Ortega came out with a different stance and a drastically changed game plan from what he had previously demonstrated prior to his two-year layoff. This seemed to catch Jung, who was waiting to throw his offense and was repeatedly beaten to the punch, by surprise. In the second round, Jung got caught with a spinning elbow and was dropped. He was able to recover, but his sporadic attacks became even more infrequent from this point.

Ortega’s constant stance switches, feints, variety of attacks, and in-and-out movement appeared to befuddle Jung, who could not get a read on his opponent. When Jung did make an effort to close the distance, he was labored and unable to land with his signature power punches. Ortega delivered a masterclass and prevailed with a 50-45 score on all three judges’ scorecards.

It was an uncharacteristically timid performance from the man who had earned a cult following for his propensity to be involved in chaotic, high-octane bouts. Jung later revealed on social media that the spinning elbow he received had given him a concussion and that he had no memory of the contest from then on. He admirably continued fighting for a further three rounds, but he did little to try to change the momentum of the contest. Such a serious concussive blow looks to have caused Korean Zombie to question his own longevity in MMA.

Jung’s discussion of retirement was a surprise. He is still one of the best featherweights in the world. He is in his athletic prime at age 34 and does not have a lot of miles on the clock relative to most fighters of his age. Since he returned from military service, he has only fought five times in four years. Of the current crop of elite featherweights, Jung has only competed against Ortega and Yair Rodriguez. There are several fresh match-ups for him in the division and opportunities to climb back into title contention. He has a well-rounded skill set, and his durability allows him to stay in fights even when he is out-matched. This makes Jung one of the most dangerous fighters at his weight.

However, it should be remembered that Jung gained his nickname due to his ability to take a great deal of damage and continue pressing forward. His fight with Leonard Garcia in the WEC and the contest with the aforementioned Rodriguez in the UFC were reflective of his approach. It has brought him great success, but it has clearly taken a greater physical toll than what is visible to outsiders and may ultimately shorten his career.

This weekend, Ige will present a unique challenge for Jung, in the sense that he is one of the few athletes in the upper echelon of the division who could legitimately claim to be more durable than the Zombie. Ige has never been knocked down in his nine appearances in the Octagon, but Jung can take confidence from knowing that the Hawaiian did come up short the last time he faced a step up in competition in Calvin Kattar.

Jung’s usual heavy-handed approach may not be as effective in this contest as it has been previously. He will likely need to implement a more technical game plan and make use of his height advantage. He might also consider taking Ige down, an element of the game that he has stepped away from in his last few bouts. The South Korean’s punching power has helped him secure his recent victories, whilst Ortega’s jiu-jitsu prowess would have deterred him from attempting takedowns in that particular contest.

Ige enters this fight with confidence after he achieved the most impressive victory of his UFC tenure in his last outing when he knocked out Gavin Tucker in just 22 seconds. Jung will need to be acutely aware that even a slight drop in motivation will likely result in a negative outcome. Ige has been seeking a top-five opponent for some time as he seeks to further his own title aspirations. Due to the lack of activity at the top of the weight class, Jung could find himself back in title contention with just two more wins, despite losses in two of his last four appearances.

The fact that Jung has talked about retirement could trigger a sense of urgency within him to try to make a title push. Conversely, it could be indicative of a lack of desire to compete in the sport and therefore spell danger for his title hopes. In the past year, many experienced UFC fighters have succumbed to young prospects, who have elevated their profiles at the expense of their older foes. With the prominence of this type of matchmaking, the Octagon has become an increasingly unforgiving arena for those who no longer have the mental and physical capacity to compete at the highest level.

The Korean Zombie will have to ensure that he is not the latest veteran to display mental fatigue if he is to avoid becoming the biggest win of Ige’s career. If he shows up with renewed vigor and purpose, then it will send a statement to the rest of the division of his ability to overcome a significant mental hurdle. Failure to do so is likely to move him one step closer to retirement.