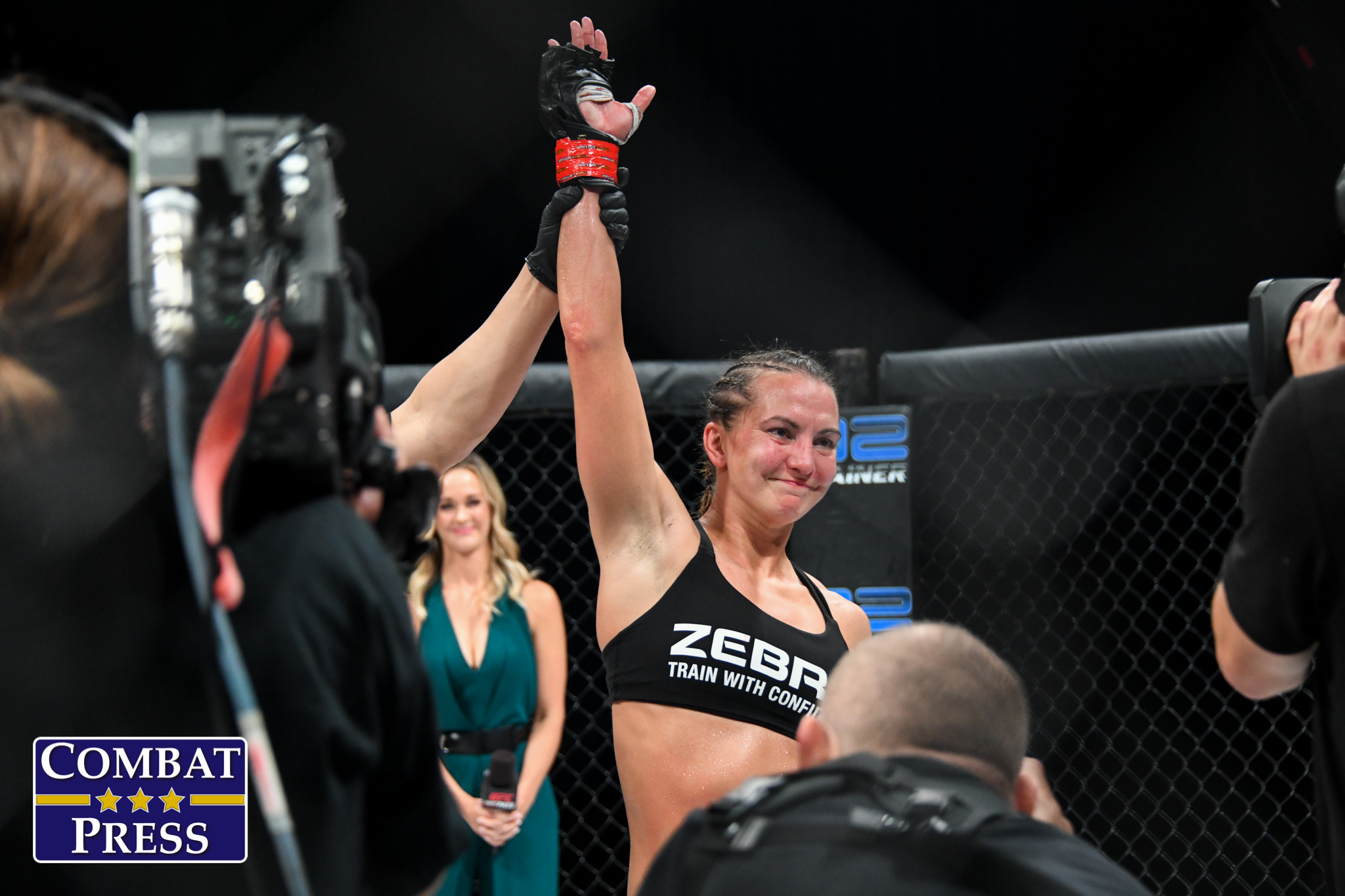 The fight game can come with a lot of ups and downs. Almost like a drug addict who is always chasing the ups, the downs can be really low, but that is all part of the journey.

Kaitlin Young has had her share of ups and downs throughout her fighting life. The amateur kickboxing champion opened her pro MMA career with four knockouts in a row. Her next four fights ended in stoppage losses. At only 24 years old, she was 4-4 as a pro, and was front and center with the roller coaster ride of the fighting life.

Shortly after her 25th birthday, Young got back in the win column, ended up 3-1 in her next four fights, and went to a split draw in the inaugural Invicta FC card against a very tough Leslie Smith. However, another skid came when she dropped the next four and put her career on hold.

During her long layoff, Young was still training and staying close to the fight game, spending time as a matchmaker for Invicta. However, four years later, she got back in the cage with a win over Reina Miura in Rizin, before knocking out two in a row in Invicta. This is not a story of ups and downs, but a story of perseverance. What is a person’s motivation to stay at this after so many ups and downs?

“It’s changed over the years.” Young told Combat Press. “Now, the most accurate way I can describe it is a desire to make things happen the way I believe I can.”

Young has always had the belief that she belongs with the best fighters in the world, but those setbacks can wear on a person. She got back in the cage and put together some impressive wins. He last one over Faith McMah at Invicta 35 just two months ago almost went the distance, until Young put the stamp on that one with just over a minute left.

“There were a lot of things that weren’t ideal about the timing of that fight, but my coach insisted that we could still get it done,” Young said. “We took the fight and made the most of it. The biggest takeaway for me was to trust my experience and his judgement.”

Young’s experience and her coach’s guidance has led her now to a 20-fight career, a winning record, and a chance to earn the vacant Invicta FC featherweight title tomorrow night, live on UFC Fight Pass. Only two months after her last win, she will be back for gold, but the set-up with this one is not totally ideal either. She will be facing longtime friend Pam Sorenson, who has also trained out of the Minnesota Martial Arts Academy, Young’s home gym. The build-up is sort of bittersweet.

“Pam and I had already discussed the possibility eventually, but I didn’t expect the fight to come so soon,” Young admitted. “The only thing that would’ve made it better would have been being in Minnesota.”

Compared to Young’s extensive striking background, Sorenson may appear to be more of a grappler, but both women can scrap. She has wins over UFC flyweights Nicco Montano and Jessica-Rose Clark, and most of her career has been under the King of the Cage and Invicta FC banners. Sorenson’s last fight was a fourth-round submission loss to Felicia Spencer, also for the same vacant belt, but Spencer went on to submit Megan Anderson in her UFC debut, which put Sorenson right back in line.

While Young is fighting a friend, but she is really looking to keep winning. With a new lease on her fighting life, a win would not only earn her the Invicta title but get her back to a winning streak she hasn’t seen in over a decade. Another big bonus is that Invicta champs get very close looks from the UFC, especially as the promotion is needing to grow it’s featherweight division. Young’s goal is simple.

“Right now I am solely focused on taking the Invicta title,” Young said. “After that, my main goal is to stay active.”

With many promotions having Muay Thai fights on mixed cards, and Lion Fight growing its own Muay Thai brand, there are a lot more options than there used to be for someone with a striking background to stay active. Young is open to those possibilities as well.

“Muay Thai will always be my first love,” said the former Muay Thai champ. “I am definitely open to future bouts. Obviously, there are some major differences, so I’d like a bit of time to specialize beforehand, but I’m down!”

In the meantime, Young is focused on the matter at hand, which is beating a familiar face for the Invicta FC featherweight title. And, fans will definitely not want to miss this one, as it comes with all kinds of twists and turns.

“I’m fun to watch and my corner wears Zubaz,” Young joked. “On a serious note, there will be something for everyone. Like pure violence? Plenty of that. Been around the block a bit and prefer watching for strategy? You’ll see that, too. Like the drama of a couple of friends fighting? You’re in the right spot.”

Young has definitely experienced the ups and downs of the fight game, and while her motivations may have shifted a bit in the last 10 years, her belief in herself and her will to win are as strong as ever. Tomorrow night, she has a chance to hit a big up in her fighting career.

Young would like to thank Kronphet Phetrachapat, Levi Cope, Lookchang Sitchang, Jay and Jamie Johnson, and the rest of the Redwood Muay Thai family. She would also like to thank Bill and Sharon Johnson, and her sponsors: Zebra Athletics, Menacing Valor, and BLNCD Naturals. Follow Kaitlin on Twitter: @kaitlin_young and Instragram: @kaitlinyoungify
Advertisement