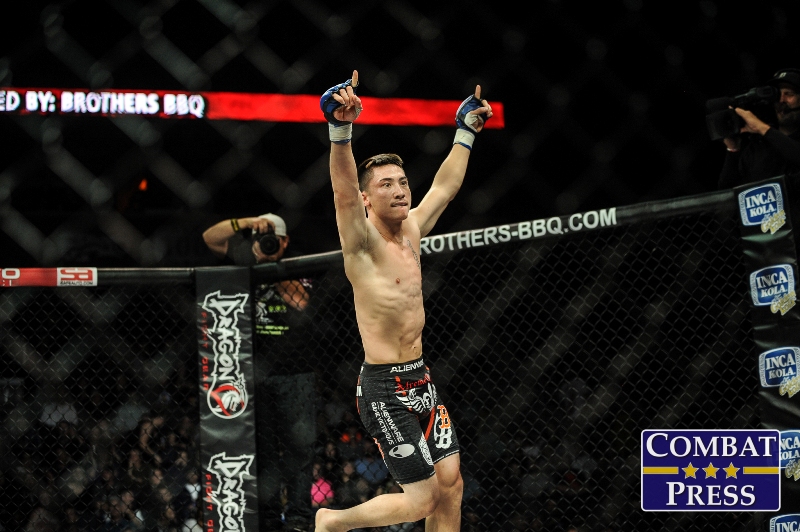 He was born and raised in Hawaii. He’s a former Olympic boxing hopeful who now trains at Xtreme Couture in Las Vegas. So, how is it that Boston “Boom Boom” Salmon has only fought in Broomfield, Colo., for almost two straight years? That’s three of his four professional fights.

Salmon has no other ties to Colorado than the simple fact that the Resurrection Fighting Alliance keeps getting him match-ups at one of its most frequented venues, the 1stBank Center. Two of the three fights were against locals, and during the last one, when Salmon fought Grudge Training Center’s Danny Mainus at RFA 26 in June, there were more Salmon fans than ever before. He has become a bit of a cult favorite in the area.

Salmon went on to beat Mainus by unanimous decision after three rounds, bringing his pro record to 4-0. It was his first decision since his first amateur fight, so he was happy to test his cardio.

“I felt good,” Salmon told Combat Press. “It was a good win on my resume. You know, a guy like Danny Mainus, he’s a good collegiate wrestler, so it was a good test for me. A lot of people look at me as a striker and stuff, and I showed that I’ve got a lot more than that. I’m a complete mixed martial artist.

“That was the first fight that went all three rounds. The fact that I was in Denver, at a high elevation — I felt perfectly fine. I could’ve gone two more rounds, if it ever came down to that.”

Salmon brought his streak to four and was scheduled for his next fight at RFA 31 in October in his current hometown of Las Vegas. However, prior to the event, he suffered a slight MCL tear and had to sit that one out. After a lot of rehab to strengthen the surrounding muscles, he got back to training. Now, he is set to fight at RFA 33 on Friday night. This one is slated for The Hangar in Costa Mesa, Calif., so his cult followers in Colorado will have to watch live on AXS TV.

“I’m kind of bummed we’re not going back out to Broomfield,” Salmon said. “I love fighting out there and I want to get back there again.

“Costa Mesa is close to Las Vegas, so there will be a lot of locals and a lot of support from Hawaii. I will have a lot of fans from Las Vegas and California. It’s only a four-hour drive from Las Vegas.”

Promotional newcomer Keith Carson will be Salmon’s opponent. Carson trains out of Millennia MMA in Rancho Cucamonga, Calif., and is on a four-fight winning streak as well, with all four wins coming under the Gladiator Challenge banner.

“I don’t really know much about him,” admitted Salmon. “I looked him up, and my management sent me over his information. I know he’s 6-2 with a lot of knockouts, so I’m sure he’s going to want to stand. If that doesn’t happen, he’s probably going to take me down. I saw one video, but it was a fast knockout, so I haven’t seen much.”

Salmon is correct. Of Carson’s six wins, two have been submissions, but four have been knockouts, which poses a very interesting proposition, since Salmon is a high-level boxer with amazing striking.

However, the fight with Mainus was a testament to Salmon’s ability to deal with grapplers as well, and he will be coming in with a height and reach advantage over the younger Carson. With a lifetime of boxing matches under his belt, he also holds a major experience advantage. Regardless of where Carson wants to take the fight, the native Hawaiian will be ready to scrap.

“I always prepare for a knockout,” said Salmon. “That’s the only thing I look for — to finish the fight. I always train hard. I train every aspect of the sport and I feel that I’m a complete fighter. If it goes to the ground, you will see my game there, and if it stays standing, you will see my improvements there as well.”

Xtreme Couture has been great for Salmon. After a bit of a lull this fall, the gym has started to pick back up, with a lot of the UFC guys coming in for what is shaping up to be a very busy nine days with four UFC events on the docket, three of which are in Las Vegas this weekend.

For now, Colorado will have to wait for the return of Salmon. The fans in Costa Mesa have no idea how lucky they are.

Salmon would like to thank all of his teammates and coaches, including Dennis Davis, Robert Follis and Nate Pettit. He would also like to thank his family, friends, management team at Sucker Punch Entertainment and his sponsors: Xtreme Couture, Viktorious Clothing, Farmer’s Market Hawaii, Alienware and Hayabusa. Follow Boston on Twitter: @BostonSalmon
Advertisement