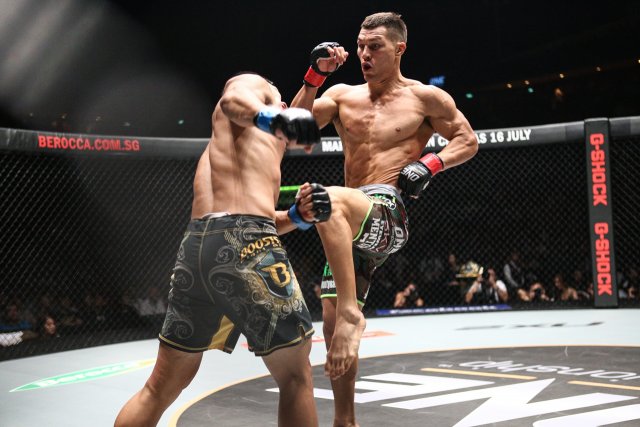 ONE Championship: ‘Kingdom of Khmer’ Preview and Predictions

ONE Championship returns to the Koch Pich Theatre in Phnom Penh, Cambodia, on Dec. 5 for ONE Championship: Kingdom of Khmer. The promotion’s inaugural trip to Cambodia featured former ONE flyweight champion Adriano Moraes defending his title. While there will be no title fights on this trip, there will be a battle of young lightweight prospects headlining the 10-fight card.

The main event of the evening features the return of Hawaiian-born prospect Lowen Tynanes. The undefeated Tynanes will welcome 24-year-old Russian prospect Rasul Yakhyaev to the circular cage. Tynanes has impressed since joining the promotion in 2013 following a bloody beatdown of popular ONE Championship lightweight Eduard Folayang in his opponent’s home country. With three impressive wins in the promotion already, Tynanes will be looking for another victory in his hopes to capture the ONE lightweight championship from the current titleholder Shinya Aoki. Yakhyaev looks to play the role of spoiler and follow the path of fellow Russian fighters Marat Gafurov and Vitaly Bigdash on his way to ONE Championship gold.

In the evening’s co-main event, two members of the famed Phuket Top Team gym in Thailand will clash in an attempt to move up the flyweight rankings. Anatpong “Mak Mak” Bunrad was scheduled to take on Japanese brawler Asuka “Riku Shibuya” Mikami before Mikami pulled out of the fight due to an injury. With just a week before the event, Bunrad is now slated to face top Malaysian prospect Gianni Subba. While the loss of Mikami was unexpected, the addition of Subba is a welcome sight. Subba has proven to be an exciting fighter with fight-finishing abilities.

In a rematch from the Cambodian Featherweight Grand Prix at ONE Championship: Rise of the Kingdom, the first ONE event in Cambodia, Chan Rothana will seek to redeem himself after being disqualified in the finals. As Rothana barely missed a right soccer kick attempt, he spun and came down with the heel of his left foot in a stomping motion. The referee halted the bout after Rothana’s follow-up punch, but ONE officials decided that the move was illegal and Sam Ang Dun was unable to continue. The rematch will be popular among the Cambodian fans, as both men have a long history of fighting in the country.

Hometown favorite Chan Heng returns to the ONE Championship cage against Indonesian prospect Mario Satya Wirawan. Wirawan lost his last bout at ONE Championship: Odyssey of Champions in September, but he was on a three-fight winning streak prior to the decision loss to Su Noto. Heng will ride the momentum of his most recent win over Detchadin Srosirisuphathin at Full Metal Dojo 4 in February in hopes of starting another long winning streak. Both men will be looking for their first win inside the promotion.

Unbeaten Cambodian prospect Meas Meu will scrap with 23-year-old prospect Chan Sam Art. While unknown in the western hemisphere, Art is a Kun Khmer boxer with a wealth of mixed martial arts experience, having fought and won over 20 times. The 25-year-old Meu will look to use his grappling against the experienced striker in what should be an exciting match-up of native fighters.

To round out the main card, young Cambodian flyweights Khon Sichan and Sim Bunsrun fight in a rematch of their June 2013 bout. Sichan is a popular Khmer boxer who has made the switch to MMA. Both men have won titles in the largest Cambodian MMA promotion, the Khmer Warrior Championship. In their first meeting, Sichan finished Bunsrun in the first round with a modified choke from the back mount.

The fight card will begin at 7 a.m. ET. It will be posted on the promotion’s YouTube page shortly after its completion.

The 25-year-old prospect Lowen Tynanes burst onto the Southeast Asian MMA scene with a bloody first-round win over URCC lightweight champion Eduard Folayang. The victory earned Tynanes a spot with ONE Championship in 2013. He wasn’t given an easy debut opponent, but he emerged with a last-second submission win over South African kickboxer Vuyisile Colossa. Tynanes sunk in the rear-naked choke with just 23 seconds left in the third and final frame. The impressive debut led to another fight with the promotion and another impressive win. Tynanes trapped the arms of Swiss fighter Felipe Enomoto in the crucifix position and rained down punches and elbows until the referee called a stop to the bout.

Tynanes has already impressed just five fights into his professional career. He earned finishes over top veteran competition and won the King of the Cage junior welterweight (160-pound) title. He was forced to stay dormant during a contract dispute with King of the Cage from mid 2013 to late 2014. Tynanes finished out his KOTC contract with a 71-second submission win over Jeff Sweeney in October 2014. With his contract finally out of the way, Tynanes was free to return to ONE Championship in 2015. He battled Ukrainian lightweight prospect Kuat Khamitov to a decision victory at ONE Championship: Warrior’s Quest in May.

Chechen prospect Rasul Yakhyaev will be making his ONE championship debut after another stoppage win in August. The first-round technical knockout finish of Ricardo da Silva marked the 24-year-old’s second straight win and sixth victory in his last seven bouts. The Russian fighter, who trains out of Fight Club Berkut, has made a name for himself as a fight finisher, stopping seven of his opponents in the first round.

Yakhyaev is an orthodox fighter with good, quick leg kicks and a strong right hand. The Russian is tough, as most are, and he uses that attribute to stay in the pocket and exchange with his opponents. Yakhyaev is a good grappler with a well-rounded set of skills on the mat. The key for Yakhyaev in this fight will be his speed. He will need to keep active and outwork the oft aggressive Tynanes.

This is a fight that could come down to the scrambles and activity. Yakhyaev tends to start slow despite his collection of early finishes. This is a trend he will have to kick in this fight. He will need to establish control of the center of the cage and mix his striking and grappling with a more aggressive approach. If he fails to meet the pace of Tynanes, he may be outworked and find himself on the wrong end of a decision. In a close affair, Tynanes will stay unbeaten after doing just a little bit more than his Russian foe in the three-round headliner.

Anatpong “Mak Mak” Bunrad is a 29-year-old fighter training out of Phuket Top Team. He made the move to Phuket in 2014 after spending much of his life living in Belgium. Bunrad began training in judo at the age of 10, but didn’t start competing until he began training in Shihaishinkai Karate, a martial art involving Kyokushin Karate, grappling and MMA techniques. The professional chef made his ONE Championship debut with a 26-second knockout of Mark Marcellinus in October 2014. The body shot and follow-up soccer kick was a brutal beginning to what is surely a promising career ahead of the Thai native. Bunrad last fought and won a back-and-forth split decision against Geje Eustaquio in April.

Gianni Subba is one of Malaysia’s most promising prospects. The 22-year-old flyweight made headlines in his ONE Championship debut with a devastating knockout over Bruce Loh in October 2012. The powerful counter left hook was followed by a destructive right-leg soccer kick that put an end to Loh’s night. Subba continued his winning ways with a second-round armbar submission of Saiful Merican just five months later. Another win was followed by Subba’s only career setback when he lost a decision to Eugene Toquero at ONE FC 15 in May 2014. Subba would get right back to his winning ways with three straight victories. Subba triangled Ruel Catalan, soccer-kicked Thanh Vu and, in his most recent outing, won a decision over Almiro Barros.

This is an explosive match-up of strikers who can grapple. Bunrad is a quick striker with a strong arsenal of kicks developed from his karate background. While he doesn’t have the traditional Muay Thai background of most Thai fighters, his training with Phuket Top Team has continued to develop his striking further. Subba is an explosive fighter who picks his shots and always works to finish fights.

Bunrad will likely look to keep this fight on the feet, while Subba is going to look to close the distance and land his strikes before eventually attempting to drag the fight down. Don’t be surprised if we see a finish from either man, whether it be by strikes or a submission on the mat. After three hard-fought rounds, Bunrad will have his hands raised in a very close fight.

Chan Rothana is a 29-year-old Khmer boxer who made the move to Tiger Muay Thai in Thailand. Rothana has fought in Muay Thai and Kun Khmer over the past years, racking up an impressive 80 wins along the way. He has fought at the highest stage in Cambodia, experience that will surely help him against the surging Cambodian prospect Sam Ang Dun. Rothana last fought at ONE Championship: Age of Champions, where he stopped Ramon Gonzales with elbows in the first frame.

Dun is a 22-year-old prospect fighting out of A-Fighter in Cambodia. He has a wealth of experience in both MMA and Kun Khmer despite his young age. He defeated Chin Heng in his ONE Championship debut in the semifinals of the tournament at ONE FC 20. While he was the man with his hand raised after the conclusion of his last bout with Rothana, Dun was in trouble when the fight was stopped.

The rematch of the inaugural Cambodian Featherweight Grand Prix will be highly anticipated by the crowd in Phnom Penh. Both men have grown through their competition in MMA and Khmer boxing bouts since their first meeting. If he wishes to come out on top, Rothana will need to take advantage of his striking experience and avoid the grappling of Dun. Dun will have paths to victory, but he had trouble finishing his submission attempts against his larger opponent.

Rothana will get the better of Dun after a back-and-forth fight.