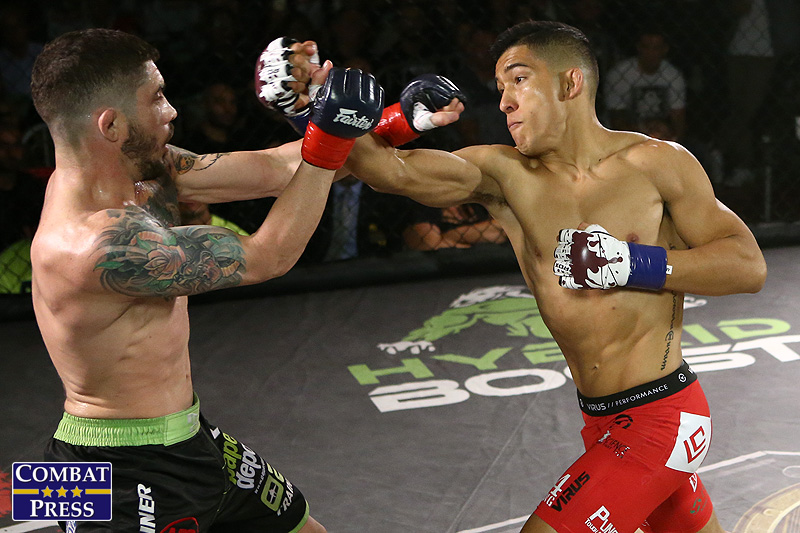 LFA 62’s Vince Cachero: ‘A Dream to Fight Someone Like This’

Nobody likes to have the rug pulled out from under them. A lot of build-up and even bigger disappointment is never really the best-case scenario.

Vince “The Anomaly” Cachero has had a relatively meteoric rise in MMA in a short period of time. He turned pro only two years ago after going 4-1 as an amateur, but he has already racked up a 6-0 record and put himself in position as a legitimate Legacy Fighting Alliance title contender.

In November, Cachero faced a more experienced Joe Murphy on the main card of LFA 54. Cachero was expecting a finish, but instead put on a dominant performance that prompted the judges to rule in his favor.

“I had Joe ready to go in the second round, and he came back hard in the third,” Cachero told Combat Press. “It was just keeping him in my rhythm and keeping that going strong in the third round, and I think I would have been able to finish him. But, you know, some slight adjustments here and there. Joe was backing off more than I thought he would, and he was just trying to counter a bunch. So, it made it a little more physical for me to get in my rhythm the whole time.

“When I was there, I was putting it on him, and I felt like if you were there and you saw the fight without hearing anything else, I definitely absorbed way more damage, and I was walking toward him the whole time.”

The win was Cachero’s third in a row with the promotion. It was enough to earn him a bantamweight title shot against incumbent champ Miles Johns. The fight was announced in February, but Johns later pulled out of the fight. This led to an interim title contest between Cachero and current LFA interim flyweight champ Casey Kenney. They clash on Friday night in the headliner of LFA 62 at The Bomb Factory in Dallas.

“As soon as they gave me a name, I said, ‘Hell yeah, let’s do it!’” Cachero said. “After watching more of his tape and stuff, I was more excited, because, one, the dude is obviously experienced — he’s been in the [Dana White’s Tuesday Night] Contender Series twice, so they obviously really like him. He didn’t get signed from those fights, but he’s aggressive. I love that. I love seeing that. Any time a guy is willing to be in there and get aggressive with me, it’s exactly what I want. I’m going to walk into the center of the cage, he’s going to walk into the center of the cage, and we’re going to throw down. I’m just happy that they got the perfect replacement, because there aren’t many guys in my division right now, especially in LFA, who are willing to stand there and trade with me.”

The Hawaiian-born California resident is known for wanting to take tough fights, and he would love a chance to fight the best guy in his division. The champ may be out, but Kenney, another champ, is the next best thing.

“He’s got more experience, and he’s good everywhere,” Cachero said. “He’s got good hands, good striking, and good grappling as well. I think the experience factor and being in front of [UFC President] Dana White, being on the Contender Series, and already having a belt as well, I think he’s a tough test for me, for sure.”

With Johns out, a lesser man might walk around with the interim belt as if he were the undisputed champ. Fans have seen way too much of that recently, especially in the UFC. However, Cachero is a level-headed fighter who wants to earn the title in a truly undisputed manner. He will be happy to take the belt on Friday and unify it later.

“I’m not one of those guys like [Kelvin] Gastelum that’s going to be walking around with that other belt,” Cachero explained. “You know, Miles Johns has the belt — I 100 percent believe I was going to take it from him on March 22 — and, even when I win the interim belt in this fight with Casey Kenney, I still feel like I’m going to be a champion. But by legalities and stuff, Miles is the champ. I’m going to be the LFA champ with the asterisk, and I’m fine with that.”

Cachero has plans to get married after the fight, take a honeymoon trip to Barcelona and then come back to a fight announcement. He has business to attend to first, though. Kenney has, indeed, fought on the Contender Series twice. One was a win and the other a loss. However, that was his only pro loss, and it was a split decision. Kenney has never been finished. His 10 wins have been evenly split between stoppages and decisions. Even though he has been fighting at 125 pounds, he will actually have a very slight height and reach advantage over Cachero. Yet, this actually builds on Cachero’s motivation.

“Check out my highlight reel online,” said Cachero. “I’m aggressive. I’m going to make this fight violent, and so is Casey Kenney. He’s aggressive, he’s violent, and this is going to be a hell of a fight. This has ‘Fight of the Night’ written all over it. It’s going to be a war. To me, it’s a dream to fight someone like this.”

Cachero’s train just keeps on rolling with no plans to slow down. He was confident he was going to beat Johns, and he’s confident he will beat Kenney. The rug got yanked, but immediately replaced with arguably a better rug. It’s tough to bet against a guy who has no blemishes on his record. On Friday night, on a card that airs live on AXS TV, fans are in for a great main event.

Cachero would like to thank his coaches and teammates at A4 Boxing, Black House, and Fight Science MMA. He would also like to thank his family, friends, fans and sponsors: The Boiling Crab Hawaii, FightTips, Luta Gear, Punch Gunk, and Born Tough. Follow Vince on Twitter: @VinceTheAnomaly
Advertisement