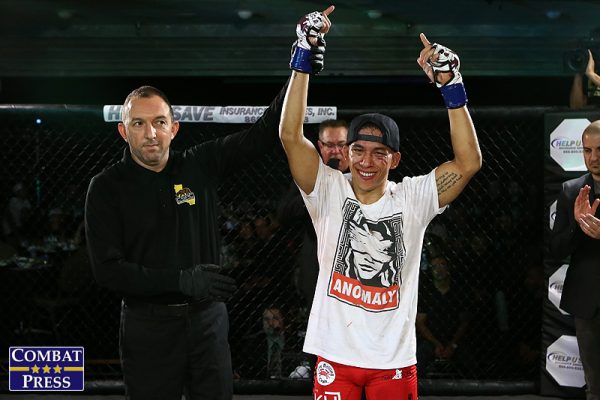 LFA 54’s Vince Cachero: The Path of Most Resistance

If you always take the easy route, how do you really expect to get good at something? Too often in combat sports, fighters take the path of least resistance. It always looks great to say you are 5-0, but if the combined record of your opponents was 1-24, what meaning does that really carry?

Vince Cachero, who was born in Hawaii and now resides in California, is undefeated through five fights in his 21-month pro career. However, his opponents carry a combined record of 20-5. Needless to say, he hasn’t been padding his resume.

“It was another win against a tough opponent,” Cachero told Combat Press. “He’s from that Cub and T.J. Dillashaw hybrid camp that everyone’s all hyped about. I basically went out there and dominated the fight from start to finish. It’s just another win [where] I’m proving to the UFC that I’m dominating these guys.”

Cachero won by rear-naked choke in round two. It’s the second time he has done that in just over a year. It only helps that the win came over a guy who trains at such a high-level camp that features Dillashaw, who holds the UFC bantamweight title. That belt is the ultimate goal for Cachero.

“I’m always looking to make improvements, and my eyes are always on T.J. Dillashaw, or whoever the champion is at the time,” Cachero explained. “I’m looking to what skill set I can improve to fight that guy and beat that guy. As for my fight in particular, there are things that we noticed, but it was as close as I’ve come to a flawless victory. I’m just looking forward to improving everywhere and showcasing it moving forward.”

Cachero’s next fight takes place on Friday night at LFA 54. He’s set to face Joe Murphy in a main-card affair. It will be the first time the two men have tangled inside the cage, but they are very familiar with each other.

“Murphy’s a tough dude,” admitted Cachero. “He was one of the top prospects in [the Resurrection Fighting Alliance] at one time. I’m excited for the fight. I know he’s very talented — a black belt. He knocked out Bruno Frazatto, I believe. I’m just excited to fight another talented opponent and prove that I’m not taking easy fights. Maybe Joe hasn’t had a fight for a while, but he was an O.G. prospect for a reason. He’s got talent and he’s got skills.

“He actually fought two of my friends. Terrion Ware sent him off on his losing streak — and Terrion’s my boy; [Ware]’s my main training partner, and we beat each other up all the time — and he also lost to Vinny [Zani]. Vinny trains at Black House, too. So, I’m familiar with Joe, and I know his tendencies and things like that.

“He did take a few years off, so I’m expecting a completely different Joe Murphy. I’m not expecting him to come out with the same game plan as before.”

Murphy’s loss to Zani was two years ago, and he has not fought since. He is on a three-fight skid, largely courtesy of Cachero’s aforementioned teammates. There is a lot on the line in Murphy’s return.

“I’m not taking easy fights,” said the Black House MMA standout. “I’m trying to fight the toughest guys I can. The last three guys I fought are killers. It’s in my mindset. I’m in this not just to make it to the UFC, but to go there and dominate. So, I’m putting in the work. If I get the call up to the UFC after this fight, my training camp’s not really going to change. I’m already putting in the work, and I’m already putting in all the effort that I can into this.

Cachero would like to thank all of his coaches and training partners at Black House, A4 Boxing and Fight Science MMA. He would also like to thank his family, friends, fans and sponsors: The Boiling Crab Hawaii, Luta Gear, Punch Gunk, FightTips and Paradise Soccer Club. Follow Vince on Twitter: @VinceTheAnomaly
Advertisement