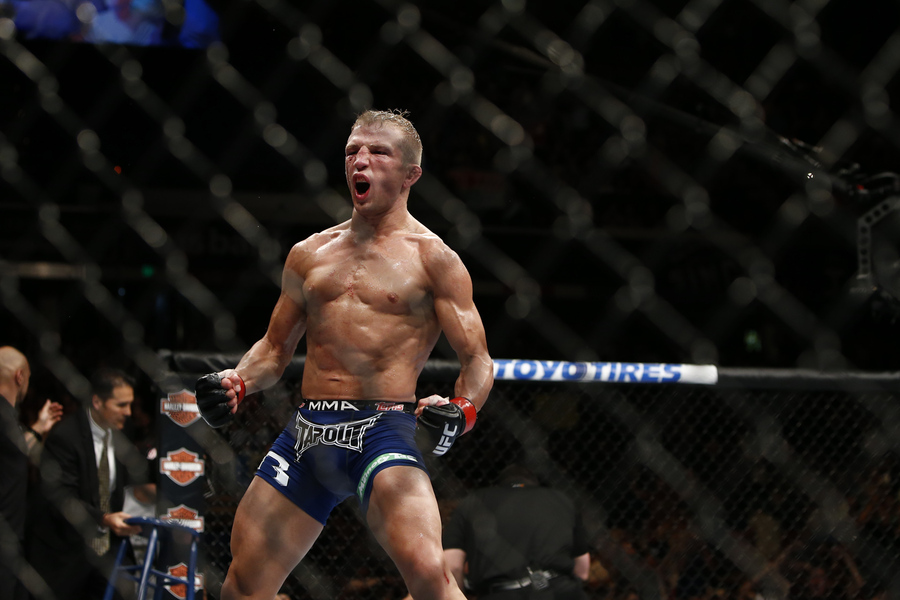 Until T.J. Dillashaw shocked the world and beat the stuffing out of Renan Barao in order to win the UFC’s bantamweight belt earlier this year, Team Alpha Male had the unenviable reputation as the fight camp that couldn’t win the big one. From Urijah Faber to Chad Mendes to Joseph Benavidez, the elite fighters out of Team Alpha Male consistently reached the top of the mountain and earned an elusive UFC title fight. And over and over again, the best that Sacramento’s MMA scene had to offer fell to a dominant champion.

Some fans jokingly said the gym was cursed. Others whispered that perhaps the popular gym just wasn’t able to get their fighters to the level they needed to reach in order to take home a belt. Regardless, after Faber, the leader and face of the gym, failed in his third attempt to win UFC gold this past February—the sixth failed attempt for the team overall—fan expectations hit a new low concerning the popular fight camp. Then Dillashaw worked his magic against Barao, and suddenly the criticisms lingering around the camp didn’t just quiet, they pretty much disappeared completely.

Faber was the proverbial face of the WEC and the lower weight classes in general prior to the WEC being absorbed by the UFC. Following the merger, “The California Kid” and his already well-known teammates Mendes and Benavidez were pushed as top contender in their respective divisions. When immediate success didn’t follow, their reputations and the reputation of the team as a whole took a bit of a hit. In hindsight, though, the level of performance shown by these stars from the time of their UFC debuts to the point when Dillashaw won the belt is remarkable. It’s almost laughable that many fans started to turn on the camp as quickly as they did. After all, it wasn’t like Faber and company were dropping fights against lackluster competition. They were putting on mostly competitive bouts against some of the best fighters in the world.

The gold belt around Dillashaw’s waist is proof that Team Alpha Male is home to one of the best fighters in the world, but it doesn’t exactly take a ton of research to realize that the Sacramento gym is likely the most talented camp in the world right now. They may only have one champion, but the stranglehold they have on the top contender’s spot in nearly every weight class south of 155 pounds is a display of dominance that hasn’t been seen since maybe Pat Miletich’s team dominated the early 2000s. Considering how much the sport has grown since then, this variation of Team Alpha Male, even with only one world champion, may be the most talented fight camp in the history of the sport.

With Faber stuck firmly behind Dillashaw in the bantamweight title scene and Mendes and Benavidez trying to rebound from their second losses to their respective champions, it may be a while before another Alpha Male fighter gets a shot at UFC gold. Much like Rich Franklin dominated the rest of the middleweight division after getting dispatched from his throne by Anderson Silva in 2005, the Alpha Male members without gold are still widely considered the second or third best fighters in their divisions. And just as Franklin seemingly spent the next few years smashing every other name put in front of him that wasn’t Anderson Silva at 185 pounds, Faber and company could easily find themselves in the same precarious situation. At this point, it could take winning streaks of five or more fights for any of these Alpha Male fighters to get back into the title mix, and the scary thing is that you’d be hard pressed to find more than a single guy in any of the divisions that would be considered a favorite heading into a fight with one of these former contenders.

There’s a reason Mendes didn’t fight a true top contender leading into his fight with featherweight kingpin Jose Aldo this summer. It’s the same reason Benavidez is ranked No. 2 in the world at flyweight but is getting lined up with opponents sitting well outside of the top five. The reason? They tend to beat whomever the UFC puts in front of them. That’s why the company will likely let Conor McGregor waltz into a title fight with a win this January instead of making him go through a top contender like Mendes, or why it’s highly unlikely that we’ll see John Dodson have to take out Benavidez in order to earn another shot at flyweight champ Demetrious Johnson.

In all honesty, after their multiple title-fight losses, all three of the Team Alpha Male mainstays have been turned into glorified gatekeepers. However, they guard that gate with such an iron fist that the UFC is hesitant to allow anyone noteworthy to attempt to pass.

Since stepping into the Octagon a few years ago, Faber, Mendes and Benavidez have been ranked near the very top of their respective divisions. Based on recent performances, that shouldn’t be expected to change soon. Mendes just pushed possibly the best pound-for-pound fighter in the world to the absolute limit just weeks ago, Benavidez just picked up his second straight win since falling short in his last title fight, and Faber has been in the sport a decade and has never lost a bout that didn’t have gold on the line. Despite the title-fight losses, the way that these fighters have dominated over the past few years is unprecedented for a single fight camp.

When you factor in the amount of in-house tension that could be created by fighters getting fed up and looking to change divisions, it’s almost more remarkable that so many top-tier fighters have been able to stick together for all this time. Benavidez or Mendes could easily decide they were tired of being stuck on the outside looking in as contenders and attempt to make a move to 135 pounds, but they refuse to do so with Dillashaw sitting on top of the mountain and Faber still prowling around in the top five.

The amount of talent and camaraderie that exists between the members of Team Alpha Male has turned a camp that was amongst the most criticized of the last few years into the most successful camp in MMA today. Even with just a single UFC belt in their trophy case and a record in title fights that is likely to remain a few shades below .500 unless Dillashaw can become the best bantamweight champion of all time, Team Alpha Male has proven that they deserve every bit of hype and praise that can be heaped upon them. They may focus on the smallest divisions out there, but pound-for-pound it’s tough to find another camp that can claim the same level of excellence shown by Team Alpha Male.