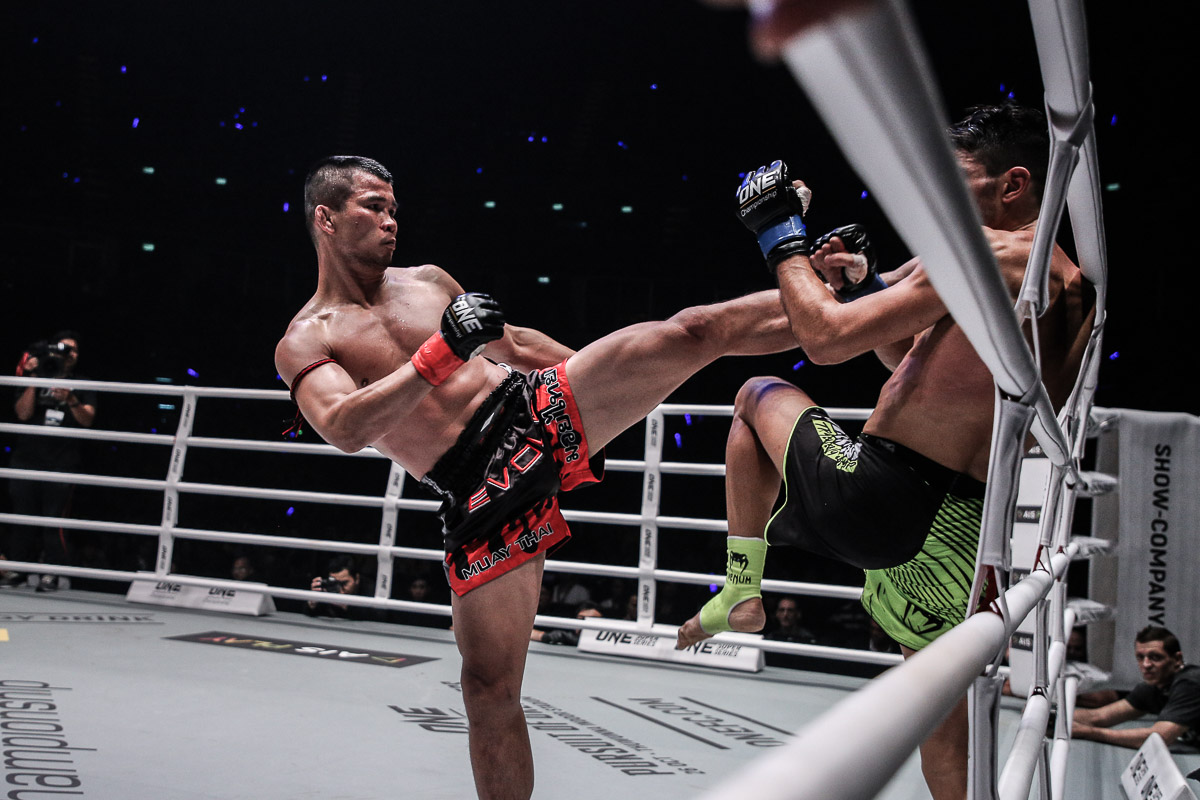 ONE Championship: Clash of Legends Preview and Predictions

ONE Championship is scheduled to crown its second ever Muay Thai champion on Saturday, Feb. 16, when the promotion returns to the Impact Arena in Bangkok, Thailand, for ONE Championship: Clash of Legends.

The ONE Super Series bantamweight world title is up for grabs between former Rajadamnern and Lumpinee stadium champion Nong-O Gaiyanghadao and rising Chinese prospect Han Zi Hao, who was the first fighter in the promotion’s history to reach three wins. Nong-O is slated to be one part in the inaugural championship bout after back-to-back victories over Frenchmen Fabio Pinca and Mehdi Zatout in his return.

Three-time Lumpinee stadium champion Kongsak P.K.Saenchaimuaythaigym is featured in the co-main event alongside exciting Russian prospect Alaverdi Ramazanov. The victor could put himself in prime position to fight the winner of the main event in the future.

In the preliminary-card headliner, former Rajadamnern and Lumpinee stadium champ Chamuaktong Fightermuaythaigym takes on one of the United Kingdom’s top fighters in Charlie Peters.

This card is heavy on Muay Thai fights, including the bantamweight championship headliner. Nong-O Gaiyanghadao and Han Zi Hao battle for the inaugural title. How do these two fighters compare, and which man will emerge as the superior fighter?

Nong-O has been one of the most consistent competitors on the Muay Thai scene for years. The two-time Sports Authority Of Thailand “Fighter of the Year,” Rajadamnern, and multiple-division Lumpinee stadium champion will be competing for another world title, this time with ONE. If Nong-O claims victory against his Chinese opponent, then he will become only the second Muay Thai Super Series champion — the first-ever champ was Sam-A Gaiyanghadao, who was also the first participant in a ONE Super Series bout. Nong-O not only holds a win over Sam-A, but he’s also defeated many of the best fighters in the world for over a decade leading to an incredible resume that features 257 victories.

Nong-O was able to showcase his skill level and experience against former top-10 kickboxer Fabio Pinca in his ONE Championship debut. Despite fighting for the first time in over three years, Nong-O was able to take down one of France’s best Muay Thai products. The 32-year-old continued his return with another decision victory over a Frenchman, this time against high-level competitor Mehdi Zatout. After two convincing wins, the Evolve gym member is ready for a test against sanda-turned-Muay-Thai fighter Zi Hao.

The 23-year-old Chinese prospect set forth on one of the best winning streaks in ONE history after defeating Greece’s Stergos Mikkios in his debut in September. Zi Hao knocked Mikkios down multiple times throughout the bout to claim the dominant decision victory. Zi Hao went on to dispatch of Ryan Jakiri and Azwan Che Wil, each inside of one round, to earn his place in this championship bout. The heavy-handed competitor moved his career totals to 60 wins in 75 fights. His signature victory came over former Lumpinee stadium champ Rafi Bohic.

This match-up could turn out to be interesting, considering the age gap, clear experience difference and spotlight on the contest. However, Nong-O is clearly the better fighter. Zi Hao’s power could play a factor in the contest, but Nong-O is likely to be crowned the inaugural bantamweight champion.

Which other Muay Thai specialists should fans keep an eye on at this event?

Kongsak P.K.Saenchaimuaythaigym will make his ONE Super Series debut with his sights set on the flyweight world title, which will be up for grabs in the main event between Zi Hao and Nong-O, whom Kongsak defeated in 2011. The former two-division Lumpinee stadium champion and winner of the 2010 Sports Writers of Thailand “Fighter of the Year” award makes his promotional debut after nearly two decades of experience. The 28-year-old holds 182 victories and only 39 defeats in his illustrious career, which features wins over Pornsanae, Pakorn, Yodwicha, Jomthong, Saeksan and many other top fighters.

Kongsak will be welcomed to the cage by 24-year-old prospect Alaverdi “Babyface Killer” Ramazanov. The Russian has accrued a solid resume throughout his time in Thailand. He has won three IFMA world championships and racked up a record of 59-4 in his professional campaign. The Venum Training Camp representative kicked off his ONE career by defeating two-time former Lumpinee champ Petchmorrakot Petchyindee Academy. He continued his impressive run with a first-round knockout of Andrew Miller, but fell short against another former world titleholder, Saemapetch Fairtex, in a short-notice bout. Expect some fireworks when these fighters get to work with the four-ounce gloves in Thailand.

Former two-time Lumpinee stadium champ Superlek Kiatmoo9 makes his promotional debut against Cambodia’s Lao Chetra. Superlek, 23, has competed against some of the best Muay Thai fighters of the past decade and holds victories over a who’s who of competitors in the major stadiums. Superlek has a slight advantage in overall experience over his 19-year-old opponent, but Chetra has managed to win the exact same number of fights — 120 — with three less fights total. This bout is intriguing due to the clash in styles between the Muay Thai stylist and Chetra’s Kun Khmer background, where he was able to capture the renowned Bayon stadium title.

Former two-division Lion Fight champion “Smokin’” Jo Nattawut returns for his fourth fight with the promotion. After dropping his debut against the second-ranked pound-for-pound fighter in the world, Nattawut has reeled off two impressive performances with a stoppage victory over Yohann Drai and a decision win over George Mann. Thailand’s Nattawut, 29, takes on Frenchman Samy “AK47” Sana. The 30-year-old had his 10-fight unbeaten streak halted in his promotion debut agaisnt Sorgraw Petchyindee. However, Sana returned to the win column with a solid performance against Armen Petrosyan. Both fighters are scheduled to compete in the upcoming ONE Super Series featherweight grand prix, so this bout has stakes beyond this event.

Former Lumpinee and Rajadamnern stadium champ Chamuaktong Fightermuaythai returns to the promotion following a successful debut against Dutch kickboxer Brown Pinas last year. The 30-year-old has racked up 145 wins in his 180-bout professional career, including victories over some of the top fighters in the sport. Training out of the famed PK Saenchai Muay Thai gym in Bangkok, Chamuaktong will be the favorite coming into this contest with one of England’s top fighters, Charlie Peters. The 29-year-old Brit will have his hands full in his promotional debut in this 67.5-kilogram catchweight contest. Peters has won nine of his last 11 fights, including wins over Liam Harrison, Azize Hlali and former Rajadamnern and Lumpinee stadium titleholder Pakorn. Peters will be the underdog heading into the bout, but his boxing and overall technical fighting ability should make this a competitive fight throughout.

What is the most important MMA fight in the lineup?

It’s pretty clear that the most important fight is the bantamweight clash between South Korea’s Dae Hwan Kim and Japan’s Shuya Kamikubo.

Kim, 32, is a former title challenger who has only lost three times in his career — in his title challenge against former champ Bibiano Fernandes, in a bout against UFC veteran Leandro Issa, and in a controversial disqualification after knocking out Daichi Takenaka with what was determined to be an illegal strike. Since the loss to Takenaka in early 2018, Kim has won back-to-back contests against former Deep and Cage Rage champion Masakazu Imanari and China’s Zhikang Zhao. Kim can compete wherever the fight goes, but he has racked up nearly twice as many submission victories as knockouts in his career with nine stoppages among his 14 career victories.

Kamikubo has picked up victories in his last five contests. This is the second longest streak in his career after winning three straight fights out of the gates. Kamikubo then won three fights in one night to capture the 2014 Deep Future King tournament. His victims were Akira Ogawa, Tomoya Omura and Isao Sakiyama. After falling short to Shooto, Deep and Pancrase veteran Jun Doi, Kamikubo picked up another three wins to earn his place with ONE. Since debuting, the 23-year-old has dominated both of his opponents, stopping the four-fight winning streak of Sunoto Peringkat and topping Muhammad Aiman for three rounds. Kamikubo will hunt for the submission if necessary, but he prefers to keep the fight on the feet.

This bantamweight contest will decide which fighter moves up the ladder in a division where the belt is scheduled to be contested in the coming months. This is the most important MMA outing on the card, but not by much. The bantamweight showdown between Kiwi prospect Mark Abelardo and undefeated Japanese fighter Daichi Takenaka will likely be just as significant and potentially even more exciting because of the clash of styles.