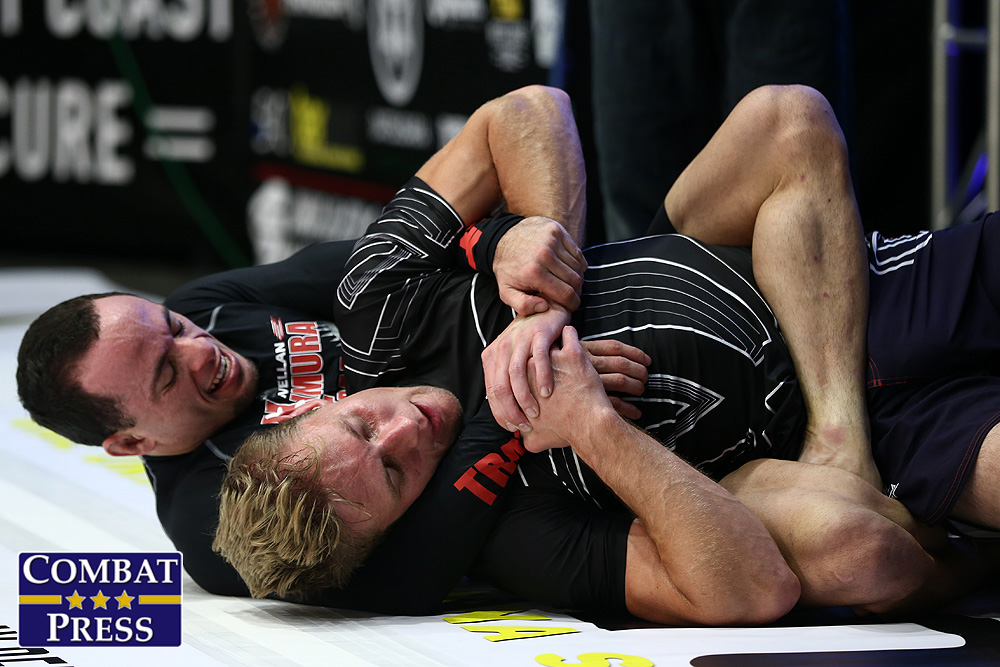 The English bulldog is a breed that is known for many traits. These canines are short and brawny, but they’re also loveable and dependable. While their snoring might bother some folks, others think it just adds to the breed’s loveable quality.

Jason Soares has been a bulldog lover for a long time. In fact, the little brutes have become a rather large part of his life.

“I wanted an English bulldog since I was 12 years old,” Soares told Combat Press. “Bulldogs just kind of have a different personality. They’re funny and persistent, and I like how they look. They are my dog of choice.

In addition to being an amateur breeder of bulldogs, Soares is a professional MMA fighter. He hasn’t loved fighting for as long as he’s loved his furry friends, but he’s definitely on a rapid ascent to the top of the fight game. He’s 11-0 as a pro, suffered an exhibition loss by majority decision in a bid to get onto the 22nd season of the UFC’s The Ultimate Fighter reality show, and has finished nine of his opponents.

His last outing was at Titan FC 49 in April 2018, when he secured the promotion’s featherweight title with a rear-naked choke of Luis Gomez.

“The fight didn’t go as planned,” Soares admitted. “I still came out with the win. It was good experience, and I went four rounds before I got the finish. Those fights are fun. I already felt like I can’t be put away, and I already had that kind of confidence coming into the fight. It was a good fight, and I have that comfortability coming into the cage.”

The only thing Soares has been loving longer than fighting is his family and his dogs. However, when he decided at a young age to be a fighter one day, he wasted no time becoming the best at it.

“I’ve liked MMA since I was a kid,” said Soares. “I saw it when Matt Hughes was a champ, and I loved Matt Hughes since seventh or eighth grade. I had the opportunity to wrestle when I went to high school, and I knew that wrestling was a big part [of MMA], so I started wrestling based on the fact that I wanted to fight. As soon as wrestling was over my senior year, I went online and found the closest gym that I thought was the best. I was living in the [Florida] Keys at the time. That’s where I was raised, and I would drive up to Miami every other day to train at the Freestyle Fighting Academy, I’ve been training there ever since.”

Freestyle Fighting Academy is Miami’s oldest MMA gym. With brothers and Brazilian Jiu-Jitsu black belts Marcos and David Avellan at the helm, Soares is fortunate enough to have top-notch training. Throw in his striking coach, Eric “El Tigre” Castanos, and there is a reason why the 145-pound fighter is still undefeated. Even after sitting on the bench for nine months, he is still ready to go.

“I’ve been training non-stop,” Soares explained. “It’s just been bad luck. I was supposed to fight and then I didn’t fight. And then Titan had some venue problems, so they had to take some months off for cards that I should have fought on. Then, there was a card in Russia, but my coach didn’t want me to fight in Russia. He thought it was sketchy up there, and he doesn’t like that stuff. It’s just been bad luck that I didn’t get to fight.

“I don’t really care who I fight. My coaches make those decisions. You just put them in front of me, and I’m going to fight them. I only watch maybe 30 seconds of them fighting. My coaches just send me a detailed email about what they’re going to do and what we’re going to do, and that‘s what we work on.”

After a long wait, the day is finally approaching for Soares to defend his title. On Friday night, he steps back in the cage at Titan FC 52 in Fort Lauderdale, Fla., to face Caio Uruguai. The Brazilian challenger is 7-1 as a pro and 3-1 in Titan alone. Soares doesn’t care what his opponent brings to the table, though. For him, it’s all about the win.

Soares is having fun climbing the ranks, and the Titan title is a nice step in the right direction. However, he has his sights set on a much bigger prize. He is fighting like a bulldog to get there, too.

In the meantime, his task is to beat Uruguai. No fight is easy, but his track record speaks for itself. On Friday night, in a fight that airs live on UFC Fight Pass, Soares will channel his inner bulldog as he battles toward the next evolution of his career.

“I’m super persistent,” he said. “It’s why I am where I am. I stay on track. I’ve been injured, I’ve been hurt, and lots of things come up, but I’m still here. I’m still fighting, and I’m still winning.”

Soares would like to thank his coaches and training partners at Freestyle Fighting Academy, as well as his manager at First Round Management. He would also like to thank White Lion Therapeutics and, of course, his family, friends and fans. Follow Jason on Twitter: @SpecimenSoares
Advertisement