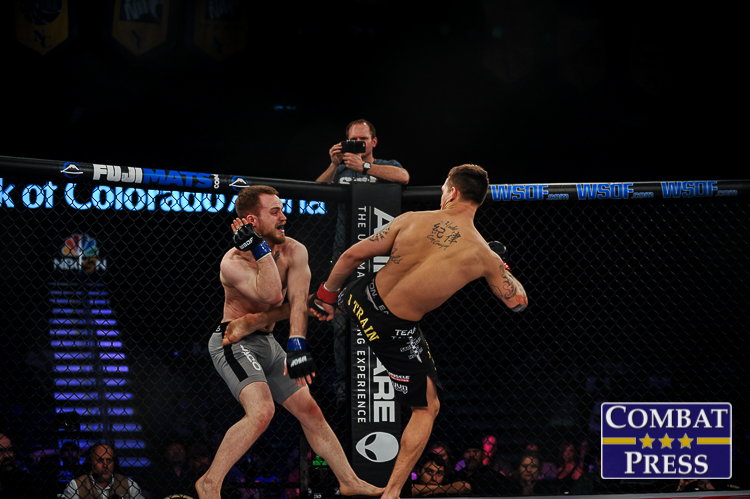 In 2019, Justin Gonzales had an opportunity to earn a UFC contract by competing on Dana White’s Tuesday Night Contender Series. Despite a dominant performance in which he virtually took no damage, White was not impressed enough and took a pass on the Top Notch MMA fighter. This was a mistake, but 2020 could be the year White changes his mind.

Gonzales is a very good wrestler, a skill set that has been on display in most of his fights. He closes the distance with ease, grabs a hold of a leg, and puts his opponent on their back. That’s not to say he can’t strike. Though he scores the takedown and holds opponents down most of the time, he can box too. He moves well, has good technique, and can score on the feet. In 2019, he went 2-0 with a knockout of Bruno Ferreira and the aforementioned domination of Zach Zane on the Contender Series.

Gonzales isn’t an efficient finisher, though. It’s a valid criticism, but his dominance should render that concern moot. Gonzales is a tough out for most fighters in the UFC featherweight division. He should be ready in the event of a short-notice opportunity while taking a fight as quickly as he can in 2020. This should get him on the roster before long.

For the second year in a row, Brazil’s Leonardo Limberger lands a spot on this list. The 25-year-old Rizzo RVT product continues to be one of the top featherweight prospects in the world. He should be on every scout’s radar going forward.

Limberger is a student of the legendary Pedro Rizzo, who is a great man to have overseeing a fighter’s progression. Since his only loss in 2013, Limberger has been on a tear on the Brazilian regional circuit. He only competed once in 2019, but it came in a decision win over Russian prospect Boris Federov. He’s primarily known for his submission game, but he is no slouch on the feet either.

The Brazilian will need to be busier in 2020 if he wants to really catch the eye of the UFC matchmakers. He’s clearly skilled enough to be on the roster. Luckily, he’s still very young and has not hit his prime yet. Still, the UFC should sign him as soon as possible.

Russian fighter Yusuf Raisov is one of the best prospects in the world at any weight class right now. The 24-year-old, who makes his second appearance in this series, is already immensely skilled and continues to get better with every fight. He has a long career ahead of him.

Raisov is a powerful guy, possessing strong wrestling ability and knockout power. He’s also a skilled submission artist with bear-like grip strength when he grabs hold of an opponent’s neck. He has not lost since 2016. Since then, he’s posted seven consecutive wins, including 2019 triumphs over Joao Nogueira by decision and formerly undefeated Raimundo Batista by a stoppage due to a broken jaw.

This guy could be a contender in the UFC at some point in his career. He’s that good. Imagine how good he’ll be in a couple years with even more experience. Before too long, Raisov will be a world-class fighter who shares the cage with some of the biggest names in the sport.

Pat Sabatini had a tough time holding onto fights in 2019, but it doesn’t negate the fact that he’s one of the best featherweight prospects in the world. On two separate Cage Fury Fighting Championship cards, Sabatini lost opponents for various reasons, which really hurt his 2019 campaign and left him with just a 1-0 record for the year.

The MPR Endurance Team member trains a lot with Renzo Gracie. Most of his wins have come by way of submission. His two go-to holds are the rear-naked choke and the heel hook. In 2019, he defended his Cage Fury featherweight championship against Fabricio Oliveira, further establishing himself as a top 145er outside the UFC.

Hopefully, 2020 is kinder to Sabatini’s schedule. He is a guy that could sign straight away with the UFC, though there’s a possibility he has to take the Contender Series route to the UFC.

Fourteen fights into his MMA career, Jason Soares has not lost a professional bout. That is very impressive, considering he’s taken four fights with Titan FC. Clearly, he is a top prospect in the featherweight division, and he should grace the UFC roster at some point in 2020.

Soares is a physical specimen, possessing impressive strength and knockout power. However, his best attributes are his wrestling and submissions. Most of his wins have come via choke. Once the Freestyle Fighting Academy product grabs your neck, he won’t stop till your eyes roll back. It was an impressive year for Soares, who ran up a 3-0 tab with Titan FC. He scored a one-punch knockout of Caio Uruguai, a ground-and-pound TKO of Ariston Franca, and an impressive armbar submission of Andrew Whitney en route to a Titan FC featherweight title reign.

UFC President Dana White wasn’t exactly thrilled with how Soares approached him after his Titan FC fight that was featured on Dana White: Lookin’ for a Fight, but that should not stop the UFC from hiring a guy as obviously talented as Soares. He’s clearly in the prime of his career, and there are plenty of winnable fights for him in the UFC. As an added bonus, he’s a New York City kid that could fill out one of the Madison Square Garden cards the UFC hosts each year.