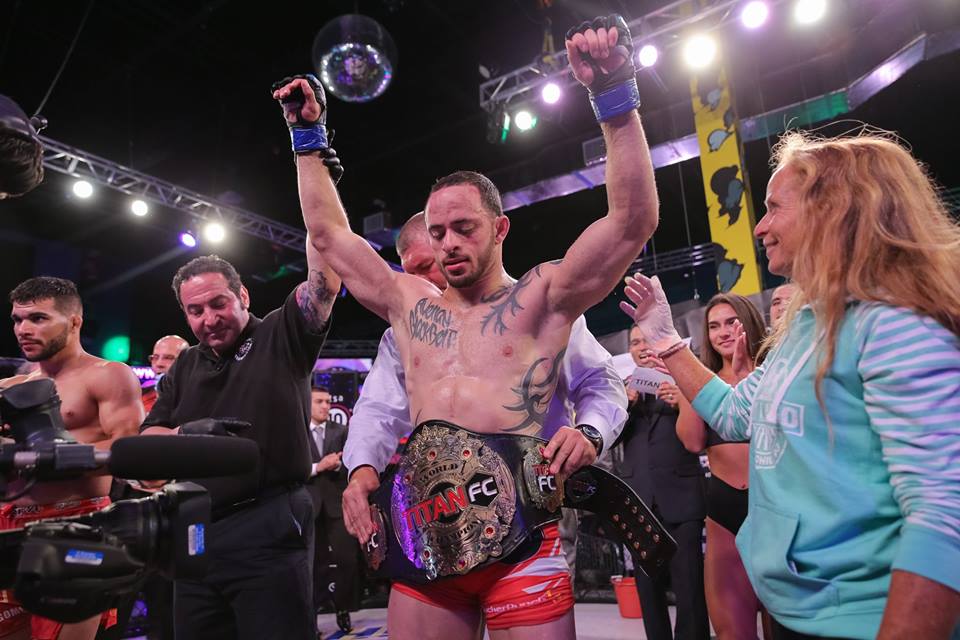 Titan Fighting Championship has a legitimate top prospect in its stable in featherweight champion Jason Soares. The undefeated fighter is already on the verge of a UFC contract. For now, though, he returns to action to defend his title against Anderson Hutchinson at Titan’s 54th event.

Soares debuted in 2012 with a knockout finish of Daniel Hernandez. He became a mainstay of the Fight Time promotion for four years, and he reeled off 10 victories and a featherweight championship reign during his stay with the organization. “The Specimen” accumulated six finishes before fighting for the vacant Fight Time featherweight strap. He locked in an armbar in the first round to submit Randy Barosso and claim the gold. After a non-title fight under the Fight Time banner and a failed bid on The Ultimate Fighter 22, Soares returned to defend his title with a fifth-round submission of Danny Chavez and a decision nod over Guilherme Faria. His TUF campaign ended with a majority-decision loss to Julian Erosa. The Freestyle Fighting Academy product finally ventured outside of Fight Time to challenge Luis Gomez for the Titan FC featherweight crown. Soares sunk in a rear-naked choke early in the fourth frame of their contest to submit Gomez and claim the strap. He went on to defend the title with a first-round finish of Caio Uruguai at Titan FC 52 in January. The 29-year-old now has eight submissions and two knockout victories on his still-perfect resume.

That’s a far better record than his challenger brings to the cage. Hutchinson has two losses through nine pro fights. The 32-year-old “Superman” posted a perfect amateur mark through nine fights, but he only managed four wins at the pro level before suffering his first loss. The Pete White Boxing and MMA disciple, who turned pro in 2014, dropped a split decision to Danny Chavez in early 2015. Hutchinson bounced back with three more wins, but he stumbled once more in his most recent outing, a split-decision loss to Mike Barnett at Island Fights 50. Hutchinson has only one submission and one TKO as a pro, but he did score several victories by way of tapout as an ammy competitor.

Soares has made an inspirational comeback from a motorcycle accident that left the aspiring fighter battling to even walk again, let alone fight. That accident only slowed Soares down for a matter of months, though. He’s looked every bit of the three-sport athlete he was in high school. Soares, who has a wrestling background, performed admirably even in the losing effort against Erosa. Erosa dished out just enough damage to Soares while Soares pursued takedowns, and this was likely the difference in the fight’s outcome.

Hutchinson is a grinder who tends to do just barely enough to get the decision, and sometimes he falls short in that quest. “Superman” has four split verdicts on his resume, and only half of these decisions have gone his way. His losses came to solid up-and-comers, but ones who are much further down the food chain than Soares, who has been a dominant fighter throughout his pro career.

When Soares has gone the distance, the fights have ended in a decisive verdict for the wrestler. He’s scored a very impressive number of finishes, too. Hutchinson seems to represent another fighter roughly the caliber of Soares’ last foe, the aforementioned Uruguai. The champ’s wrestling chops and aggressive submission game should once again allow him to prevail. Soares has plenty of time to find a finish here.

Titan FC isn’t the only promotion with an undefeated champ in action this weekend on UFC Fight Pass. Britain’s Cage Warriors organization hosts its 104th event when it travels to Wales, and bantamweight kingpin Jack Shore tops the bill. The Welsh star will attempt to defend his crown against Scotland’s Scott Malone.

Shore put up a ridiculous 12-0 mark as an amateur before finally opting to go pro in 2016. The “Tank’s” ammy run included eight submission victories and a 2015 IMMAF European Open Championships lightweight tournament win. He needed less than two minutes to submit his opponent in his pro debut. Then, he joined the Cage Warriors organization and reeled off six stoppage wins. He finally reached the scorecards when he encountered UFC veteran Vaughan Lee at Cage Warriors 92. The Tillery Combat MMA Academy export got right back to the stoppages in his next two fights, with finishes of Weslley Maia and Mike Ekundayo. The latter of these contests netted Shore the promotion’s bantamweight strap.

“Boom Boom” Malone hasn’t had quite the same level of success throughout his career. After a 4-1 amateur run, the Shooters Dundee product made his pro debut with a submission loss to Imam Dabo in 2015. He didn’t return to action until late 2016, but he righted the ship and launched into what would eventually become a six-fight winning streak. He has three wins via strikes and two by way of submission. Malone’s last three fights have taken place under the Cage Warriors banner. He’s defeated increasing levels of competition with the promotion, beginning with Jason Jenkins and Adam Amarasinghe. In his most recent contest, the 31-year-old tapped former Cage Warriors title challenger and Shore teammate Josh Reed.

Shore, with a combined 22 fights across the amateur and pro levels, is the more seasoned man. The 24-year-old also holds the more notable victories with his decision of Lee, a submission of the formerly undefeated Ayton De Paepe, a knockout of the formerly undefeated Ekundayo and an amateur run to a IMMAF crown. He’s convincingly finished everyone except for the UFC vet Lee, and he has an added motivation here in avenging his teammate’s recent loss to Malone.

Malone is a promising prospect, but this seems like a rushed title shot. His victories over Reed and Amarasinghe were strong showings, though. He’s a threat on the feet and on the mat, where he can beat opponents with his submissions or via ground-and-pound. However, Malone lacks the crisp combinations of Shore. Furthermore, he’ll have to be wary of Shore’s excellent level changes and the Welshman’s ability to plant his feet and counter.

Everything Malone can do, Shore seems to do better. This fight could be an all-out war between two exciting bantamweights, but Shore’s experience, well-rounded arsenal and finishing ability give him the edge. Expect a few momentum swings before Shore finally scores a late knockout or TKO.

The trend of undefeated fighters featured this week continues with Poland’s KSW organization, which is set to hold its 48th event on Saturday. The lineup doesn’t feature as many significant names as some of KSW’s recent cards, but the docket includes a showdown for the interim featherweight title between promotional regular Roman Szymański and France’s Salahdine Parnasse, who remains undefeated through 13 pro bouts.

Szymański’s name has appeared before in this feature, but only in the listing of additional key bouts for KSW events that feature far bigger names. The 25-year-old made his pro debut in 2012 to disappointing results. After falling in his first two fights, the Poznańska Akademia Linke Gold Team member finally found his groove and went on an eight-fight winning streak while making stops in several European promotions. Eventually, he claimed the Fight Exclusive Night lightweight championship, but he failed to register a successful defense of the belt, instead dropping it via decision to Joilton Santos. Despite the loss, Szymański drew interest from KSW. His tendency to take part in “Fight of the Night”-quality contests with FEN was enough to earn him a roster spot with Poland’s biggest organization. He made his promotional debut with a submission finish of Sebastian Romanowski, but his last three fights have gone the distance. Szymański won two of these fights, but a loss to The Ultimate Fighter 22 alum Marcin Wrzosek is sandwiched between these victories.

Parnasse, 21, is one of the most promising up-and-comers to emerge from France. The Atch Academy fighter debuted in 2015 and won his first four outings before fighting to a draw in his first venture outside of his homeland. Parnasse redeemed himself five months later with a victory over that same opponent, LiGe Teng. The win over Teng sparked an eight-fight winning streak for the Frenchman that includes three victories with the KSW organization. His list of victims in the KSW cage isn’t too shabby, either. His promotional debut ended in a majority nod over Łukasz Rajewski, and he has added unanimous verdicts over Artur Sowiński and the aforementioned Wrzosek. The youngster has four submissions and one knockout on his resume.

Szymański has put everything together to build a respectable legacy after a faceplant out of the gates. However, the veteran is hardly posting head-turning numbers. He’s lost to solid-but-unspectacular fighters in Santos and Wrzosek, and one of his early losses came against a 1-4 opponent who now sits at a 4-7 mark. Szymański also seems to struggle with weight cuts — he tipped the scales at more than 148 pounds for his most recent featherweight affair — and that could also hurt his performance here.

Parnasse succeeded where Szymański failed by defeating Wrzosek. That victory bolsters a resume that already includes a win over Sowiński. This gives the Frenchman wins over two former KSW titleholders, a feat that surpasses anything his opponent has accomplished. This is an excellent opportunity for the youngster to add another significant win — and a belt — to his collection. Parnasse isn’t much of a finisher, but he has what it takes to edge his Polish opponent on the scorecards.