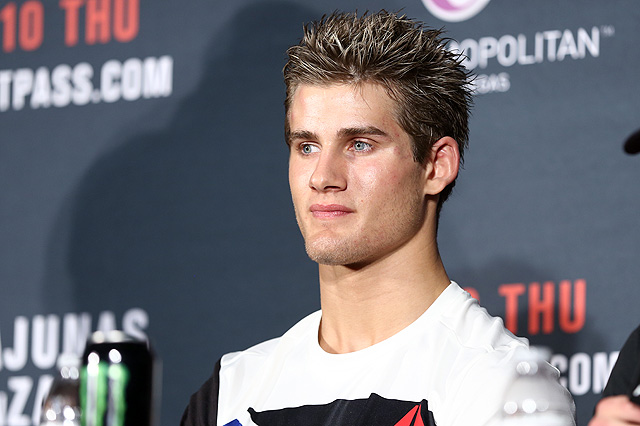 Is the UFC Paying Sage Northcutt Too Much, Too Soon?

Over the course of an insane three days last week, the UFC put on over 30 fights, had two belts change hands and possibly saw the birth of its biggest star of all time, Conor McGregor. Between the abundance of pageantry surrounding UFC 194 on Saturday, a high-stakes fight taking place between Frankie Edgar and Chad Mendes on Friday and the McGregor show that basically dominated the entire weeklong extravaganza, there was so much going on that it became increasingly hard to prioritize which fights actually mattered in the grand scheme of things once the weekend was over.

With that in mind, a bout like Sage Northcutt’s UFC Fight Pass-streamed win last Thursday night against an unknown opponent shouldn’t even be on a fight fan’s radar after such an eventful three days. Or at least it wouldn’t be, if the fight featured anyone other than Northcutt. The more fans get to see Northcutt in action, the more obvious it becomes that the 19-year-old lightweight is one of the sport’s future stars. Even though he won only his second fight in the Octagon last week, Northcutt’s combination of impressive work inside the cage and a humble, likeable personality have made him the sport’s most promising young star barely three months into his UFC career. By all accounts, there are nothing but big things in the charismatic Texan’s future, and judging by his ridiculous salary after less than six months with the company, it’s clear the UFC agrees.

Northcutt made $80,000 last week — $40,000 to show and another $40,000 with his win bonus. Those are mind-boggling numbers for a fighter who had only had one prior UFC fight on his contract, and even more insane when you consider that “Super” Sage has less than 10 pro fights in his entire career. In fact, when you compare his payout to some of the other fighters that competed during the UFC’s three-day marathon, things almost get downright silly.

Rose Namajunas, who won the main event on the same card as Northcutt, ended up taking home $54,000 despite being ranked in the top five of her division and having competed for a UFC title barely a year ago. Aljamain Sterling, a top-five bantamweight and fantastic undefeated prospect in his own right, ended up making a grand total of $28,000 after his show money and win bonuses. Jeremy Stephens, a top-15 featherweight that has been with Zuffa for almost 10 years and has competed for the company over 20 times, left UFC 194 with a loss and a check for $43,000. Granted, his win bonus would have pushed him to $86,000, which is slightly more than Northcutt banked, but Stephens has also fought for the promotion a good 20 times more than the youngster.

Those are just a few examples of fighters from this past weekend that made a fraction of what “Super” Sage took home, many of them higher ranked or with five times the tenure as Northcutt. It seems Northcutt’s built-in star power has already earned him a really solid contract with the UFC, and as his star continues to rise with each win inside the Octagon, it’s safe to say that number is only going to rise. But does Northcutt really deserve to be making that much more than a good number of the UFC’s best and most loyal employees?

The truth is, while Northcutt probably doesn’t quite deserve the pay he’s getting at this point in his career, it’s hard to fault the UFC for giving him ridiculous money in order to keep him under the Zuffa banner. Consider the amount of hype that was behind Northcutt before he even stepped into the Octagon. With that in mind, it’s not too surprising that the lightweight prospect snagged himself an awesome deal when he decided to join the UFC.

Prior to Northcutt’s debut in October, the internet was buzzing about the UFC’s next potential big-time star. This was before he’d even shown anyone outside of the hardcore fans what he could do. If the fans were that on top of Northcutt’s potential, it’s probably safe to say that the every major MMA organization was in the know as well, a fact that likely gave Northcutt quite a bit more pull than your average 19-year-old looking to get into the UFC.

In all reality, the UFC is likely only paying Northcutt his current 40-40 contract because the promotion ended up having to outbid one of its competitors. It’s highly doubtful that Zuffa wanted to pay a guy with no experience in a major promotion more than probably 70 percent of the fighters on the roster, but what was the UFC supposed to do? Should the organization let a potential cash cow get away and sign with Bellator or the World Series of Fighting? If it comes down to overpaying Northcutt now so the UFC can hold on to him when it matters most, the UFC made the only logical choice.

Yes, it sucks to see a guy with less than 10 fights making more money than a guy that’s fought for over 10 years. However, just like in everything else in life, you make what you’re worth, not what you deserve. As it turns out, Northcutt, just two fights into his career, is worth a whole lot more than most of the other fighters under UFC contract. While it may seem like the young star is being overpaid at the moment, this is going to be a laughable argument pretty soon if he can become as good as many fans believe. Paying $80,000 a fight for a prospect is cringeworthy, but paying that amount to get the rights to a potential future champion and face of the company is damn near priceless.