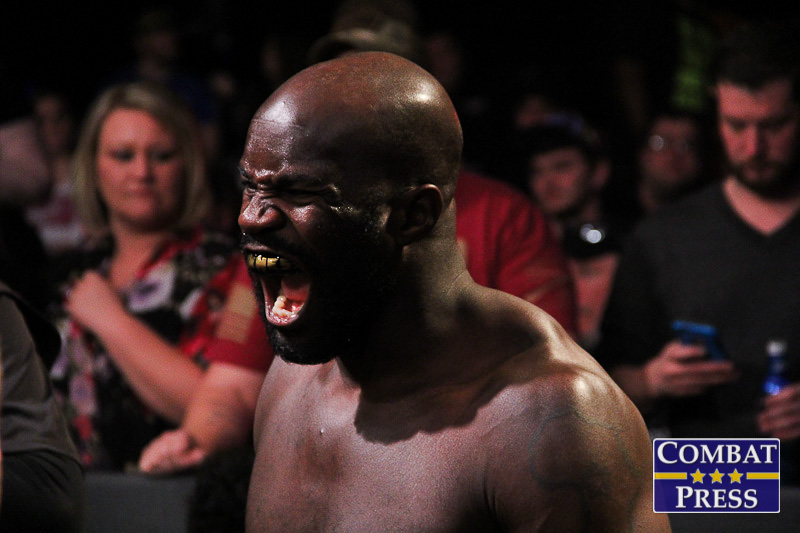 Bellator MMA makes its return at the H-E-B Center in Cedar Park, Texas, for Bellator 161. There are no title fights on the card, but there are a couple of possible title shots at stake.

The headliner will be a heavyweight feature fight between UFC veteran Cheick Kongo and the rising Tony Johnson. Johnson has been on a recent roll with victories over Raphael Butler and Alexander Volkov on his way to this fight. He could be looking at a title shot if he can score the biggest victory of his career against Kongo. Kongo, meanwhile, is out to climb back to the promise land and take a second attempt at achieving Bellator gold.

The co-main event features another very recognizable face. Former Bellator champ Joe Warren takes on Sirwan Kakai. Warren has stumbled in his two of his last three fights, and his one victory in that stretch was changed to a no-contest after a failed drug test for Warren that led to a suspension. Warren will look to change his fortunes and get back to another title shot with a victory over Kakai, a UFC veteran who lost in his Bellator debut fight against Joe Taimanglo.

Derek Campos, another Bellator veteran, will also take part in the Bellator 161 main card. Campos goes up against prospect Djamil Chan. Campos broke a two-fight skid in his last fight with a knockout victory over Melvin Guillard.

The strawweight division will also see some time in the limelight when Anastasia Yankova seeks her second Bellator win. She faces undefeated Veta Arteaga.

The Bellator 161 preliminary card will air on Bellator.com beginning at 7 p.m. ET. The main card airs live on Spike TV at 9 p.m. ET.

With Vitaly Minakov no longer at the top of the Bellator heavyweight pecking order, Bellator’s current lineup of heavyweights are fighting for their chance to capture some gold. The Bellator 161 headliner isn’t a title fight, but the winner seems likely to land in a championship showdown. Can Cheick Kongo get past Tony Johnson and go on to finally capture an elusive title belt, or is this the breakthrough moment for Johnson?

Johnson has been on a tear in Bellator, rattling off wins against Alexander Volkov and Raphael Butler. Kongo is an entirely different test, though. The UFC veteran isn’t just a striker. He knows how to clinch and generally wear on just about any fighter he faces. Kongo is a big, strong fighter who won’t just rely on just one weapon to take the victory.

Johnson has lived by the same grinding method in his last few fights. He hasn’t been entertaining, but he gets the job done each time. Johnson isn’t the most technical fighter out there, and this is probably where the train stops for him. He hasn’t been tested against a former UFC veteran with the wins Kongo sports. Johnson’s most notable opponent, Volkov, isn’t a terrible fighter, but he isn’t on par with the heavyweights of the UFC. Kongo’s a different case.

Johnson will have to hope Kongo has a severe breakdown in this fight. Otherwise, Kongo isn’t going to give up the takedown early for Johnson. This isn’t to say it can’t happen. After all, Muhammed “King Mo” Lawal was able to score takedowns very effectively against Kongo. There’s just one problem: Johnson is no King Mo.

This comes down to who can be more effective in getting the fight to the ground or into the clinch against the cage. It’s difficult to pick against Kongo in that realm. The UFC vet might make it back to a title fight in Bellator, but who will he face? Matt Mitrione could be around the corner — that would be a great fight between two UFC ex-pats. Until then, there is only the glimmer of hope for a title fight, but that should drive Kongo to work hard for the victory in this headlining contest.

Joe Warren has held multiple Bellator titles, but he’s had a rough time lately. He’s lost two of his last three, and the one win he did record was changed to a no-contest after Warren’s drug test came back positive for marijuana metabolites. Can Warren turn things around and regain his championship form, or is he doomed to be the Bellator bantamweight division’s gatekeeper?

It’s hard to say just exactly how much is left in Warren’s tank. He is 39 years old and his performances have been a mixed bag lately. He has lost two of his last three. He hasn’t looked great, and his last official win against Eduardo Dantas came almost two years ago. His grappling looked great against the Brazilian, but it has been a long time since he flashed that level of skill. If Warren hasn’t already cemented himself as a gatekeeper, then he’s well on his way. His last loss — he suffered a first-round submission defeat against prospect Darrion Caldwell, who was looking to get his first big-name victory — certainly qualifies.

Warren is pretty much already there as a test for the guys climbing the divisional ladder on their way to a title shot. Kakai is the next man in line. He made the transition from the UFC to Bellator, but he is coming off a loss against Joe Taimanglo in a disastrous promotional debut in which Kakai was considered the favorite to win. Warren makes for a tough bounce-back fight for Kakai, but a necessary one as well.

There are two ways to look at this fight. Either Warren is a name to help elevate Kakai within the division, or Kakai’s UFC veteran status is going to help Warren rebound, assuming Warren can get the victory. Regardless, Warren is always going to hang around the top of the division. He is Bellator’s “company man” and is always willing to help Bellator. However, even as a gatekeeper, Warren can rest assured that a title shot is never really out of the realm of possibility.

Warren’s going to use his wrestling and get back to basics to try to take this fight home. There really isn’t much else Warren can do at this age but rely on his great wrestling base. It will be an interesting back-and-forth, but one Warren will ultimately take by decision.

Bellator has two women’s flyweight bouts slated for this card. On the main card, Anastasia Yankova meets Veta Arteaga. The prelim lineup features a clash between Kenya Miranda and Emily Ducote. None of these fighters have more than five fights under their belt, and only two remain undefeated. Which fighter (or fighters) will go on to bigger things?

Well, after this card, only one fighter will remain undefeated: Yankova.

Yankova has the most potential out of the four women. Want proof? Look no further than her debut performance for Bellator against Anjela Pink. It was a quick first-round submission victory for the flyweight fighter, and it marked her third submission victory overall.

However, Yankova wasn’t in the cage for an extended period, so it’s hard to gauge exactly how well she will do in the long run. In fact, it’s hard to talk about any of these fighters in a meaningful way. They’re pretty much the MMA equivalent of rookies in the sport, with only a few fights under each of their belts. Yet, Yankova’s finish was impressive and can’t be overlooked. It took her barely over a minute and a half to secure the armbar on Pink. If she can keep it up with the submission finishes, she has a bright future.

Yankova’s age definitely helps. She is only 25 years old. She has some prime years ahead to learn and develop into one of the better flyweights on Bellator’s roster. There aren’t many 125-pounders on the roster who can lay claim to a ton of experience, and this should only help Yankova to become a staple in the division.

This all isn’t to say none of the other fighters can go on to do big things. Ducote is only 22 years old and has plenty of time to emerge as a star. She is coming off a second-round submission victory over Bruna Vargas in her Bellator debut, and another win at Bellator 161 could very well be a stepping stone to bigger things for Ducote.

The first is clash between Derek Campos and Djamil Chan. Campos is a known Bellator veteran and a very talented fighter who could take a step forward to a title shot in the lightweight division. Chan is coming off an impressive knockout victory in his promotional debut and has nine knockouts total under his belt. With a win, Chan becomes a very interesting prospect in the division.

The other fight worth mentioning is a little further down the card. It takes place in the featherweight division and features Mark Dickman and Daniel Pineda. Pineda is a UFC veteran who is coming off a split decision loss in his last fight. All of Pineda’s victories are finishes. He is a very entertaining fighter to watch, too. Dickman won his Bellator debut with a third-round knockout victory and could advance his career a great deal with a victory over Pineda.