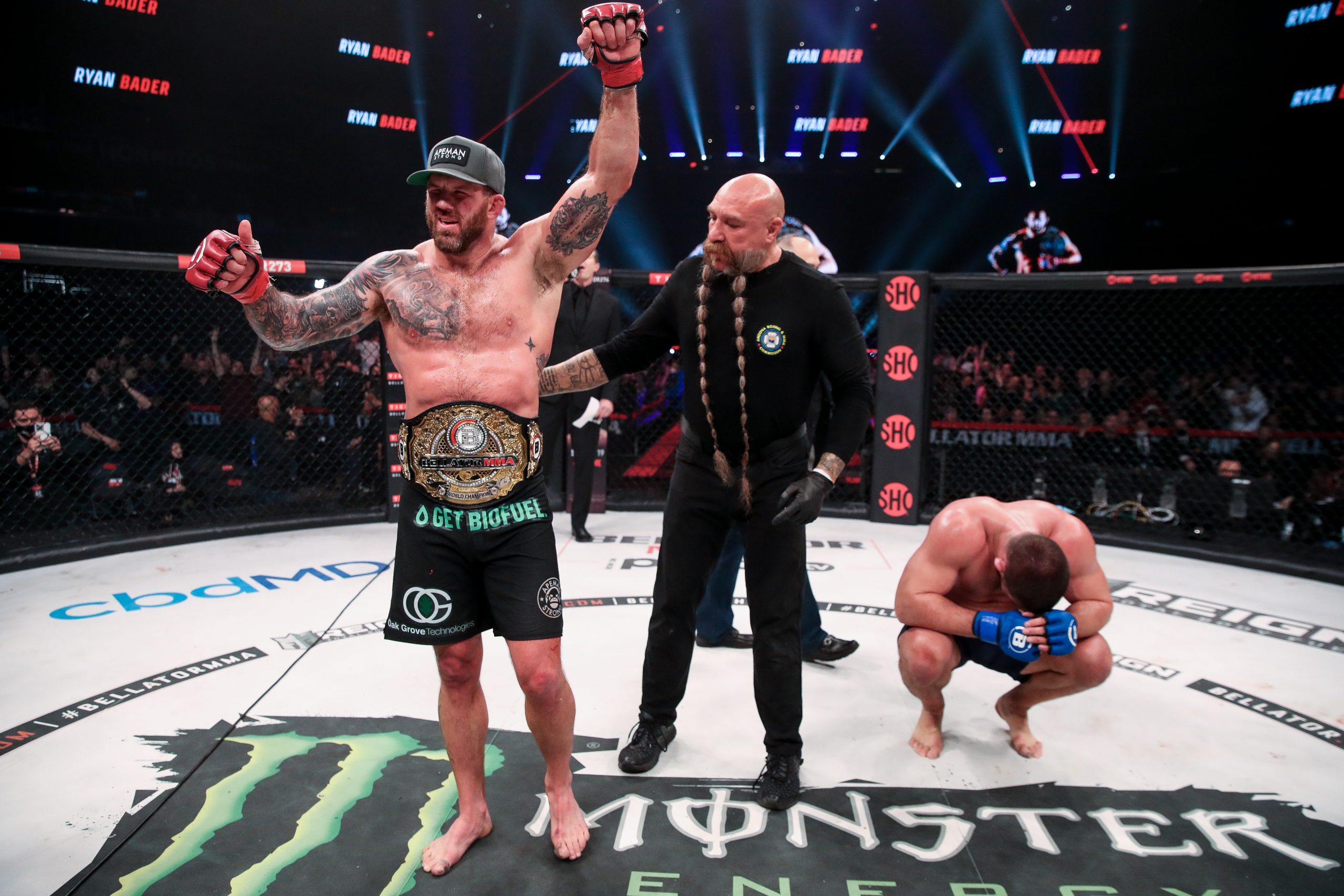 On Friday, May 6, Bellator packs their bags and makes a trip to Paris, France. The country that once banned MMA will now hold one of the most underrated Bellator fight cards of the year when Bellator 280: Bader vs. Kongo 2 kicks off at the Accor Arena. With 13 matchups currently scheduled, the number of French fighters should have the crowd exhilarated.

The main event features a heavyweight title fight between defending champion Ryan Bader and hometown hero Cheick Kongo. At 46 years old, Kongo looks to build off his last win and dethrone the former two-division champion. Bader and Kongo fought once before at Bellator 226, but the fight ended with a first-round no contest due to an eye poke.

In the co-main event, Yoel Romero returns to Bellator against one of the toughest MMA fighters to finish, Alex Polizzi. Expectations for Romero are sketchy after losing his last four fights, but his experience will always give him the chance to win. Meanwhile, Polizzi’s stock is rising after winning his last three fights. Other fights to watch include Lorenz Larkin vs. Kyle Stewart, Soren Bak vs. Charlie Leary, and Pedro Carvalho vs. Piotr Niedzielski.

The Bellator 280 preliminary card airs live on Bellator’s YouTube channel starting at 12:30 p.m. ET with the main card following on Showtime at 4 p.m. Check out the full Bellator 280 preview and predictions below.

The last time Ryan Bader and Chieck Kongo met, it ended prematurely with an eye poke; does the fight come to a satisfying conclusion this time around?

The first time around, Kongo vs. Bader ended in disappointment after an eye poke led to a first-round no-contest. Before the fight ended, Bader had begun dominating Kongo on the ground. Now that Bader has lost his light heavyweight title, officially beating Kongo and defending his heavyweight belt is crucial.
Although Kongo won last time out, he beat Sergei Kharitonov, who is 41 years old and past his prime. Meanwhile, Bader has been busy trying to fight off the younger generation. Bader’s wrestling and speed advantage should be clear against Kongo.

The crowd will be on Kongo’s side, but everything else should favor Bader. Other than a wild knockout from Kongo, Bader should be able to take him down and finish the fight without an eye poke this time.

Yoel Romero lost three in a row in the UFC before joining Bellator and then dropped a decision to Phil Davis in his promotional debut; does the 45-year-old have enough left to get a win over Alex Polizzi?

Romero has lost his last four fights, but MMA fans should not be concerned. The “Soldier of God” was fighting only elite competition before parting ways with the UFC and joining Bellator. After joining Bellator, Romero put up a good fight against Phil Davis and almost came out on top.

Although Polizzi is not elite yet, he has the makings of a future title contender. He is durable, relentless, and aggressive throughout the entire fight. Polizzi comes in as a solid underdog, but this is the definition of a live dog.

Romero is explosive and unpredictable, but hasn’t been able to get a win since 2018. If the plan is to finish Polizzi, Romero could be in for a surprise . Romero will most likely come out firing quickly. If Polizzi can weather the early storm, he should be able to find success in the later rounds. This could be Polizzi’s breakout moment as he squeaks out a tough decision win.

Lorenz Larkin has quietly put together a five-fight winning streak since 2018; can he make it six straight by defeating Kyle Stewart?

Larkin will forever be one the underrated UFC fighters that never got full credit for his craft. After parting ways with the UFC in 2017, Larkin struggled by losing his first two Bellator fights. Those losses must have woken up Larkin, because he has won five straight fights going into Bellator 280.
Kyle Stewart has fought all over the country, including six different promotions in his last seven fights. Although he has lost five out of his last ten fights, Stewart always shows up ready to give his opponent a tough matchup.

Larkin vs. Stewart will most likely depend on who can lead the dance. Both fighters tend to apply pressure and utilize their striking once their opponent is against the cage. Stewart usually embraces the striking battle, which could be a mistake. Larkin should be able to use his power and fight IQ to get his first knockout since his brutal beatdown against Neil Magny in 2016.

The sleeper match-up is a middleweight bout between Mike Shipman and Gregory Babene. Shipman was dominating lower competition before losing two tough fights in 2019. Once Shipman returned in 2020, he looked phenomenal and won a unanimous decision to get back on track.

Holding a record of 21-11, Babene has won six straight fights, with five first-round finishes and one second-round finish. Although the competition has varied, he won all six of those fights by submission. The Frenchman now looks to get his seventh straight win in front of his hometown crowd.

Shipman vs. Babene is a sleeper match-up, because both fighters finish fights early and often. Babene has 18 finishes through 32 fights, and Shipman has 13 finishes through 17 fights. If both fighters can escape the first round, this matchup could turn into a war between two fighters ready to do whatever it takes to get the finish.