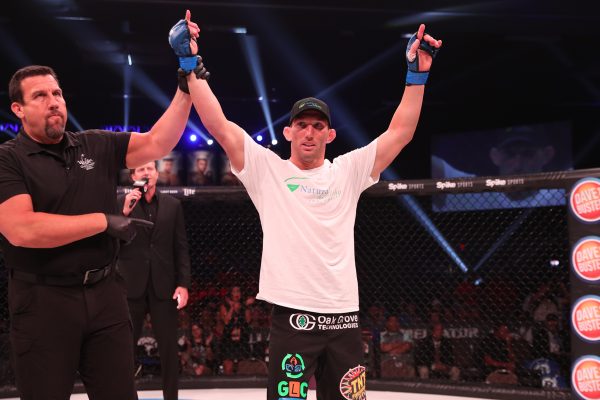 Bellator 205’s John Salter: The Storm of the Eye

Twice in a row, the same guy gets hit with a storm less than two weeks before a very important event. Is it a coincidence or a sign?

John Salter is a man with a dream. He wants to be a world champion. He’s been working toward this dream professionally since 2009. In his wake, he’s left a path of destruction. Not once in 15 wins and three losses has he ever had the game clock wind down to zero.

Salter is currently riding a seven-fight winning streak. He is one of the best 185-pound mixed martial artists in the world. His last five fights took place under the Bellator banner, which put him in line for a No. 1 contender spot. However, another storm has been brewing right alongside of him.

In February, Bellator put Salter on a collision course with jiu-jitsu legend Rafael Lovato Jr. for a next-in-line position in the company’s middleweight division. They were set to square off on April 28 at Bellator 198. However, in the final days of camp, Salter got some disheartening and unexpected news.

“That was a nightmare,” Salter told Combat Press. “About a week and a half, or maybe two weeks, before the fight — I had already sent my medicals in — and I got a call from the athletic commission saying they flagged me for an issue with my eyes. My eyesight hadn’t changed, and I hadn’t had any differences or anything like that, so I never really thought it was a big deal. I talked to Bellator, and I had it set up to do another eye exam in Chicago to make sure everything’s taken care of. It wasn’t really anything I was concerned about.

“Right before I left, I was getting my last workout in before I get on the plane and I started getting calls from everybody, because the commission already flagged it so I couldn’t fight. I was off the card before I knew I was off. That’s what happened there.”

The scrapped bout and the problem with his eyesight completely derailed Salter. Lovato went on to fight, and beat, Gerald Harris. On Friday night, at Bellator 205 in Boise, Idaho, Salter will get a chance to take his next step when he finally meets Lovato in the cage.

Salter is bringing in a lot more MMA experience than his opponent. Since 2009, the Wilmington, N.C., gym owner has put together eight submission wins and seven knockouts. He has fought three times in the UFC, too. Salter attributes most of his success to his training partners.

“Wilmington’s really got a lot of good athletes and fighters, but everybody’s at different places, so I started Salty Dog to kind of get everybody together,” Salter explained. “It’s been very good. We’ve had a lot of people coming in to train, and Derek Brunson’s got his own gym about 15 minutes away. We train back and forth with each other. It’s a pretty good setup. We get a lot of good training in. I think the past two years, it’s been really good, because I’ve been able to get everybody together.

“I think it’s all in my training partners. When I was out in California, I had a great group of training partners out there that, every single day, they were going to be there for every single practice. There was never that question [of], ‘Am I going to get pushed?’ And then I came to Wilmington three years ago, and same thing. I got some good, solid guys, and I never have to question whether I’m getting good training or not. It’s just consistent, and the guys are willing to drill with me [and] guys who are willing to go live with me.”

With all of the experience under his belt, Salter understands that training for Lovato is a different animal. This is a multiple-time world champion who isn’t afraid to strike. Lovato will also enjoy a significant height and reach advantage.

“I need long guys,” said Salter. “I can’t train with guys that are like 5[-foot-]10 when I’m training for Lovato. When I’m out in Charlotte and training with Lucas Lepri, he is the best in the world, but he doesn’t have Lovato’s build. So, I got to be able to travel.

“I’ve got some friends in Tennessee and Kentucky. I went to Nashville for a week. They’ve got these tall black belts who are doing really well in all of these jiu-jitsu tournaments. [I’m] getting those guys in there to get that build, so I can grapple with all these guys. I’ve got strikers in there who are longer than him, so I can get that build and striking with guys who are taller. I think that’s really going to be a big factor in this fight — being prepared for a guy his size.”

Preparation is the key to preparing for any storm. As Salter was within two weeks of Bellator 205, Hurricane Florence, which had been brewing in the Atlantic Ocean, started bearing down on the Eastern seaboard with the eye set to make landfall in Wilmington.

“I’m actually in Charlotte right now, finishing up my camp out here, which is great,” Salter said. “I’ve got a lot of friends here and good camps to train at, so I came out here to kind of finish everything up. When I finish training tonight, I have to head to Knoxville, so I can actually fly out in the morning. So, I’m going to be there real early.

“The big thing is just to keep everything high from all that rain. Luckily, our gym and our house is high enough that I think we’re going to be fine. I’ve just been training hard. A lot of people left early, but, luckily, most of my training partners stayed in town, so we were able to get some good training in. We headed into Charlotte last night, so I got up [and] got a good training session in with some high-level guys. I’ve got one more training session in Charlotte and then I’ll be getting into Boise, and I’ll be finding a gym there to get some workouts in.”

The storms keep coming, but Salter keeps pushing through. Neither a hurricane nor his own body can prevent this one from happening. He has remained resilient through it all, too. Salter, a jiu-jitsu black belt and a former NAIA national wrestling champion, is not afraid of anyone. The fight against Lovato will be his chance to showcase his skills and earn a title shot.

“I think it’s going to be interesting to see how it plays out,” Salter said. “Neither one of us is scared to stand and strike, and neither one of us is scared to be on the ground. I think that’s one of the things that’s going to be different for him. He’s never had anybody that’s as confident to be on the ground with him. I can put him on his back. I can hold him down. I can punch him. And, he’s not going to throw up submissions and catch me, because I’ve been there so much. Even though he has fought some good grapplers, he’s never fought anyone that can wrestle like I can, who also has a high level of jiu-jitsu.

“I think this is going to be the ‘Fight of the Night.’ If you’re a jiu-jitsu guy and you like jiu-jitsu, you’re getting two guys that have been to the ADCC World Championships against each other, and if you like to just see people beat each other up, neither one of us [is] afraid to stand and throw. I think it’s going to be the best of both worlds.”

On Friday night, Bellator 205 kicks off from the Centurylink Arena in Boise. Salter and Lovato serve as the co-main event. Salter has gotten used to facing the occasional storm, and this is just one more he’ll have to weather as he vies for a shot at Bellator gold.