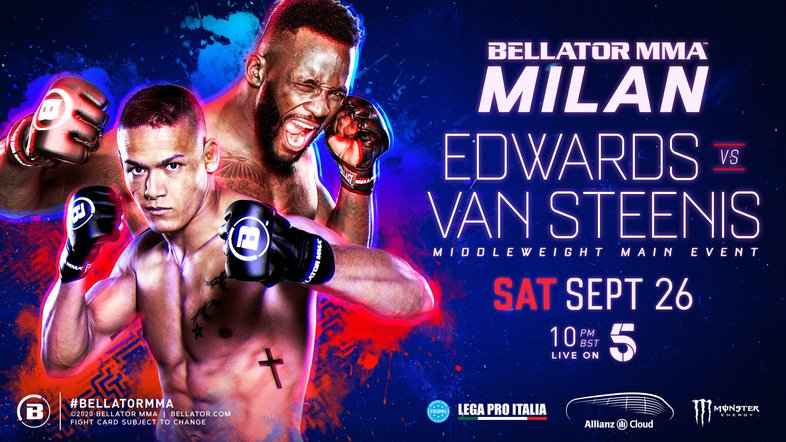 Costello van Steenis, who is aptly nicknamed “The Spaniard,” has never succumbed to the matador in his career. His recent loss, which was handed to him by former UFC fighter John Salter at Bellator 233 in November, came on the scorecards, as did his first pro setback. In that brawl, the 28-year-old Netherlands native sprinted to the center of the cage to begin the opening round and later met Salter’s punches on the ground by using his head as a sledgehammer to showcase his fearlessness in unconventional fashion.

Since his inception to the professional ranks in 2014, when he had the privilege of fighting in front of his hometown crowd in the last event ever hosted by Hoyer’s Productions Battle of the South, he has never been finished by an opponent. However, his upcoming test is unlike any other. He will be up against an undefeated prospect in Fabian Edwards. After a brief one-year stint with England’s BAMMA organization, Edwards returned to Bellator, where he has put everyone on notice.

From a flying knee finish of Rafal Cejrowski in 2017 to his knockout of Brazilian Jiu-Jitsu black belt Falco Neto with a flurry of up kicks that mirrored a snake injecting venom to its prey, Edwards can get the job done in a variety of ways that makes it seem like he’s from Mortal Kombat, with the ominous but familiar voice bellowing the “FINISH HIM!” retort accompanying his every move. His days as an amateur allowed him to transition smoothly into his professional career, and he has won 19 straight bouts since his arrival in 2015.

Kent Kauppinen, Edwards’ former BAMMA 34 opponent, will also be featured on the same night at Bellator’s Euro Series 8 show. Kauppinen’s fight against Will Fleury will serve as the main-card opener.

Allianz Cloud in Milan, Italy, serves as the backdrop for the next three events for the promotion, beginning on Saturday, Sept. 26, with Euro Series 8. The 1:30 p.m. ET prelims and the 5 p.m. ET main card will stream live on the Bellator MMA mobile app.

The Milan headliner pits Fabian Edwards, who is unblemished through nine fights total and five in Bellator, against Costello van Steenis. Will Edwards continue his perfect run, or can van Steenis, who most recently lost to John Salter, score a rebound win at the Brit’s expense?

Fellow middleweight Michael Shipman fought both of these men in back-to-back fights within a two-month span in 2019, resulting in his current two-fight skid after winning 12 of his first 13 bouts. While van Steenis had the more profound victory on paper with a second-round knockout against Shipman, Edwards went three full rounds en route to a razor-thin split decision. This recent test proved to not be a cakewalk for the 6-foot-1 Englishman, but he went through a lot of adversity in those three rounds, which will come in handy against van Steenis.

While domination through brute force can create momentum, racking up rounds against quality competition builds confidence and increases fight IQ. Edwards has fought in 10 out of a possible 12 rounds through his last four contests. It also helps that he trains with Leon Edwards, a current UFC fighter that also happens to be his brother. As the old adage of “iron sharpens iron” goes, the winning mentality and attitude has proven to impact both fighters, as Leon is currently the No. 3 welterweight in the UFC and Fabian is poised to climb up to middleweight title contention after having won all five of his fights in Bellator.

As seen in his fight with the southpaw Salter, van Steenis has the tendency of letting adrenaline get the best of him. This leads to a stand-up barrage that takes a hit at his stamina more than his opponent in scrambles. If van Steenis is going to come out of this against Edwards unscathed, he is going to need to be more composed throughout the fight. While Edwards’ grappling game isn’t as polished as that of Salter, it would be a smart business decision for van Steenis to keep the fight on the feet as much as possible.

Two additional middleweight contests round out the main card. In the first of these match-ups, Will Fleury clashes with Kent Kauppinen. In the other, Mike Shipman battles Pietro Penini. Which one of these men will make the biggest impression on Saturday?

Shipman will have to find a win against Penini in any fashion to stay on track. After losing his first professional fight at Ultimate Challenge MMA 34 in 2013, Shipman was perfect through 13 fights over the next five years before experiencing the longest losing streak in his career over his last two outings. Shipman seems like the favorite heading into this fight, which will be Penini’s second appearance with Bellator since he was signed in 2019. The 27-year-old Penini has established himself as a threat in Italy, but he is just beginning his legacy in North America.

Therefore, Kauppinen will be the man that will make the biggest impression on Saturday. One may discredit his ability just by looking at his record, but he seems hungry to prove doubters wrong again. After dropping consecutive fights by submission to Fabian Edwards and Walter Gahadza respectively in 2018, he pressed the reset button and focused on a boxing career that saw him fight 19 times in two years. The result of becoming a boxing padawan has transformed his striking ability. His power punches have led him to have a 75 percent knockout rate in his 12 wins.

Kaupinnen’s return to MMA in 2019 did not go as planned. He dropped a fight by unanimous decision to former K-1 kickboxer and Strikeforce fighter Melvin Manhoef at Bellator 221. This proved to be a short-lived downfall, though. He submitted Andy Manzolo with a forearm choke three minutes into the first round and used his light footedness to land power leg kicks that prompted Manzolo to limp and change stances.

What one prospect off the prelims deserves the most attention from fans?

Cory Tait. He fights Frans Mlambo, who comes from a very talent-rich gym in SGB Ireland, where Conor McGregor and Johnny Walker are trained by coach John Kavanagh. Tait, meanwhile, comes from a Blackzillians squad that boasts fighters like Eddie Alvarez and Rashad Evans under the supervision of head coach Henri Hooft.

Tait captured UCMMA’s bantamweight and featherweight championship belts in 2012 and 2011 respectively before arriving at Cage Warriors to challenge for the league’s then-vacant bantamweight strap against Toni Tauru at Cage Warriors 72. Tait has fought at 145 pounds in the past, but 135 seems to be his ideal weight. He has exclusively fought in the bantamweight division for his last 10 fights.

Heading into Bellator 240 fight week, Mlambo said that a win against Ricky Bandejas should warrant him title talk. Mlambo’s elusiveness served him well, as he moved his head out from the centerline to present a tougher target and even knocked down Bandejas with a three-punch combo to close the gap with 1:52 left in the first round. Down on the scorecards and with the momentum on Mlambo’s side with a counter right after the break, Bandejas took matters into his own hands and decided to spoil “The Black Mamba’s” ambitions in the middle frame. As Mlambo was focused on catching and pinning Bandejas’ leg on a roundhouse kick, he made himself susceptible by letting down his guard to his chin, which was subject to a pair of right hook shots that ended his night.

This tilt will not go the distance.

Two English countrymen are lined up against each other when Akonne Wanliss takes on Alfie Davis. In what is seemingly matchmaking heaven, Wanliss carries a four-fight winning streak, while the 28-year-old Davis has won three in a row.

Davis has never lost a fight via stoppage through 16 appearances. This bout against Wanliss will be his second fight at 155 under the Bellator banner, after two of his last three contests were at a catchweight — 160 against Alexandro Botti and 165 versus Daniele Scatizzi.

The primary thing that will be apparent on fight night will be the height and reach discrepancy. Davis has an six-inch reach advantage and is taller than Wanliss by two inches. It remains to be seen how Wanliss will approach this fight because of this disparity in size. Does he want to keep it a short-range fight?

The unpredictability and intrigue should be a reason why fans might be pleasantly surprised or severely disappointed. That’s what I call a win-win.