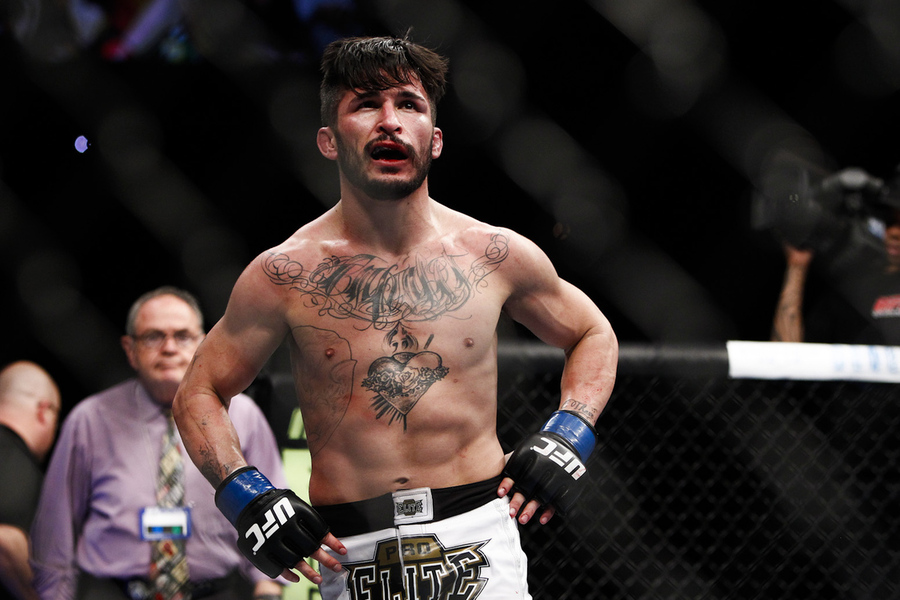 Flying Under the Radar: Ian McCall vs. John Lineker Is the Most Important Fight of the Week

With 47 events on its 2014 calendar, the UFC has left fans with plenty of action to satiate their appetite for fights this year. Rare has been a weekend that has gone by without some offering from the world’s top MMA promotion. In fact, the UFC has put together so many cards that on four occasions this year there have been two UFC events on the same day. This weekend, with events in Sydney, Australia, and Uberlandia, Brazil, the UFC presents its fifth such doubleheader (sixth if you count the July 5-6 events), and there are quite a few noteworthy fights that will be part of it.

Of course, the most talked-about contest this weekend will be the middleweight main event at UFC Fight Night 55 between Luke Rockhold and Michael Bisping. Rockhold is a former Strikeforce champion who has finished his last two opponents and is ranked fifth among 185-pounders by the UFC. His crushing loss to Vitor Belfort is the only thing keeping him from being a title contender right now. Ninth-ranked Bisping, meanwhile, has had a much longer tenure in the Octagon than his opponent, but has alternated wins and losses over his last seven fights. A win for the Brit would mean a likely place in the middleweight top five and maintained relevance among fans. If Rockhold is successful, he could find himself fighting for the strap sooner rather than later, or at least in a No. 1 contender’s fight with Ronaldo “Jacare” Souza.

Friday’s co-main event features Ross Pearson, a man who has gone 3-1 (with a no-contest) since returning to lightweight in late 2012—with the loss being an extremely controversial split decision that went in favor of Diego Sanchez in June. Pearson came back just two months later and stopped longtime lightweight contender Gray Maynard in the second round. Pearson will look to crack the 155-pound division’s elite rankings with a win over Al Iaquinta, owner of a respectable 4-2 UFC record who last defeated Rodrigo Damm in September. Certainly not a bad fight for the co-main event of a Fight Pass card.

Then, on Saturday, legendary light heavyweight Mauricio “Shogun” Rua will face a late replacement in Ovince St. Preux in the main event of UFC Fight Night 56. After losing the light heavyweight title to Jon Jones in March 2011, Shogun has gone just 3-4 in competition, dropping his last fight to Dan Henderson in March. He’ll look to return to vintage form against 10th-ranked St. Preux, who saw his five-fight winning streak snapped in August when he lost to Ryan Bader. If OSP is successful on Saturday, his victory over Rua would represent the first “big name” that OSP has bested in his professional career and would certainly improve his chances at title contention.

While all three of these fights certainly have their appeal and the results will no doubt have significant consequences for their participants, none of these fights could be considered the most important fight taking place this weekend. Instead, the fight with the greatest significance will take place in the UFC’s smallest men’s division.

In the co-main event of UFC Fight Night 56, third-ranked flyweight Ian McCall takes on John Lineker in what should absolutely be considered a No. 1 contender’s fight for the next shot at Demetrious Johnson’s belt. Aside from being an outstanding match-up, the stakes for this fight are among the highest for any non-title bout this year.

McCall was one of the UFC’s “original four” flyweights, participating in a two-round tournament with Johnson, Joseph Benavidez and Yasuhiro Urushitani to determine the promotion’s first 125-pound champion. McCall would fight Johnson to a majority in the semifinals before losing to “Mighty Mouse” in the follow-up three months later. Johnson would, of course, go on to become champion, while McCall lost his next fight to Benavidez. McCall has had more success of late, going 2-0 in his last pair of fights and most recently defeating Brad Pickett in July.

Despite debuting in the UFC after McCall and his three fellow tournament participants, Lineker actually has two more fights in the Octagon than “Uncle Creepy,” and three more wins. Of course, the knock on Lineker has been his repeated inability to make weight, as he’s failed to meet the flyweight limit on three separate occasions during his UFC tenure. The Brazilian didn’t make it a fourth for either of his two UFC fights in 2014, but the loss to Ali Bagautinov in February certainly set him back. That said, Lineker both made weight and defeated Alptekin Ozkilic in his last fight, scoring his fourth UFC win by TKO.

This flyweight co-main event should be “win-and-you’re-in” for a number of reasons, but the main one is that Johnson has pretty much cleaned out the rest of the UFC’s flyweight division. McCall is riding a two-fight undefeated streak and came closer to defeating Mighty Mouse than any of the champion’s other flyweight opponents. Because of McCall’s ranking and the fact that he hasn’t fought Johnson in more than two years, he could fairly be given the Chad Mendes treatment of getting another fight against his division’s dominant champion after so much time, particularly if he scores his third straight win on Saturday. Lineker is one of just two fighters in the UFC’s top eight to never have faced Johnson (fourth-ranked Jussier “Formiga” da Silva is the other). If Lineker can make weight and top McCall, that’d give him six UFC flyweight wins, which should give him the edge over Formiga (three UFC wins) for title consideration. (In addition, Formiga fights John Dodson in December, and a loss would eliminate him from consideration completely.)

Now, whether either of the two flyweights fighting in Brazil on Saturday could actually take Johnson’s belt remains in serious doubt, just due to the skills the champion has displayed thus far in his reign. Even still, the UFC has smartly paired McCall and Lineker in this title eliminator simply due to the fact that the result positions the winner perfectly for a fight with the champ. McCall’s previous experience against Johnson and recent successes justify his spot here, as do Lineker’s five UFC wins and the fact that he hasn’t before fought Johnson. This might not be the most hyped fight taking place this weekend, but it is without a doubt the most important.