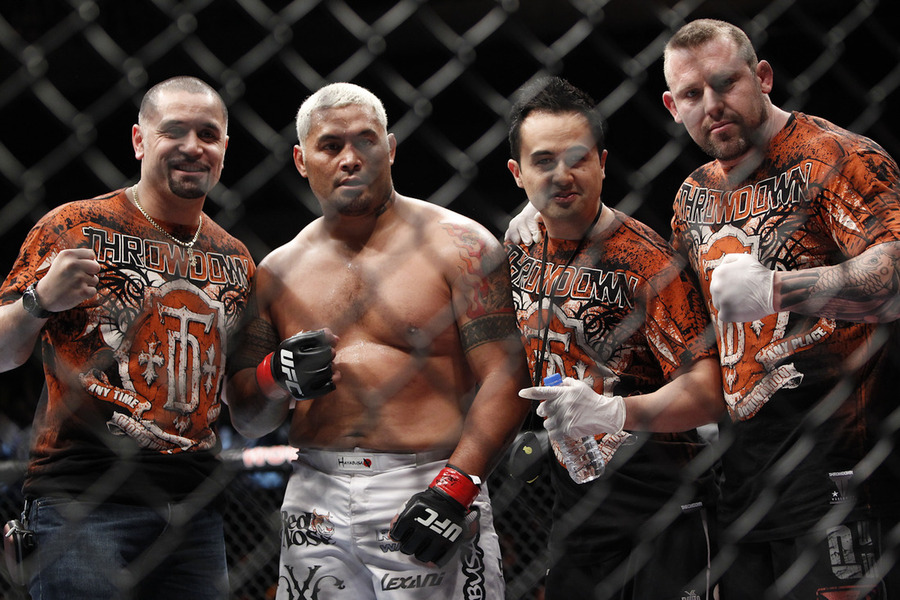 If you count yourself among the large group of MMA fans who determines whether or not to purchase a UFC pay-per-view on a card-by-card basis, Combat Press has you covered. Before each of the UFC’s pay-per-view events, we’ll review the main-card fights and surrounding circumstances before determining whether you should buy it yourself or save your money for beer and pizza and check it out at your local sports bar. This week, we’ll tackle UFC 180, taking place Nov. 15 from Mexico City.

If I was tasked with writing this column a month ago, the conclusion would have been a resounding “Buy It.” In UFC 180’s originally scheduled main event, heavyweight champion Cain Velasquez was slated to return from a layoff of more than a year to defend his belt against red-hot top contender Fabricio Werdum. That fight alone was so in-demand by the Mexican fans that UFC 180 sold out Arena Ciudad de Mexico in less than a day. Throw in a very attractive lightweight contest between Diego Sanchez and Joe Lauzon with the other scheduled bouts and UFC 180 was looking like a great pay-per-view offering.

Unfortunately, things didn’t quite work out as planned, as Velasquez, Sanchez and Lauzon would subsequently withdraw from their respective fights with injuries, throwing a serious wrench into the UFC’s hype machine. Instead, the UFC tabbed iron-chinned, brick-fisted fan-favorite Mark Hunt to replace Velasquez and take on Werdum for an interim heavyweight championship. The co-main event features former welterweight title contender Jake Ellenberger fighting to defend his spot in the top 10 from up-and-comer Kelvin Gastelum, while the main card’s third fight is a gem of a featherweight contest between recent title challenger Ricardo Lamas and seventh-ranked Dennis Bermudez. Rounding out the night’s pay-per-view portion are a couple of fights that each feature an impressive Mexican prospect looking to make a mark in front of his countrymen.

I’m guessing the UFC basically offered to back up the proverbial Brinks truck to fourth-ranked Mark Hunt’s house to entice the 40-year-old weight-limit-maximizing kickboxer to return to action after less than two months to fight at altitude on somewhat short notice against the division’s No. 1 contender. I’m sure Werdum is getting a decent payday as well, but the simple fact is that no Mark Hunt might have meant no pay-per-view. Velasquez’s withdrawal left the UFC with precious few options to salvage this card. As decent a fight as Ellenberger/Gastelum is for the main card, there’s no way it could have carried a pay-per-view, so the UFC either had to find a suitable, pay-per-view-worthy replacement for Velasquez or a suitable, pay-per-view-worthy replacement main-event fight. The options available to execute the former were pretty sparse. Junior dos Santos (ranked second in the division), has a date with Stipe Miocic (No. 5) in the main event of UFC on Fox 13. Travis Browne (No. 3) lost his most recent fight to Werdum and Josh Barnett (No. 6) lost his most recent fight to Browne, so unless the UFC wanted to try to promote UFC 180: Werdum vs. Andrei Arlovski (ranked seventh), Hunt was literally the only viable option left that wouldn’t force the UFC to inherently weaken a different card by attempting to move one of its fights to UFC 180.

Fortunately for the company (and for fans), Hunt agreed to take the fight. He is, of course, a significant underdog due to Werdum’s recent streak of impressive performances—Werdum is 4-0 since returning to the UFC in 2012—but Hunt’s place as perhaps the hardest puncher in the UFC always gives him an opportunity to steal a victory. Werdum no doubt is aware of Hunt’s considerable striking abilities and will therefore be looking to take this fight to the mat as quickly as possible. Hunt’s Achilles’ Heel over the years has been his submission defense, and Werdum is one of the more decorated grapplers in the UFC’s heavyweight division. Still, wanting to get Hunt to the ground and actually accomplishing it without getting clipped with a sledgehammer in the process are two very different things, so despite the relatively uneven odds (Hunt is +325 to Werdum’s -450 on Bovada.lv), this fight has quite a bit of intrigue to it.

Immediately preceding the main event is a welterweight bout between seventh-ranked Jake Ellenberger and undefeated young gun Kelvin Gastelum. It’s not often that a fight so neatly fits into a classic sports storyline, but this is certainly one of them. Ellenberger has occupied a top spot in the UFC’s welterweight division for quite some time, compiling an 8-4 UFC record that includes a stretch in which he scored six straight victories. Ellenberger would still be part of the title conversation at 170 pounds had he not dropped his last two fights to top contenders Robbie Lawler and Rory MacDonald, so the fight on Saturday will be Ellenberger’s last opportunity to remain among the elites of the division.

Hoping to usurp the veteran Ellenberger is the 23-year-old Gastelum. The Arizona-based fighter burst onto the UFC scene with an impressive run through The Ultimate Fighter 17 middleweight bracket en route to winning that season’s title. Gastelum immediately dropped to welterweight and has won all three of his subsequent fights. Despite earning judges’ decisions in each of his last two contests, Gastelum first drew fans’ attention due to his demonstrated ability to stop fights. He’s won six of nine inside the distance in his pro career, and he finished three of his four “unofficial” opponents during his time in the TUF house. The only mark on Gastelum’s record is a botched weight cut before his last fight that caused him to weigh in at 172.75 pounds. He’d go on to win the fight, but the UFC will not tolerate fighters missing weight, especially in its more crowded divisions, so Gastelum will have to be adequately prepared even before stepping into the Octagon on Saturday to prove he belongs in the top 10. This is absolutely a fight pitting youth and raw talent (Gastelum) against experience and honed technique (Ellenberger), and it should be a good one.

The fight I’m actually most excited for is the featherweight contest taking place in the middle of the pay-per-view portion of UFC 180. Since losing his official UFC debut to Diego Brandao in December 2011, Dennis Bermudez has rattled off seven straight wins in the featherweight division. During that streak, Bermudez collected four post-fight awards, including in each of his last two fights (which were both stoppage victories). Most recently, Bermudez became just the fourth man to finish Clay Guida in Guida’s 20-fight UFC career. A win on Saturday would certainly position him well for a shot at Jose Aldo’s belt.

Ricardo Lamas had put together his own four-fight winning streak before losing his fight against Aldo in February. He rebounded with a win over Hacran Dias in June and now might be the last thing standing between Bermudez and a title shot. Lamas is correctly ranked in the UFC’s featherweight top five, having previously taken out the second-ranked Cub Swanson and former contender Erik Koch inside the distance, to go along with his other three UFC victories. His lone UFC loss is to the champion, so Lamas’s only real task is to win enough times to get another shot at the belt. A win on Saturday night keeps him in the title conversation, and probably means a future date against either Chad Mendes or perhaps the loser of Swanson/Frankie Edgar (presuming the winner of their fight would get the shot at Aldo). Lots on the line here.

Beyond that, though, the UFC 180 pay-per-view card starts to get pretty weak. Understanding the desire to promote the pay-per-view card by placing exciting and potentially meaningful fights on the free preliminary portion, there’s simply no way the women’s bantamweight bout between Jessica Eye and Leslie Smith should be absent from the main card. Eye is positioned sixth among the UFC’s female 135ers and is the most highly ranked fighter outside of Cat Zingano not to have faced champion Ronda Rousey. She’ll certainly have a tough test in front of her in the 13th-ranked Smith, who has claimed four of her seven victories by knockout or TKO.

Instead, the first two fights on the pay-per-view main card of UFC 180 feature four fighters with a combined ZERO wins in the UFC. To open the card, welterweight Augusto Montano makes his UFC debut against Chris Heatherly. Montano is 13-1, with all 13 wins coming by stoppage. He’ll look to continue his current four-fight winning streak against Heatherly, who lost his UFC debut to Ben Saunders in August. Next on the card is another welterweight fight between Edgar Garcia and Hector Urbina. Of the four fighters in the first two main-card contests on Saturday, Garcia has the most UFC experience. Unfortunately, that experience came in the form of two straight losses in 2009. He’s rebounded nicely since, though, going 7-1 and winning his last four straight. Urbina has had less consistent success recently, going 2-2 in his last four, but does make his UFC debut on the heels of a June win.

It’s the inclusion of this second fight—Garcia vs. Urbina—that really tips the scales for me, particularly because it’s being included on the pay-per-view card in place of the much more appealing Eye vs. Smith contest. I get that the UFC wants to adequately showcase talented Mexican prospects in its first trip to the country, but surely the women’s bantamweight contest could have taken the spot of one of these two prospect bouts. Montano/Heatherly at least sort of makes sense (at least for a pay-per-view opener) given Montano’s impressive record and Heatherly’s prior recent UFC exposure, but there’s really no place for Garcia/Urbina on a card that will cost $55 to buy, especially when there’s a great fight between two women’s bantamweight contenders that absolutely belongs on the main card.

This one is actually kind of tough to call. We do have three pretty compelling fights at the top of the pay-per-view card, but the two that remain are far from worthy of their spot. If Velasquez was still in the mix on Saturday, the importance of his fight with Werdum would almost have made UFC 180 a must-buy, especially if Sanchez/Lauzon was also still on the card. Neither of those factors are in place, though, so I’d recommend directing your money elsewhere this weekend.