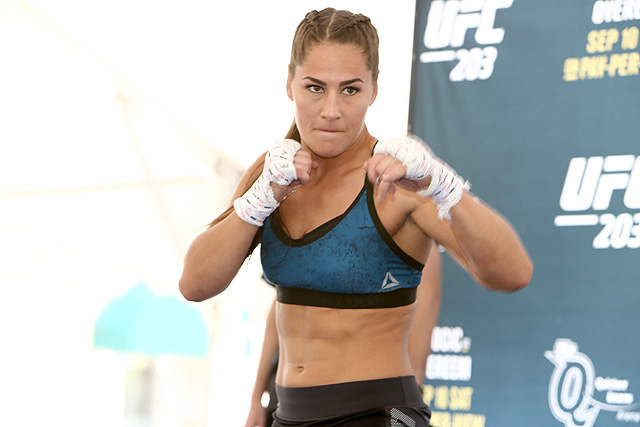 Frightful Five: Why Jessica Eye is a Dangerous Fight for Jessica-Rose Clark

Jessica-Rose “Jessy Jess” Clark is experiencing something of a resurgence. After a rather unspectacular run as a bantamweight, Jess dropped down to enter the UFC’S newly minted women’s flyweight division. She quickly reeled off two high-profile wins. The first was over middling strawweight-turned-flyweight Bec Rawlings in the co-headliner of UFC Fight Night 121. The second victory came against the UFC’s poster girl, Paige VanZant, on the main card of UFC Fight Night 124.

These two wins have firmly inserted Jess as the leader in the clubhouse when any talk of title fights is brought up. This brings us to UFC Fight Night 132, which takes place on June 23 in Singapore. Jess steps into the Octagon against Jessica Eye.

Eye is a flyweight-turned-bantamweight-turned-flyweight looking for an opportunity to restart her career. She is actually ranked below Jess, so a win over Eye really doesn’t improve the Australian’s ranking.

Eye is perfect through one fight since moving to the flyweight division, but she won just one of her previous six outings, and her most recent win was far from scintillating or decisive. Meanwhile, Jess had a coming-out party in her fight with Rawlings, essentially dominating a fighter who was thought to be of a level comparable to her. She then built off of the win with another one-sided showing against VanZant.

In strictly a business sense, this fight isn’t a good move for Jess. It’s a step backward as far as ranking and the overall view of her opponent as an elite fighter. Second, and more importantly, it’s a tougher fight than her previous two bouts against an opponent who has underperformed on the UFC platform numerous times.

Eye won her last fight in a workmanlike fashion and is only 2-5 over her last seven contests. If Jess loses to Eye, then, in the eyes of the promotion and in the rankings, it bumps Jess out of any sort of contender talk for her next two or three fights. On the other hand, a win for Eye bolsters her standing in the view of the public, the promotion and in the rankings, while a loss wouldn’t do her any real harm in perception or ranking.

Eye is an experienced fighter who presents the toughest match-up Jess has faced in the UFC. She has nothing to lose and everything to gain in a fight that will play a big role in the shape of the division in the near future. Let’s ask Ben Rothwell how that worked for him when he fought Junior dos Santos, or Heather Hardy and Emily Ducote when they took fights with Kristina Williams.

Jess debuted as a featherweight and won two titles in regional promotions as a bantamweight before dropping to flyweight. As a flyweight, she has had decided advantages in size, strength, physicality and durability over her last two fights.

Jess’s first foe, Rawlings, is an unathletic, educated brawler who has some skills on the feet and the ground, but she leans heavily on physicality, durability, violent exchanges and size to win the majority of her fights. She can box, is effective — though not technical — in the clinch, and can grapple and wrestle. However, a lot of what she does is bolstered by her physical advantages in size and strength. Rawlings enjoyed no such advantages against Jess, which put the spotlight on Rawlings’ ability to defend and counter in striking, wrestling and grappling ranges.

A similar issue came up when Jess met VanZant at UFC Fight Night 124. PVZ has often leaned heavily on athleticism, physicality, volume and pace to determine fights. She has skills in the scrambles, clinches and with her ground-and-pound, but these skills are greatly enhanced by physical attributes. In a fight against a much bigger, more durable, physical and physically stronger opponent, the impact of her physical tools was lessened and the spotlight was on her technical and strategic tools.

None of this applies to Jess’s upcoming fight with Eye, who is also coming down in weight and has routinely fought some of the biggest, strongest, most physical fighters at bantamweight. Eye has shared a cage with the likes of Leslie Smith, Sara McMann, Bethe Correia, Julianna Peña and Sara Kaufman. Eye was able to navigate those advantages against fighters with better all-around skill sets, grappling and athleticism. Jess will not be able to bully or easily control Eye in the same manner as she did against Rawlings and VanZant.

Jess had size advantages that neutralized her two most recent opponents, essentially making those fights a matter of skill. Both opponents were flawed technicians who had a hard time getting to or staying in the range and positions they needed to be effective.

This was apparent on the feet, where neither fighter was able to effectively escape or counter Jess’s pressure, volume or variety of attacks. Neither fighter’s footwork, setups, entries, exits and volume was up to par, making it hard for them to have any prolonged or noteworthy success on the feet.

The most obvious gap in skills, though, came when the fights had any sort of prolonged exchange of grappling. In almost each and every instance, Jess was able to essentially neutralize Rawlings and VanZant. She either countered their attacks to keep them from compounding on any success they had, or she was able to get in favorable positions.

Unfortunately, these advantages won’t exist or be as pronounced for Jess against Eye.

Much like Holly Holm, Eye works the outside through a combination of active and technical footwork. She uses side steps, circling, slides and pivots to create and maintain distance. These same things allow her to get clean exits when an opponent pressures her, ties her up in grappling exchanges or attempts to overwhelm her with their offense.

Much like Irene Aldana, Eye’s calling card is volume. She has a boxing-heavy game in which she utilizes a busy jab and a long right hand. Eye has solid striking awareness and acumen in the clinch, where she uses slick knees and uppercuts off the collar tie.

Eye is competent on the ground defensively, in grappling exchanges on the feet, and in her takedown defense. This is in large part due to her footwork, movement and volume striking. At 125 pounds, Eye’s power should be more noticeable, if not elite. It will garner much more respect than it did at bantamweight, which in turn will allow her to back opponents up with her volume much more effectively and create space for clean exits if and when an opponent tries to press or overwhelm her.

At a smaller weight, Eye’s takedown defense and ability to get back up or win in standing grappling exchanges should be much improved as a result of facing girls her size or smaller. She was able to have success in clinches and on the ground with some of the more physical and athletic fighters in the bantamweight division — the aforementioned Correia, Peña and Kaufman, as well as Miesha Tate — based on skill alone, so fighting much smaller and less-accomplished fighters should be easier. Eye won’t be outgunned physically, which in turn makes her skills in grappling exchanges that much more of a factor. Furthermore, all these women Eye had success against in grappling exchanges are far superior to Jess in physical measurables and applicable skill.

In fighting Eye, Jess is taking on an opponent who has suffered many losses at bantamweight, but also an opponent who was losing to mostly high-ranked and elite opposition. McMann is a former title challenger. So, too, are Correia and Davis. Peña is a winner of The Ultimate Fighter and a top-three bantamweight. Tate is a former Strikeforce and UFC bantamweight champion. Even a win turned that was overturned to a no-contest came against Kaufman, a former Strikeforce and current Invicta champion. Eye has faced a better caliber of opponent than Jess.

At the highest levels of the sport, Eye has been competitive. At the third tier of the sport, Jess has struggled to match that same feat. This lends some credence to the idea that Eye is the more balanced, experienced and skilled fighter. If you give Eye the opponents Jess has faced, then Eye might emerge undefeated. If you give Jess the opponents Eye has met, then the Aussie might not even have an important win at either bantamweight or flyweight.

Jess wasn’t a very dynamic bantamweight. She isn’t a very dynamic flyweight, either. Fortunately for her, Rawlings was equally unathletic and faced a strength disadvantage, and she didn’t have enough skill or fight IQ to navigate those things. VanZant is an immensely gifted athlete, but she, too, didn’t have the skills or fight IQ to maximize the advantages she had in explosiveness, agility, mobility and activity.

In contrast, Eye can grapple, wrestle and strike. She is comparable to Jess in size, strength and durability. Eye and Jess are on equal footing, more or less, but Eye has faster hands and feet, plus more mobility, agility and explosiveness.

None of this means that Jess shouldn’t take the fight. A win for Jess, while not awe inspiring, would be her third in a row in the division, and it would come against an opponent with name value. That being said, there are inherent risks in every fight. This fight has even more risks than usual. The UFC women’s flyweight division is still in its infancy, and it is ripe with opportunity. Every win is magnified, but so is every loss. Jess has a legitimate place in the contender conversation, but a loss to an opponent, especially one ranked lower than her, puts an end to this.