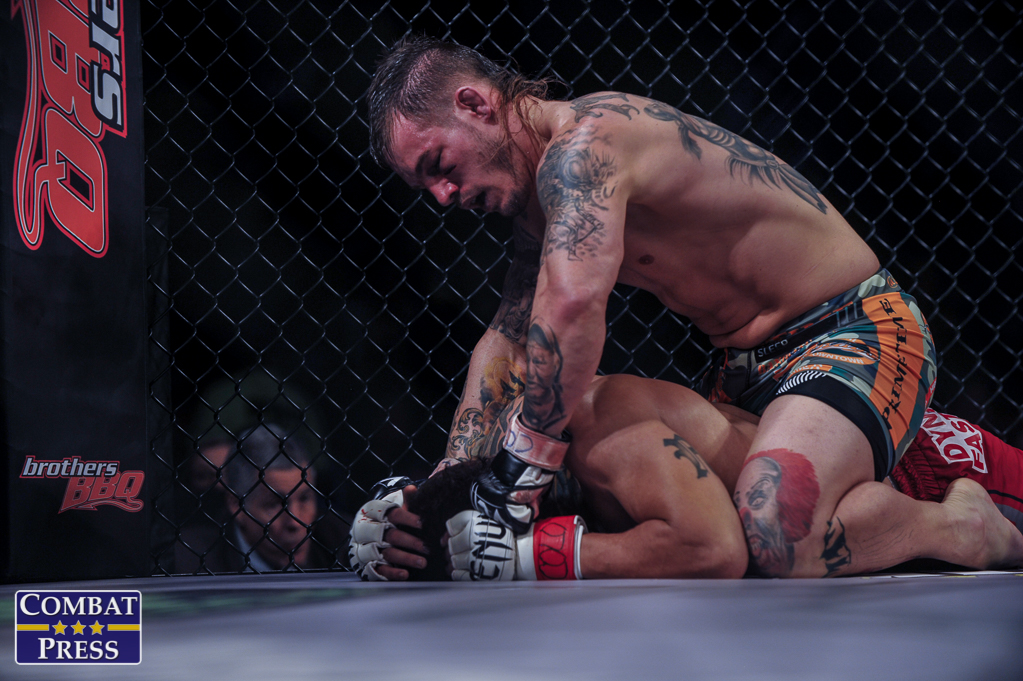 Rage in the Cage hasn’t often appeared in this feature, but the 52nd event’s headliner is definitely worthy of some attention. The bout pits undefeated prospect Marcus Sanchez against Legacy Fighting Championship veteran Evan Cutts in welterweight action.

The 27-year-old Sanchez has been putting away opponents with relative ease since making his pro debut in 2013. He has six finishes via strikes and two submissions. Only one of his rivals has made it beyond the first round, and he’s stopped four of his opponents in under a minute. He was just as effective as an amateur, too, with an undefeated mark through four fights with three stoppages by way of strikes and one submission finish. The Oklahoma-based fighter has also ventured into the professional boxing ring, where he has gone undefeated through six pro bouts with two knockouts and two technical knockouts.

Cutts, 26, is a solid veteran, but his prospect tag has faded since the early days of his career when he was an undefeated up-and-comer. After winning his first five fights, including one bout under the Legacy banner, Cutts stumbled against Sean Spencer, who punched his ticket to the UFC with a decision nod over Cutts at Legacy FC 13. His misfortunes continued when he was decisioned by Colton Smith, marking Smith’s first post-UFC victory. Cutts, who has been fighting on smaller shows since 2015, has won two of his last three. Both of those victories came by choke submission, upping his career total to six choke-submission finishes.

These men have very different styles. Sanchez, a boxer, busts out of the gates looking for the early kill on the feet. Cutts, a grappler, wants to get his opponent down and attack with submissions, primarily focusing on his opponent’s neck. Cutts has never been finished, but he’s never really faced an opponent with the stopping power that Sanchez packs.

Sanchez has faced some decent competition already, but Cutts still marks a significant jump up for the prospect. If Cutts can survive the early onslaught, he’ll create some major headaches for Sanchez on the mat. Cutts has gone the distance against UFC-caliber talent like Spencer and Smith, albeit in defeat. The Texan fighter will provide us with a gauge of just how good Sanchez really is. Unfortunately for Cutts, he might not like the answer to that question. Sanchez could be the first man to finish Cutts.

The Absolute Championship Berkut organization continues to serve up solid fight cards with regular frequency while also snatching up international talent, including plenty of American fighters. Take Adam Townsend, for example. The 28-year-old has moved on from regular appearances with the Resurrection Fighting Alliance and its successor, the Legacy Fighting Alliance, to sign with ACB. Now, the Tennessee-based fighter makes his promotional debut as a lightweight and takes on Russian prospect Alexandr Shabliy.

Townsend found plenty of success as an amateur before turning pro in 2012. He won his first four pro contests before running into Frankie Perez under the Ring of Combat banner and suffering a unanimous decision loss. Townsend alternated wins and losses for his next four fights before finding his groove and rattling off eight wins. Two of his victories, both coming in the RFA cage, were decision nods over UFC veterans Yuri Villefort and Ryan Roberts. “Prime Time” stumbled again when he faced UFC veteran Ernest Chavez, but the loss came via split decision. Townsend, who has nine wins via submission, recently added to his knockout total with a streak of three straight finishes via strikes. The streak included wins over UFC veteran Júnior Assunção and Titan FC vet Marcus Edwards. He has had trouble picking a weight class. He has fought several times at 145 or 150 pounds, but he’s also gone as high as middleweight. Townsend checked in extremely heavy for a featherweight contest and missed weight twice for lightweight contests, which spurred the move up to 185 pounds. He has gradually stepped back down in weight to return to the 155-pound division.

The 24-year-old Shabliy has been fighting as a professional since 2010. He finished his first four opponents before suffering a loss to veteran competitor Mamour Fall. Another four stoppage wins followed and then he endured another defeat, this time at the hands of veteran Arsen Ubaiulaev. Shabliy turned around to avenge that loss in his very next fight. He added another six consecutive victories, all of which came by finish, before dropping his most recent outing to Eduard Vartanyan. Overall, he has eight wins by some form of knockout and seven submission wins. He has been submitted once and dropped two split decisions. Despite a trio of losses on his record, Shabliy has been the more consistent fighter. He is a strong finisher who has dispatched 13 of his opponents in the first round.

ACB continues its habit of booking intriguing match-ups for its events. Townsend has put together a strong resume, but Shabliy projects to be an even tougher opponent than the aforementioned Edwards. Both fighters are beasts at the opening bell, which could lead to a quick finish.

Townsend’s inconsistencies are still bothersome. He can claim victories over Edwards and Assunção, but he couldn’t get past Chavez. Shabliy, however, has struggled against fighters he should have handled without issue. The Russian lacks a true signature win and has faced a number of far outgunned opponents. Townsend won’t be quite so forgiving against Shabliy. Townsend has been on a knockout rampage lately, but this one might end in a submission win for the American fighter.

Nine fights into his pro career, bantamweight competitor Manny Bermudez remains undefeated. He’s done much of his work under the Cage Titans banner, and he’ll return for the promotion’s 34th event. Bermudez is set to face another stiff test in the form of veteran competitor Joe Pearson in a 140-pound catchweight contest.

Bermudez went 7-1 as an amateur, suffering a submission loss to Grant Mosley in only his second fight. His amateur career launched in 2012, and Bermudez has only been fighting professionally since 2015. As a pro, he has finished seven of his nine opponents within the first round. He went the distance to defeat formerly undefeated fighter Dan Dubuque and recently went to the scorecards in a notable split decision nod over Bellator and World Series of Fighting veteran Saul Almeida. Most recently, Bermudez registered a first-round armbar finish of Tony Gravely. The South Shore Sportfighting export also holds a first-round submission win over Jeff Anderson, the same Anderson that went three rounds with Almeida. Bermudez, who submitted his opponent in all seven of his amateur wins, is a certified finisher. His seven first-round finishes as a pro are joined by four first-round finishes as an ammy.

The 39-year-old Pearson is a grizzled veteran competing out of the Miletich camp. “The Triangular Strangler” debuted in 2002, making him a 15-year pro. Along the way, Pearson has made stops in the Shooto, Pride, WEC, Pancrase and Legacy Fighting Championship organizations. The Iowa native has struggled to find success, however. Pearson was 43-17-1 before hitting a rocky patch in recent years that has resulted in a 2-14 stretch. Pearson has suffered losses to notables Hatsu Hioki, Miguel Torres, Urijah Faber, Erik Koch, Raphael Assunção, Chico Camus, Daniel Straus, Masanori Kanehara and Mirsad Bektic. Meanwhile, his most noteworthy win came against Yoshiro Maeda. Pearson, who has now been stopped in eight straight fights, has an amazing 41 submission victories, but he has also suffered 17 submission losses and 13 knockout defeats. Amazingly, outside of a draw in his very first pro fight, Pearson has either finished his opponent or been finished in every one of his fights.

Pearson is a seasoned veteran, but his eight-fight skid, which extends to mid-2015, makes him seem like a step down from recent Bermudez opponents like Almeida and Gravely. Bermudez has a knack for finishing fights in quick fashion, and Pearson just doesn’t seem up to the task of fending off Bermudez’s attacks. Pearson will make an excellent addition to Bermudez’s resume of submission finishes.