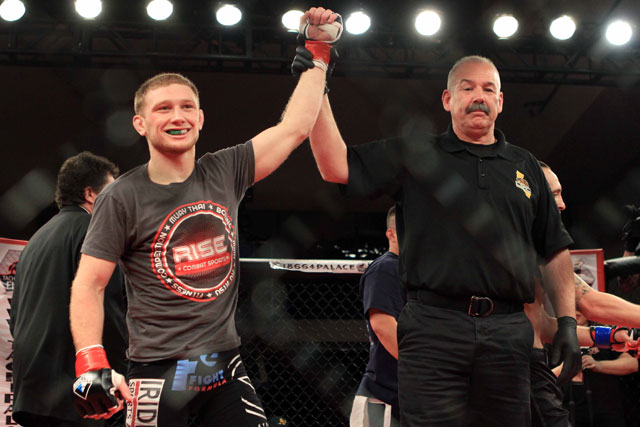 Legacy Fighting Alliance flyweight champion Maikel Perez may be out of LFA 53, but this doesn’t mean there won’t be a 125-pound title fight atop the lineup. With Perez out, the organization has opted to create an interim championship. The organization will pit Perez’s scheduled challenger, Casey Kenney, against late replacement Brandon Royval for the belt.

After an undefeated run as an amateur that included a Tuff-N-Uff title win, Kenney made the leap to the pro ranks in late 2014. The 27-year-old Arizona resident made a successful debut with a submission of Elijah Muhammad and then edged Paul Amaro on the scorecards. In late 2015, the Rise Combat Sports export joined the Tachi Palace Fights roster and turned in four consecutive stoppage victories, the last of which garnered him the Tachi flyweight crown. The Indiana native, who has a background in wrestling and judo, next competed on Dana White’s Tuesday Night Contender Series, where he claimed a unanimous decision over Cee Jay Hamilton. His performance wasn’t enough to earn a UFC contract, but it did get him an invite to compete again on the Contender Series just over a month later. Kenney finally stumbled in that encounter when he lost a close decision to Adam Antolin. He moved on to the LFA, where he has already earned two decision wins.

The 26-year-old Royval has a rather modest record, but he has certainly earned his place across from Kenney in this match-up. The Factory X Muay Thai disciple debuted in 2012 and only won two of his first three fights. His fourth pro outing, which took place in 2016, came in the World Series of Fighting cage and ended in a first-round knockout of Danny Mainus. The “Raw Dawg” faced a setback in his next bout under the Combate Americas banner when he dropped a decision to Ricky Palacios. Royval added two submission wins, including an armbar finish of Rakan Adwan in his LFA debut, before suffering a split-decision loss to Nick Urso at LFA 10. He has since recovered to the tune of three straight wins.

Royval is an excellent substitution following Perez’s withdrawal. While he’s arguably a step down from Perez, he’s no slouch, especially in a grappling affair. However, he will have his work cut out for him against Kenney, whose only loss came to an established regional champion and The Ultimate Fighter 24 alum who got past UFC veteran Damacio Page on the reality series and went the distance against Hiromasa Ogikubo before he was eliminated. Kenney can also boast notable victories over the likes of the aforementioned Hamilton, Alvin Cacdac and Roman Salazar, plus a split draw against The Ultimate Fighter: Brazil 4 alum Bruno Silva.

Royval has had some exceptional victories of his own, most notably the knockout of Mainus, but he simply can’t compare resumes with Kinney. Royval has lost some close decisions, and he has preyed primarily on up-and-coming talent rather than established regional veterans. Kenney’s wrestling and judo will negate a good portion of the threat from Royval, leaving him with only explosiveness to get the job done. Kenney might turn in a more workmanlike performance, but he should emerge with the judges’ nod.

The Absolute Championship Berkut promotion puts us in a tough spot. The organization’s homophobic owner, Mairbek Khasiev, leaves a dark cloud over the company and makes it ethically difficult for any respectable website to wholeheartedly endorse the promotion via coverage. However, it’s difficult to ignore the talent that ACB has amassed, and tough to punish fighters who are out there just trying to earn a living. The promotion’s 90th show is no exception. While we’re disgusted by Khasiev’s beliefs and actions, we are also intrigued by a number of the prospects who have the misfortune of working under his employ. This includes featherweights Rasul Mirzaev and Gleristone Santos.

Mirzaev has been tearing through the Russian regional scene since 2009. By his sophomore effort, “The Black Tiger” was fighting in the Fight Nights Global organization. While he jumped around to other companies, he always returned to FNG. This led to a 17-0 mark by 2016. The 32-year-old tallied a quick stoppage victory over future UFC fighter Masanori Kanehara early in his career and has gone on to add notable wins over Kevin Croom and UFC/WEC veteran Diego Nunes. Mirzaev finally stumbled when he met UFC veteran Levan Makashvili in late 2016. Of course, Mirzaev has had far more struggles outside of the MMA arena than in it. He served a prison sentence for manslaughter after an altercation led to the death of a 19-year-old who hit his head on the concrete after being punched by Mirzaev. More recently, Mirzaev was shot, beaten and strangled on New Year’s 2017. The up-and-comer has not fought since the incident.

Santos has had his share of ups and downs through a 43-fight professional career. The Brazilian debuted in 2005 and streaked out to a 12-0 start. He hit a rough patch in 2008-09 when he lost back-to-back fights to Rivanio Aranha and current Bellator featherweight champion Patricio “Pitbull” Freire. Santos rebounded with another two victories, including one in which he avenged his prior loss to Aranha, but he then fell victim to a submission from a veteran opponent, João Paulo Rodrigues, he had already twice defeated. Again, Santos, who has since joined the Pitbull Brothers camp, recovered. He added yet another win over Aranha to kick off an eight-fight winning streak. Santos suffered a submission loss to WEC veteran and future UFC fighter Carlo Prater, but it was a small bump before he added an additional nine wins to his record. During this latter streak, Santos was able to outperform the likes of rising prospect João Luis Nogueira and UFC vet Alvin Robinson. He has fallen on hard times in recent years, though. The 30-year-old has won just three of his last eight fights. Most notably, Santos has suffered losses to John “Macapá” Teixeira and Brent Primus under the Bellator banner and Ali Bagov in the ACB cage.

Santos stands as a formidable, albeit beatable, opponent for the returning Mirzaev. The Russian fighter has a lot of ring rust to shake off, though. He’s not coming back from a simple injury either, but a devastating shooting and beating. There’s a chance that the psychological impact of that incident could haunt Mirzaev as he attempts to regain his prior form.

Despite a lengthy career in which he’s notched several notable wins, Santos isn’t a top featherweight at this point. His three recent wins came against an opponent who had lost two of his prior three fights before meeting Santos, a foe who is now on a three-fight skid, and an adversary who was coming off another loss when he tangled with the Brazilian. Meanwhile, Santos was also the last win for a guy who is now on a two-fight skid. Mirzaev isn’t getting a softball here, but the troubled Russian brings nine knockout wins into a contest against a veteran who has been finished with strikes in his last three losses. Mirzaev should regain some confidence with a finish in this fight.

The women’s atomweight ranks are somewhat depleted. Several of the fighters on the fringe of the top 15 have been in a constant round robin of wins and losses against each other, while rarely topping those ranked above them. This is why King of the Cage’s atomweight title showdown between champion Jayme Hinshaw and challenger Katie Saull is important. The division needs a fresh injection of talent, and this fight could provide the weight class with a new rising name.

Of course, that rising name most likely belongs to Hinshaw. The diminutive FIT-NHB fighter out of Albuquerque, N.M., picked up three first-round submission wins as an amateur before dropping her final ammy fight at Resurrection Fighting Alliance’s 32nd show. She made her pro debut in late 2016 with a loss to rising star Alesha Zappitella. It was the beginning of a very rocky road for Hinshaw, who won her next fight against Melissa Karagianis before dropping back-to-back bouts to Bi Nguyen and Cassie Robb. Then, it all clicked for Hinshaw. The “ATOMBOMB” claimed a decision win over Kelly Vilarino and then submitted Karagianis a second time to claim the KOTC atomweight strap. The 29-year-old has since defended the crown, while also avenging a prior loss to the aforementioned Nguyen. Nguyen, who earned a split verdict in the pair’s first contest, fell victim to a rear-naked choke in the rematch.

Saull hails from Canada and trains out of the Winnipeg Academy of Mixed Martial Arts. The 31-year-old had a similarly rough start to her pro career as that of her upcoming opponent. Her debut came in early 2017, when she dropped a decision to the aforementioned Nguyen. Saull made her KOTC debut the same year, but suffered a knockout loss to Lindsey VanZandt. The Canadian upstart has found more success in her three most recent outings, all of which came under the KOTC banner. First, she submitted Vilarino, the same opponent that took Hinshaw the distance. Then, Saull decisioned Andy Nguyen and the aforementioned Robb.

Hinshaw might enter this bout as a slight favorite, but Saull is certainly in the mix to pick up a statement win of her own here. They’ve had a couple of shared opponents, and Saull fared better in those contests. She submitted Vilarino, whereas Hinshaw went the distance. Saull also beat Robb, whereas Hinshaw suffered a knockout loss.

These fighters both have deceptively mediocre career marks. They’ve each turned in solid performances recently to record three-fight winning streaks. Furthermore, they both come from underrated camps that have produced other solid prospects. This should be a fairly even fight that goes the distance while showcasing the heart of both participants. It’s a tough call, but Saull might have what it takes to pick up a sneaky win.