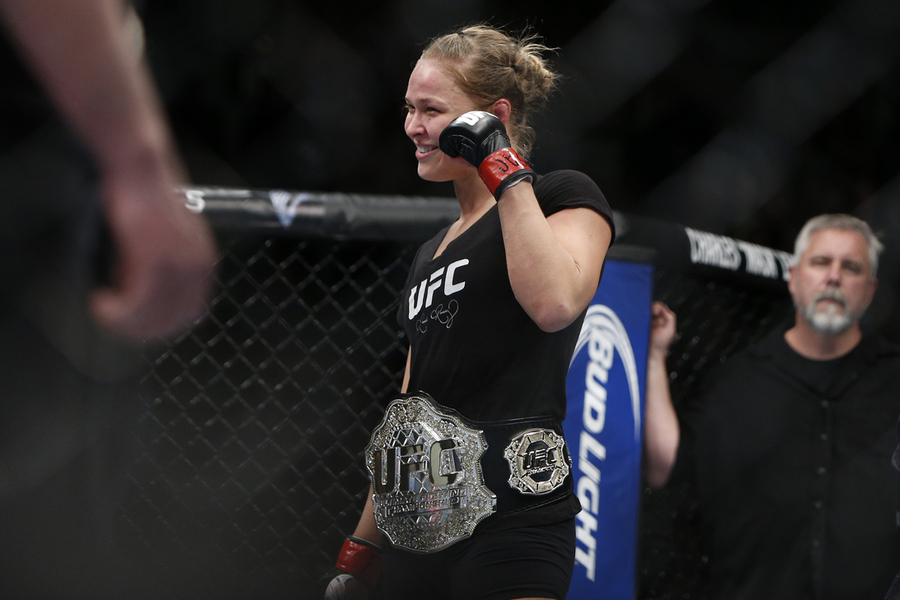 As we approach the end of another year, we tend to take notice of the health of things. Our bodies, for one. Our finances too. And when it comes to sports and entertainment, the health of professional organizations. In mixed martial arts, the pulse of the sport can be felt in the success of the UFC. If the UFC does well, the trickle-down effect to all the other organizations is overwhelmingly positive.

Most would say the UFC is doing well but could be doing much better. The organization doesn’t really have a clear-cut face of the UFC. Sure, Ronda Rousey has been carrying the headlines for most of the year, but who is the must-watch fighter inside the Octagon? Jon Jones? Well, he is considered by many to be the best fighter in the world, but the lack of mainstream marketing for the light heavyweight champion is preventing him from being recognized as a star at the worldwide level.

It would do the UFC a service to scale back its events a bit in 2015, but that’s not going to happen. The UFC announced it will be putting on at least 45 shows, with 13 airing on pay-per-view. The high number of events allows a steady stream of revenue to flow through the organization, but with slightly over half of the shows (10 Fight Pass events, in addition to the aforementioned pay-per-views) on a platform that cost most consumers extra, it doesn’t allow fans the ability to watch the majority of the fights without opening up their wallets. In order to watch all the UFC has to offer, it would cost roughly $850 a year. That’s not even including attending an event in person. For the die-hard fans, there can’t be enough fights or ways to watch them, but for others, it’s simply too much.

Perhaps things are going so well for the UFC that we’re nitpicking. If its biggest problem is giving fans too many fights to watch, that’s a sign that things must be going very well. One thing to watch closely in 2015 is how the company will re-brand The Ultimate Fighter series. The UFC’s signature show has no doubt struggled to maintain momentum over the past few seasons after the initial hype, and having to pull the show for a couple of weeks during the baseball playoffs this fall certainly didn’t help. UFC President Dana White has said that the show will return in 2015 after a major overhaul, but it remains to be seen if TUF is something that is still necessary to push the UFC’s product.

Competition is always good, even if organizations continue to pick up the leftovers of the UFC and promote those fighters in their headlining fights. There are good promotions all over North America, from the regional shows to the big ones we all recognize. As a sport, MMA is as healthy as it’s ever been heading into the new year—and that is a result of the trickle-down effect mentioned earlier. It’s consistent in other sports as well. The best organization garners the most attention, which fuels the fire for the younger athletes to get involved in the sport. There is so much talent ready to burst onto the scene from all over the world, and these up-and-coming fighters will only make MMA more exciting to watch. The UFC is a healthy beast, and the sport of MMA has never looked more promising than it does as it heads into 2015.