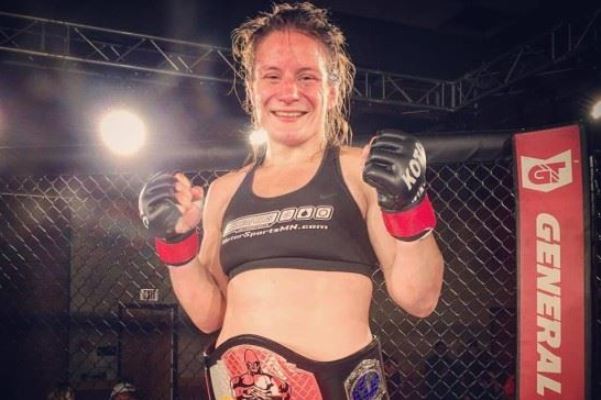 Grief is a relatively normal human experience. Through life, we tend to encounter adversity. For some, the impact can be debilitating.

Overwhelmed by grief and sadness, she let it get the best of her. However, months passed and she recognized “something needed to change.” At that point, Sorenson’s 5-foot-5 frame held approximately 210 pounds. This wasn’t the person she knew.

“I had always been super athletic,” said Sorenson. “I ran marathons, did cross-country skiing and played soccer and volleyball competitively in high school.”

After neglecting her athletic prowess, Sorenson looked to get back in the game. She came across a martial arts gym, The Cellar, which offered cardio kickboxing.

“I kind of stumbled into the gym I am still at now and kind of fell in love with it,” Sorenson explained.

She was enjoying workouts again, but it was the people that kept her coming back. Her newfound passion and camaraderie with her training partners helped Sorenson move through her grief.

“Everybody is super respectful,” she said. “They’re really friendly. I felt so welcomed when I came, and it helped so much, because I didn’t feel like an outsider.”

The welcoming arms of her coaches and teammates fueled her desire to return to the gym day after day.

“I wanted to go back,” said Sorenson. “I wanted to train two or three times a day, however often I could be there.”

Something was special about this gym. It wasn’t your average MMA gym. The Cellar, known for producing excellent Muay Thai practitioners, had a different feel for her.

“A lot of MMA gyms, you walk in and there’s a lot of ego,” she explained. “We [at The Cellar] come from a very traditional, respectful part of the martial arts, so it’s different.”

Her training created a transformation of body and mind.

“It’d been a crazy ride,” admitted Sorenson, who joined the gym nearly five years ago. “I ended up getting laid off from my regular job two years into my training and I struggled, but I made things work. I’ve been able to train full-time since.”

With everything falling into place, Sorenson was able to train and subsequently fight to her potential. Before competing in MMA, she had competed in Muay Thai and Brazilian Jiu-Jitsu, where she found frequent success.

In late 2013, Sorenson made her amateur MMA debut and fought to a draw. As an amateur, she went on to go 3-1 before deciding to fight professionally.

She made her professional debut with King of the Cage in November 2015 and found success on the judges’ scorecards. Since her debut, she has been a fixture with the Midwest branch of the promotion. In 2016, Sorenson fought for the coveted KOTC bantamweight title. She left no questions after earning a TKO victory over Canada’s Christina Barry. The win also garnered the attention of Invicta.

“I signed a four-fight, two-year contract with Invicta, so you should be seeing me in there a few times the next couple of years,” said Sorenson.

On Nov. 18, Sorenson makes her Invicta debut, something she only dreamed about as an amateur.

“When I first started MMA, Invicta was essentially the UFC for women, so I am super happy to be here. That was the ultimate goal,” she said.

“It’s business as usual. I know this is a step up in competition, so I’ve stepped up my training,” said Sorenson. “She always brings it. She’s got good stand-up, she’s got good jiu-jitsu, and it looks like she has decent wrestling. She tends to gas a little bit, so I’ll be looking to take advantage of that.

“There are some fights where she wants to stand and bang with the other person, and some other fights where she’s trying like crazy to get it to the ground, so I don’t know what to expect from her.”

Though Clark can be unpredictable, Sorenson is confident.

“I’m ready wherever,” she said. “I know she’s good everywhere, but I am better. When it comes to the middle of the second round [or] third round, she is tired every fight. I normally have cardio for days. That’s where I think I’m really going to outclass her.”

Sorenson’s confidence grows daily with the help of her team and coaches.

“We don’t have a big MMA team here, but we have a very close MMA team here,” Sorenson said. “If one of us has a fight, we kind of rally around that one person to help them get ready for a fight.”

Sorenson is part of one of the most high-profile of the women’s divisions, bantamweight.

“There’s so much shifting in that division, because they lose athletes to the UFC,” she said. “It’s hard to know where I stand.

“One fight can really shoot you up. I’ll start from the bottom and work my way up.

“I would be more than happy to compete with Invicta for however long, but now the ultimate goal is to get into the UFC and see what I can do there.”

Five years ago, grief set Sorenson on a path she couldn’t imagine. She continues to mourn the loss of her best friend, but she is now in a better place mentally and physically. Adversity is working in her favor.