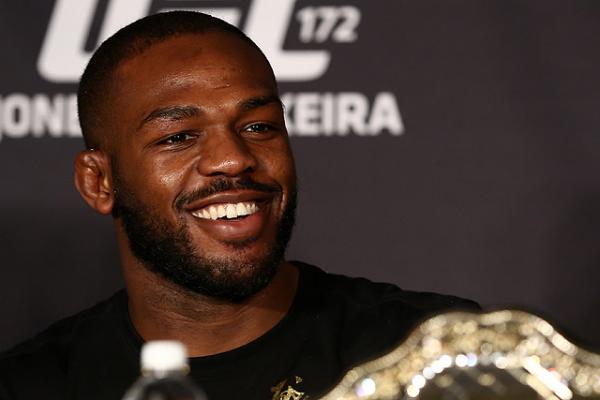 UFC 182: Nothing Left to Prove for Jon Jones at Light Heavyweight

Jon Jones is without a doubt the best MMA fighter on the planet today. After another dominant title defense against Daniel Cormier at UFC 182, Jones looked toward the future and defending his belt. However, the reigning champ shouldn’t just look forward to see where his career path should go. Instead, he also needs to look up, to the heavyweight division.

The UFC’s heavyweight class has been the center of criticism for years now. The division is stacked at the top with elite-level fighters, but look further down the mountain and you’ll find that it’s littered with fighters who are struggling to remain on the UFC’s payroll, let alone stay in the top 15. Depth has never been a strength of the division, but it’s a flaw that’s only been exacerbated by the dominance displayed by Cain Velasquez.

It’s a sentiment that extends to the light heavyweight division as well. Nearly all the top competitors have either already been beaten by Jones, or they are simply not on the same level as the champion. Two men — Alexander Gustafsson and Anthony “Rumble” Johnson — remain who can be advertised as legitimate challengers. But those two are set to square off later this month.

Gustafsson came the closest anyone has to beating Jones. He took the champion to a hard-fought decision at UFC 165. The fight was razor close, and many fans believed Gustafsson’s hand should’ve been raised. Meanwhile, Johnson has seen a career resurgence after being released from the promotion following a number of weight-cutting incidents. Now on an eight-fight winning streak, Johnson has skyrocketed up the rankings and is poised to finally realize the potential we’ve always seen within him.

But with the two men facing off in a title-eliminator bout, that leaves Jones with only one option moving forward for 2015. The loser of Gustafsson-Johnson is likely to need another high-profile fight, maybe even two, in order to climb back up the ladder. That effectively removes them from the 2015 fight year unless Jones wants to compete three times this year, something the champ has not done since 2011, the year in which he captured the crown.

There’s also a lack of fan interest in Jones facing the winner of the bout between Gustafsson and Johnson. Jones has already taken Gustafsson’s best shot and emerged victorious. Furthermore, the Jones that fought at UFC 165 is nowhere near the same Jones that fought at UFC 182. During the UFC broadcast and at the post-fight press conference, media members speculated that Jones didn’t train as seriously for Gustafsson as he should have, and we’ve heard similar assertions from Jones’s coaches in the UFC 182 preview videos. Regardless of whether or not you believe that particular rumor, nobody can ignore the fact that Jones has gotten a lot better since UFC 165.

Many analysts and fans believed Cormier would be the guy to finally bring Jones to his breaking point. Cormier had the striking power of a heavyweight combined with Olympic-level wrestling, a perfect blend of skills to defeat anyone. Well, almost anyone. Jones took some stiff shots from Cormier in their UFC 182 clash and kept coming forward. Then, in the championship rounds, Jones took away any semblance of Cormier’s will to win by out-wrestling the challenger. When Javier Mendez asked Cormier if this (meaning the UFC title) is what he wanted, Cormier could be heard saying, “I’m trying.” That’s the sound of a defeated man. While Cormier did manage a late surge to cap off the fight, it was clear that Jones was beginning to pull away as the fight wore on. Cormier himself admitted that he basically took the fourth round off, which is something you cannot do in a UFC title fight.

Think about that for a second. Jones outlasted a former Olympic athlete and undefeated fighter both physically and mentally. What more does he have to prove at light heavyweight?

Gustafsson already had his best shot and couldn’t seal the deal. So, that leaves Rumble.

Johnson makes for an intriguing fight given the surge he’s been on. He has explosive athleticism that may be unmatched by anyone in the upper echelon of the light heavyweight division, and he has dangerous knockout power and good wrestling to boot. He also wouldn’t be at much of a size disadvantage in both height, reach or size. But, does he bring anything new to the table that Jones hasn’t seen (and beaten) before? It’s an intriguing fight, but one that in which Jones is likely to be heavily favored.

With little intrigue moving forward at 205 pounds, Jones should be moving on to bigger and more challenging obstacles. The champ did say he “doesn’t want to talk about moving to heavyweight” after UFC 182, but he did leave the door open by saying he’d be willing to fight Velasquez in a heartbeat (for the right price, of course). Fabricio Werdum even threw his name into the hat of potential opponents for Jones at heavyweight, warning Jones to stay in his own division.

Jones obviously made weight fairly easily for UFC 182, taking to the scale with his pants on and even saying after the fight that he needed to eat more in order to keep weight on. However, when people are giving him accolades like this, what more can one do? Jones has already faced a litany of MMA legends, solved the puzzle of Lyoto Machida and out-fought a former Olympian. Simply put, if Jones wants to continue on his quest of being the best that ever lived, it’s time to move into the land of the big boys.

The timing couldn’t be more perfect for Jones to challenge for the UFC heavyweight title. Even if the UFC chooses to have Jones work through the rankings for a fight or two — a stupid business move, really — the list of heavyweights that would give Jones problems is very short. Jones wouldn’t enjoy as much of a size advantage over the heavyweights, but he would have the advantage in nearly every other area.

He’s only getting better, too. At age 27, Jones is still in his prime years as an athlete. His body is still young enough to handle the changing of weight classes without adversely affecting him, but his mind is seasoned enough for him to do things the right way.

However, Jones is likely to be put into a heavyweight clash with either Velasquez or Werdum (depending on who is champion) immediately upon making the change in weight classes. That fight has the potential to be the biggest bout in UFC history. Jones is a huge star entering the best years of his career, and Velasquez and Werdum each present their own unique wrinkle for Jones to try to foil. Velasquez is the ultimate pressure fighter with an unlimited gas tank, and Werdum has sharp Muay Thai striking to go along with the best jiu-jitsu in the heavyweight division. In an era with pay-per-view buys on the decline (not to mention a rising price tag for those pay-per-views), a fight between Jones and the UFC heavyweight champ has the prospect of making all parties involved a hell of a lot of money.

Jones wouldn’t be the first to hold a title in separate weight classes. He’s not the first to have an aura of invincibility surrounding him, either. Nor is he the only champ to achieve a record number of title defenses. However, he may have the ability and career sustainability to outshine all the legends before or after him.