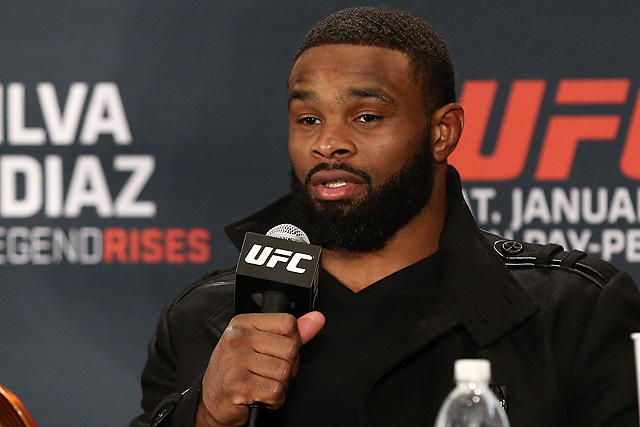 No More Rematches: Tyron Woodley Should Be Next for UFC Champ Robbie Lawler

On the first weekend of 2016, Robbie Lawler and Carlos Condit kicked off the new year with a war that may have stolen “Fight of the Year” honors before most of us had wrapped our heads around the recent turn of the calendar.

The UFC 195 main event was one of the most exciting and competitive fights in UFC championship history. For five rounds, Lawler attempted to hunt down a very active and precise Condit in order to land the huge, significant shots he’s become known for, all while trying to avoid a record-setting amount of strikes thrown his way by “The Natural Born Killer.” The pace was fast and furious, copious amounts of damage were done by both sides and, after 25 minutes, the judges gave one of the most hotly contested wins in recent memory to Lawler by way of split decision.

According to MMAdecisions.com, almost 80 percent of fans ended up giving the decision win to Condit on their scorecard, and if you look at the media tally, it’s pretty clear that the overwhelming majority of MMA writers thought the belt should have changed hands that night as well.

Normally in a situation like this, we’re looking at a massive amount of outrage from fight fans. Judges “screw up” all of the time, and when it happens in a high-profile fight like this one, usually the internet is flooded with cries of robbery and demands of an immediate rematch. For some reason, that didn’t happen here. Maybe it’s because the fight was so competitive and entertaining. Or maybe it’s just because people love Lawler. Regardless, the public outcry wasn’t half of what you’d expect from the passionate UFC fanbase. As a result, even though Condit was the winner in the eyes of well over half of the audience, it now appears “The Natural Born Killer” isn’t going to get the opportunity to prove them right.

Despite many fans feeling that Condit should have automatically been able to walk into an immediate rematch with the champion, it’s tough to make that call without addressing the elephant in the room. That elephant is Tyron Woodley.

Woodley has been on the cusp of a welterweight title shot for over a year now. With a 4-1 resume in his last five bouts, including a win over Condit, it’s becoming increasingly difficult to deny “T-Wood” his title opportunity. He’s coming off back-to-back wins over contender hopefuls Dong Hyun Kim and Kelvin Gastelum, making Woodley arguably the hottest top-ranked welterweight outside of the champion. However, Woodley constantly seems to be the forgotten man at 170 pounds.

With all of the talk usually focusing on Lawler, Condit, Johny Hendricks and Rory MacDonald, Woodley tends to end up on the outside looking in, even when he’s obviously the better choice for a high-profile fight. In fact, while there’s no denying that fight fans were calling for a Lawler-Condit bout due to how exciting it was guaranteed to be, it’s hard to come up with a valid reason why Condit was offered the bout instead of Woodley.

Not only does Woodley have a TKO win, albeit due to injury, over Condit in his back pocket, but his recent wins over Kim and Gastelum, both of whom were in the welterweight top 10 at the time when Woodley defeated them, held a lot more weight than Condit’s single-fight winning streak against Thiago Alves. Based on both head-to-head results and resume, Woodley had the stronger case for a title shot. However, when the UFC decided to give the people what they wanted instead of abiding by the rankings system, Woodley was left out in the cold.

The way things sit now, it’s actually more difficult to choose the next contender for Lawler’s belt than it was last time. Woodley was the obvious candidate to fight Lawler in January, but the UFC decided to dance around him and give Condit the title shot. In doing so, the company accidentally made its next decision that much harder to make. Woodley’s case for a title fight hasn’t changed over the past year and in theory he should be next in line, but Condit, by winning the fight against Lawler in the eyes of most fans, improved his case tenfold for another title shot.

Now, the UFC finds itself in a tough situation. Not only do the fans want to see a rematch between Lawler and Condit take place, but Condit has made it pretty clear that he’s willing to go as far as retirement if he doesn’t get a fight with Lawler next. Meanwhile, Woodley has been patiently waiting for over a year now for his crack at gold. Even with how close Condit came to upsetting Lawler earlier this year, Woodley’s overall resume is far better. Woodley deserves the shot, and it seems that he might just receive it this time around.

The UFC did right by its fans when it gave Condit the shot at UFC 195. But whether or not you feel the judges’ verdict was justified, Condit didn’t get the job done. Now it’s time for the company to do right by the fighters. This means giving Woodley a much deserved chance at winning the title.

Too often we’ve seen “promised” UFC title shots disappear into nothing in favor of a more marketable match-up. Woodley has done his time waiting in the wings and has seen too many opportunities pass him by over the past 12 months to not be rewarded with the next shot at gold. The fans might want a Condit rematch, Condit and Lawler might want the rematch and even the UFC might feel it’s the better fight, but at this point Woodley deserves his opportunity. It would be a shame if he was once again on the outside looking in.