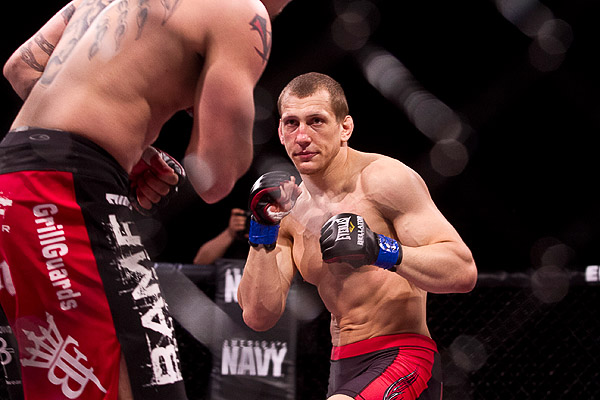 The UFC has been mining Russia for talent in recent years, but M-1 Global is the big dog in the area, and the promotion has managed to hold on to some very successful fighters. Vyacheslav Vasilevsky is one of the league’s crown jewels. The longtime M-1 staple is set to defend his middleweight title at M-1 Challenge 56. The challenger will be Ramazan Emmev, a fighter Vasilevsky has already defeated on one occasion.

Vasilevsky’s first win over Emeev came in September 2014 and garnered the 28-fight veteran the middleweight gold that previously rested around the waist of Emeev. Vasilevsky is best known to American fans for his appearances in Bellator’s season-six middleweight tournament, where he defeated Victor O’Donnell and suffered a loss to Maiquel Falcao. The loss to Falcao was Vasilevsky’s first since a 2008 loss to Daniel Tabera in his second pro outing. The 26-year-old has since avenged the loss to Falcao with a 37-second TKO finish of the UFC veteran. The former M-1 light heavyweight champion has also claimed wins over the likes of Trevor Prangley and Vitor Nobrega. The Red Fury Fight Team and Tiger Muay Thai product is a highly accomplished sambo practitioner who holds the rank of First Razryad Grand Master in combat sambo. He also holds a black belt in judo and a purple belt in Brazilian Jiu-Jitsu.

Emeev struggled out of the gates and posted a 3-2 mark in his first five fights. However, things started to click after that, and he won his next eight fights, including two consecutive title bouts against UFC veteran Mario Miranda, before running into Vasilevsky. Emeev succumbed to strikes in the fourth round against Vasilevsky, but he’ll get his chance for redemption this weekend. Emeev is a well-rounded fighter who has posted two wins via strikes and five victories by way of submission.

This fight shouldn’t vary much from their first encounter. The two battled into the championship rounds in that affair, and Vasilevsky’s superior striking won out. Emeev has plenty of potential, but he’s facing an opponent who has already stopped him once. Furthermore, Vasilevsky has a wealth of experience against quality opposition, and he’s won a number of those affairs.

Vasilevsky will continue to add to his current winning streak, but he’ll make quicker work of Emeev this time. The finish will once again come by way of TKO.

If you don’t succeed in the UFC, there’s always the hope of earning a second chance. And there’s no better route to that second chance than by fighting for a promotion that has established itself as a direct developmental league for the UFC. Enter Justin Lawrence and the Resurrection Fighting Alliance. After competing on The Ultimate Fighter: Live and going 1-2 in official UFC outings, Lawrence was released by the promotion and landed in the RFA, where he captured featherweight gold. Now, he returns to defend his title against undefeated challenger Sam Toomer.

Lawrence, whose early combat-sport accomplishments include multiple national kickboxing titles and two-time St. Louis Golden Gloves championship honors, entered the TUF 15 house as a young prospect with just three fights under his belt. He defeated Cristiano Marcello on the show before losing to Michael Chiesa. In his official Octagon appearances, he picked up a knockout win over John Cofer and suffered stoppage losses to Max Holloway and Daniel Pineda. The 24-year-old Black House fighter is undefeated through two RFA appearances.

Toomer trains out of another famous camp, The Arena. He played football before transitioning to a career in mixed martial arts. Toomer debuted in 2011 and made his way through the smaller Native Fighting Championship and Xplode Fight Series promotions, with an additional stop under the Gladiator Challenge banner, before making his RFA debut in 2014. He won the debut by disqualification when his opponent, Daniel Aguiar, refused to obey the referee’s commands to stand up. Toomer returned in December and tacked on another RFA win when he edged Altair Alencar on the scorecards for a majority decision. Toomer has three wins by TKO and three via submission.

Before entering the RFA cage, Toomer had faced a set of opponents who have combined for a current combined record of 7-47. Under the RFA banner, he managed a disqualification win — albeit in a fight he was en route to winning anyway — and eked out a majority verdict. Those contests came against a pair of foes who now hold a combined 17-8 mark. That’s a little better, but now he’s facing a Black House-trained striker who has UFC experience and has been fighting or training in some form since the age of six. That’s another big step up for Toomer, and it’s a step that may produce less than desirable results for the Californian.

Lawrence may not possess a spotless record, but his losses have come against credible opponents. Furthermore, he hasn’t stumbled once outside of the UFC and The Ultimate Fighter. Toomer is going to face an uphill battle here against a grinder who also has strong striking skills.

Lawrence won’t find the finish — he’s seen the scorecards in four of his six wins — but he will claim the judges’ nod.

In most sports, retirement is forever. Some athletes will attempt a comeback, but it’s a relatively infrequent occurrence. The opposite is true in MMA. High-profile mixed martial artists may call it quits, but they often end up finding it hard to resist an eventual return to competition. The light heavyweight headliner of Strength and Honor Championship 11 features one such fighter: Renato “Babalu” Sobral. Nearly two years after announcing his retirement, Sobral is back in action this weekend when he faces Volkan Oezdemir in Switzerland.

Babalu left his gloves in the Bellator cage in June 2013 after suffering a TKO loss to Jacob Noe. It was the Brazilian’s second loss in a row and fourth over his last six fights. Sobral has had a long career spanning stops in Rings, the UFC, Strikeforce, Affliction, ONE FC and Bellator. He challenged Chuck Liddell for the UFC light heavyweight title and enjoyed a stint as Strikeforce’s 205-pound champ. Sobral is known for his ground prowess — he has 19 submission wins — but he’s actually a quite well-rounded fighter who is a Master of Sport in wrestling and holds a black belt in Brazilian Jiu-Jitsu, a black belt in luta livre and a black prajied in Muay Thai. His experience, which includes cage time against some of the world’s best fighters, is tremendous, but the 39-year-old struggled to find wins in the tail end of his career prior to retirement.

Oezdemir is one of Switzerland’s brightest prospects, and he’ll enjoy the home-field advantage against Babalu. The 25-year-old arrived on the pro circuit in 2010 and reeled off 10 straight victories, including nine first-round stoppages. The final win in that stretch came in Oezdemir’s Bellator debut, but he didn’t fare so well in his sophomore outing with the promotion. He suffered his first loss against Kelly Anundson, who used the victory as a springboard to a light heavyweight tournament berth. Oezdemir returned to Switzerland and tacked on an 11th win — and another first-round finish — with a TKO stoppage of Paco Estevez. The Fight Move Academy product is a lethal finisher who has amassed nine wins by TKO and one via submission. His only loss came by way of submission.

Oezdemir’s string of quick stoppages may suggest someone who is capable of overwhelming Babalu, but that will only happen if the Swiss fighter is fortunate enough to connect on the button with an early strike or if Sobral’s retirement has caused him to really slip in the skills department. Oezdemir has feasted primarily on fighters with records hovering around the .500 mark. The only exceptions to the trend were a pair of inexperienced fighters who still have six or fewer fights on their resumes. Anundson exposed Oezdemir’s weaknesses against better competition. The prospect fought a very upright style against Anundson. He left his chin up and exposed, allowing Anundson, who isn’t known for his striking, to clip him with a few solid punches. While Oezdemir did flash some ability to stuff the takedown, it was short-lived. Within minutes, Anundson was ragdolling the young fighter around the cage and slamming him to the mat.

Anundson’s performance is something Sobral, a decorated wrestler, could easily duplicate. Oezdemir is the longer fighter — he’ll enjoy a four-inch reach advantage — but Babalu can simply close the distance and force his opponent to fend off takedowns and work from the clinch. Oezdemir simply isn’t up to snuff in those areas. The Swiss fighter will always have a puncher’s chance, and Sobral has been decimated by strikes in his seven most recent losses dating all the way back to 2002. If Oezdemir fails to land, however, it will be a long night of fighting to stay on his feet and avoid submissions.

Sobral’s wrestling and grappling should carry him to a submission victory in his comeback fight.