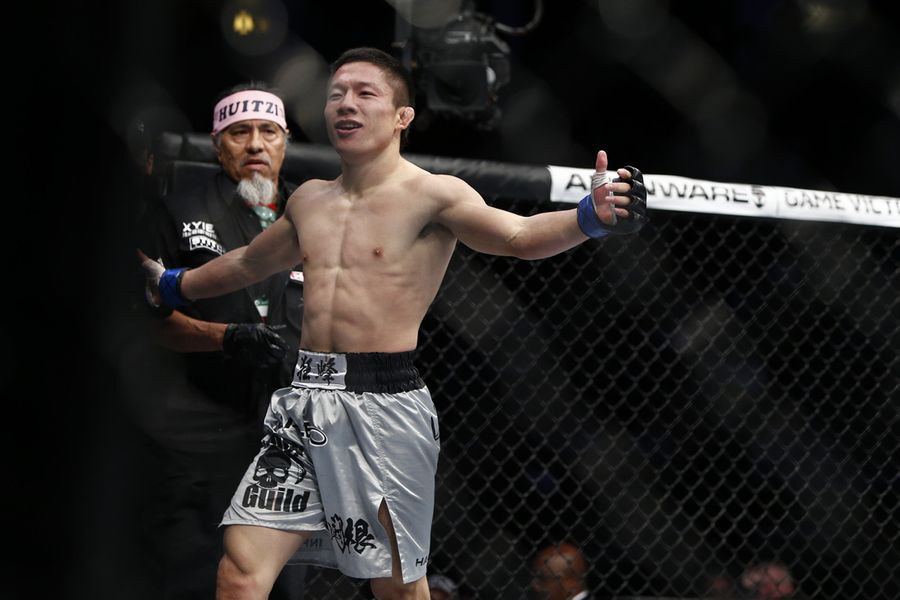 Canadian fight fans probably don’t want to hear this, and the ones that were preparing to buy tickets to see Rory MacDonald legitimize his title shot in Montreal will likely agree even less, but UFC 186 was given a major upgrade when MacDonald was bumped from the co-main event slot in favor of a flyweight title fight.

There was a lot to love about the original co-headliner featuring MacDonald in a title eliminator against Hector Lombard. MacDonald is far and away the most popular Canadian fighter in the world with Georges St-Pierre out of the picture, and it obviously would have been an added treat to see him compete in front of a partisan crowd in Montreal. Lombard is a legitimate title contender in his own right and had a good chance at inserting himself into a title fight of his own if he could defeat MacDonald. Sadly, a failed drug test for Lombard following a victory this January at UFC 182 has sent him to the sidelines for the foreseeable future. With no obvious opponent in sight for MacDonald, he’s been forced off the card as well.

We’ve seen about a dozen UFC main and co-main events already canceled in 2015, but in the case of UFC 186, this is one of the few times when the promotion was actually able to upgrade a card following a cancellation. The replacement fight between flyweight champion Demetrious Johnson and challenger Kyoji Horiguchi is obviously the more important of the two bouts since there’s a belt on the line, but it seems likely that the flyweights will also deliver a far better overall fight than their welterweight counterparts. As intriguing as MacDonald/Lombard seemed on paper, stylistically the two fighters might not make for the most exciting match-up.

Despite all of the hype he had when he first debuted in the Octagon, Lombard has been a disappointment in the majority of his half-dozen fights for the promotion, even in a couple of winning efforts. We’ve seen flashes of the aggressive destroyer that Lombard was while dominating the Bellator middleweight division, but the guy who entered the Octagon on a 25-fight winning streak hasn’t shown up nearly often enough for UFC fans to treat him like a must-see attraction.

Then there’s MacDonald. While he was consistently seen as one of the more exciting and watchable fighters in the UFC in his first few bouts in the Octagon, the last few years have been harder on “The Red King.” A lackluster win over Jake Ellenberger in a fight with major title implications drew the ire of UFC President Dana White, and following a closely contested fight with eventual champion Robbie Lawler, MacDonald put on two more dominant, yet light-on-action performances in his next two bouts. The Canadian contender got things back on track with an impressive TKO win over Tarec Saffiedine last fall, but MacDonald has been really inconsistent in his ability to put on a good show in his last few outings and a bout against a similarly reluctant Lombard had a good chance at severely underwhelming the pay-per-view crowd.

While the bar crowd may have a harder time warming up to the likes of Johnson and Horiguchi when compared to a physical specimen like Lombard, the odds are that two of the fastest fighters in the fastest division in the sport are at least going to put on a decent fight. “Mighty Mouse” may not get the recognition of some of the other top pound-for-pound fighters like Jon Jones, Ronda Rousey or even Jose Aldo, but he’s right on their level when it comes to being among the most dominant fighters in the sport. He has another chance to showcase that dominance against a very game Horiguchi. After finishing three of his last four opponents and pretty easily dispatching everyone the UFC has put in his way since earning the belt in 2012, Johnson has already put together a legacy that will be tough for his successor to match, and the UFC’s inaugural 125-pound champion has only been getting better.

Obviously, Horiguchi is going to be a massive underdog come fight day. He has a career defining test in front of him in “Mighty Mouse,” but he appears to be one of the few fighters in the division with the speed to try to slow down Johnson’s constant movement and attack. The Japanese flyweight completely overwhelmed a game Louis Gaudinot at UFC 182, showing off his impressive speed in spades en route to an easy decision win. For the most part, that’s how Horiguchi’s entire Octagon career has gone thus far. While he isn’t beating marquee names, or even ranked fighters for that matter, Horiguchi has been impressively moving his way up the division with a combination of speed and surprising power, and it’s earned him a huge opportunity in just his fifth career UFC bout.

The betting line for Johnson/Horiguchi is likely going to be something ridiculously lopsided, but that’s to be expected. Johnson hasn’t had a truly close fight since he won the belt against Joseph Benavidez back at UFC 152, and plenty of MMA fans couldn’t pick Horiguchi out of a lineup. Still, Johnson is one of the three or four best fighters on the planet, and in the same way fans didn’t want to miss a single Anderson Silva, GSP or B.J. Penn bout a few years back, “Mighty Mouse” is nearing that level. Horiguchi may not be a big name — or really even a name at all at the moment — but he has some interesting tools that he’s going to bring with him in the fight against Johnson.

Even if it becomes obvious within the opening few minutes that Horiguchi is far from ready for this opportunity, at the very least we’ll get to see one of the very best in the sport today putting on a clinic. Furthermore, if Horiguchi is more game than expected, his ability to throw combinations could provide fans with an extremely entertaining title fight and a nice new puzzle for “Mighty Mouse” to solve during his reign. While a fight between MacDonald and Lombard would have been a much closer contest on paper than the flyweight bout that has replaced it, a first-round beatdown of a win from Johnson would be far preferable to the staring contest that easily could have taken place between the welterweights. It may not have the drawing power and appeal that you would want out of most title fights, and losing MacDonald on a Canadian card is never a good thing, but in this case at least the UFC came out ahead with the flyweights and booked the better fight for this card.