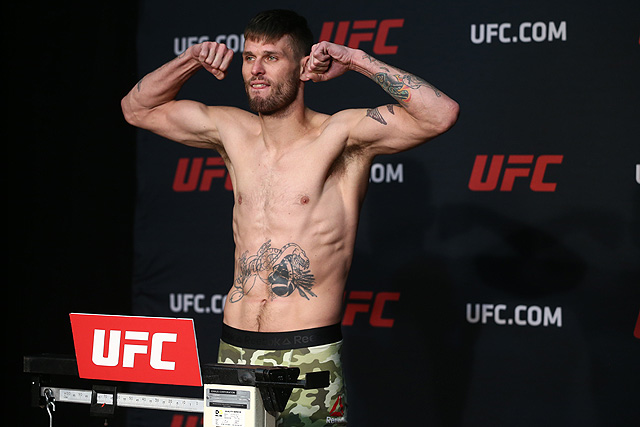 UFC Fight Night 106’s Tim Means: ‘It Should Be One Hell of a Fist Fight’

No matter what judgement someone tries to lay on him, “The Dirty Bird” is not that dirty. Sure, Alex Oliveira “succumbed” to some supposed illegal strikes, and, sure, the USADA laid a six-month suspension on him after he inadvertently took a tainted supplement. Yet, at the end of the day, UFC welterweight Tim Means is just a family man.

“I’m just happy to be fighting,” Means told Combat Press. “I could be fighting anybody and still be getting paid, so I’m just happy to get paid. I’m a happy camper right now. My bills are good, my family’s good, and as long as they’re good, I couldn’t care less about who I’m fighting.”

It’s good that Means doesn’t care who he fights, because on Saturday night at UFC Fight Night 106, he’s got a rematch against the aforementioned Oliveira.

In December, Means and Oliveira met at UFC 207 in Las Vegas. Only three and a half minutes into round one, Oliveira had one knee, and no hands, on the mat. The Brazilian was in a precarious position, and Means landed two knees to the head. Referee Dan Miragliotta paused the action, citing illegal strikes, and Oliveira was deemed unable to continue. The fight was called off, and a no-contest was rendered.

“I felt I was getting dialed in, and I felt like I was starting to beat Oliveira up,” Means said. “I saw him on a knee and hands up, so I didn’t think he was a defenseless fighter. In the rules meetings I’ve ever been in, they said the hand has to be on the ground, and you can’t be playing the hand-touch game. After reading that rule, it’s anything other than the two soles. The refs have done a good job of clouding up this area by talking about this hand, which doesn’t matter, unless you’re in the tripod position. I felt I was starting to win that fight convincingly.”

Some might say it really did not appear that Oliveira was that hurt, but that’s up to the doctors and the commission. The Brazilian was clearly in a bad place, and the stoppage ended a battle that appeared to be coming to an end anyway. This weekend, Means finally gets the chance to right what he felt was the wrong outcome, but he’s not sure who wanted this sequel more.

“He was talking about a rematch or whatever, but I thought he was just barking,” Means said. “There’s no way he doesn’t realize he was losing. I was beating him at the game he was supposed to be beating me in — wrestling. I think his manager did more talking than he did, so I’ll give his manager what he wants.”

Means is already a nasty fighter, but he usually keeps his emotions on a fairly even keel. Not only did the Oliveira outcome rub him the wrong way, but as the rematch approached, his cousin Marcus passed away. There’s a storm brewing in Means.

“I have a little bit of animosity,” Means said. “I do a good job of holding everything in and letting it out on fight night, so I’ve got a little bit more aggression coming. Fighting Oliveira in Brazil, I know I’ve got to be on my best game in his hometown. I love these fights where I need to be the guy coming in as the homecoming killer. I really relish in these fights — I love them — and I’m looking forward to this one.

“I like the fights where I’m backed into the corner and I need to fight my way out. Emotionally, it’s a good fight for me. He said he’s aggravated about the last outcome. I’m aggravated about the way he played it out, because after I watched the film, he stood up to protest the stoppage, but when he realized it was stopped, he fell over to play it out. I had my own little dent in that fight, where I could have easily not fought anymore, but I toughed it out because I wanted to get the job done. It shows me that he doesn’t really want to be there. He’s aggravated, and I am too, so it should be one hell of a fist fight.”

Oliveira may be next man set in front of Means, but the UFC welterweight division is super deep and serves as a much better place for Means than his previous home at lightweight. He’s 8-2-1 in the division, and he’s close to cracking the top 10. He doesn’t really care who is next in line, as long as he can put on a great fight.

“I think there’s a lot of killers in that division, and I think I’m in the right division to pick fights,” said Means. “There’s a lot of excellent, excellent athletes and good fighters in that division. With a statement here, I can hopefully get another cool fight. This is a cool fight here, even though he’s not a top-10 guy, but it’s a fun match-up. I think that’s what makes fights. Everyone wants a title shot, but at that same time, you’ve got to have some exciting fights on the card and make the fights be talked about. I think I do just that.”

Means is a great fighter, and it’s hard not to envision him in some high-profile fights in 2017. This is his chance to put a period on the Oliveira saga. The USADA ordeal is in the rearview mirror, too. Of course, he never loses sight of the real reason why he fights.

“Things are wild at home, man. It’s always a mixture of different types of characters, and it’s always a new game, man,” said Means. “It’s always a good time, and I’m having a fun time with responsibility, being a parent. It’s fun stuff, but it’s always challenging. At the same time, you love them, you want them to do good, and you want to see them smile. Life’s good.”