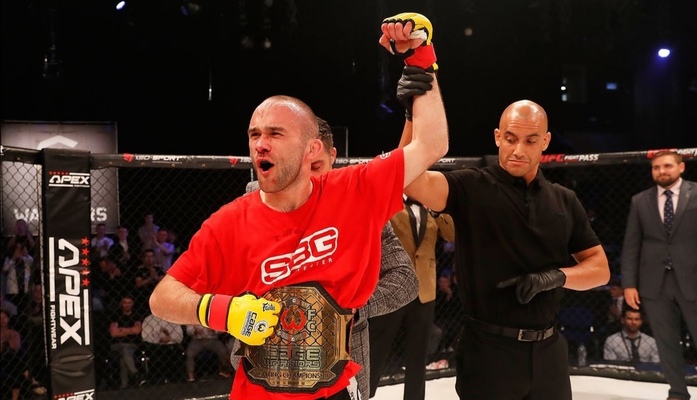 Eagle Fighting Championship, which is owned by UFC great Khabib Nurmagomedov, is back with its 34th installment. The lineup features a number of regional prospects, including undefeated welterweights Abdurakhman Alimagomedov and Samandar Murodov.

The 23-year-old Alimagomedov has been bouncing around from promotion to promotion while accumulating 10 victories. The undefeated “Lion of Dagestan” debuted in 2016 and scored stoppages in his first two fights. He continued to roll along while increasing the level of his competition. Only recently has he really stepped up, first against 14-fight veteran Daniyar Kolbaev and then against 18-fight vet Eslam Abdel Mineim. He choked out both of those experienced adversaries and is now riding a three-fight streak of submission victories.

Murodov, 21, has been perfect since his pro debut in 2018. The young Russian has submission finishes in four of his five outings, including two under the Gorilla Fighting Championship banner. His strength of schedule is comparable to the earlier days of Alimagomedov’s career, but Murodov’s upcoming opponent is by far the most successful fighter he has faced thus far.

Murodov has a tendency to put himself in more danger than necessary. He has nearly been caught in submissions on multiple occasions. The long, lanky fighter can be relentless in his ground attack, though. He has smothering top control and ground-and-pound, and he loves to look for chokes. His technique could use some work — he had an arm-triangle choke locked in on Viktor Boronin in the first round but opted to sit up while applying the choke rather than laying out flat — but he has been effective in getting the finishes despite his mistakes. In the second round against Boronin, he locked in a sneaky mounted triangle choke for the finish.

Alimagomedov is yet another in a long list of Dagestani fighters with a strong wrestling base. His ground game is more technically sound than that of Murodov, and he also looks more comfortable on the feet. While he has seen the scorecards more often than his opponent, the young prospect is a proven finisher. He likes to work from side control, often with one knee on his opponent’s stomach. Alimagomedov can get takedowns at will, and he’ll work away at his opponent until he sees an opening for a submission. Both of his recent finishes have come via arm-triangle chokes.

These two young fighters both have the potential to become future stars, but Alimagomedov is the more polished fighter at this point. He takes far fewer chances while dominating his foes. Murodov is sure to offer up some submission attempts, but his tendency to take risks will leave him in trouble during scrambles against a very patient Alimagomedov. This one should end in yet another submission finish for the Dagestani fighter.

Britain’s Cage Warriors organization is back with its latest trilogy affair. While all three cards are solid, the second night of fights is really something special. Two titles are on the line, with lightweights Agy Sardari and Donovan Desmae squaring off in the main event and Jack Cartwright set to defend his bantamweight crown in the co-headliner. With his undefeated record, Cartwright is arguably the biggest prospect of the four.

The undefeated champ captured the belt with two wins in a single-night tournament in 2019. Cartwright has since defended the belt with a decision nod over veteran Manuel Bilić and a submission of Gerardo Fanny. This is all the more amazing considering that the British fighter has only been competing at the pro level since 2017. His first seven fights ended in a first-round finish, including three by knockout and four via submission. He needed less than five minutes combined to beat his two tourney foes en route to the title. Even his second title defense required less than one round. Only the 26-year-old’s first defense against Bilić went beyond five minutes of action. The SBG Manchester fighter is obviously aggressive right out of the gates.

Poland’s Miller debuted in 2015 with a loss to fellow rookie Arbi Nashkhoev. He submitted his next two opponents before stumbling again, this time in a knockout loss to Krzysztof Gutowski. Miller then put together a five-fight winning streak before again falling victim to strikes just 26 seconds into his bout with Patryk Surdyn. The Legia Fight Club representative has since added two victories over seasoned competition, including a decision nod over Piotr Kamiński under the Babilon MMA banner.

Cartwright has shown a ridiculously well-rounded game from his earliest days as a pro. He clearly possesses the power to put opponents to sleep, but he also has strong takedown defense, excellent positional awareness and sweeps, and solid offensive and defensive grappling abilities. His aggressive nature only helps to make him more effective and dangerous once the opening bell sounds.

Miller is an interesting choice for a title challenger here. He’s set to make his Cage Warriors debut in a championship affair, but he’s not an incoming titleholder from another regional show. In fact, he fell short in his bid for the Armia Fight Night crown when he lost to the aforementioned Surdyn. Furthermore, his suspect chin is an excellent target for Cartwright. The Brit is leagues above Miller in all aspects of the fight game. The champ could end up adding another first-round finish to his record with a knockout of Miller.

KSW bantamweight kingpin Antun Račić usually ends up playing second fiddle to other high-profile KSW prospects in these previews, but his title defense against Sebastian Przybysz at KSW 59 is an exception. While Mariusz Pudzianowski is the evening’s headliner, Račić is the star with the most upward mobility among the big names from this lineup.

Račić won the KSW belt in late 2019 when he squeaked by Damian Stasiak via majority decision. The Croatian “Killer” returned for his first defense more than a year later and earned a unanimous nod over Bruno Santos. The 30-year-old’s record disguises a very successful KSW run. He debuted in 2009 and went 19-8-1 before joining the Polish league in 2017. He has since gone undefeated through six appearances. He doesn’t always run away with the victory, though, as half of his promotional wins have come via split or majority verdict. He has not earned a stoppage win since 2014.

Przybysz is one of three victims to fall via unanimous decision to Račić during the champ’s KSW tenure. The pair fought in late 2018 when Przybysz was just 4-1 and Račić was already a 30-fight veteran. Outside of that contest, “Sebić” has only suffered one additional loss since turning pro in 2016. That setback came against Jakub Wikłacz in the 27-year-old’s third pro outing. Przybysz has secured four of his victories by knockout and one by submission.

Račić tends to swing for the fences with every punch he throws. He’s more likely to throw looping haymakers, whereas a jab is a true rarity in his repertoire. When he does tighten up his combinations, his punches can be very effective. His haymakers, meanwhile, lack the same level of accuracy. The Croatian is far better when he can use the threat of his striking to set up a level change for the takedown. He works well from the top position, where he can score with ground-and-pound strikes. Račić has never scored a knockout, but he does have 13 submission victories.

Przybysz is far more likely to end a fight with his fists. Two of his last three wins have come via knockout. He likes to stay at range and throw two-punch combinations. Przybysz also has an excellent sprawl. If he can keep this rematch on the feet, then he could have a chance at outpointing the much shorter Račić. However, it’s unlikely that he can fend off Račić’s takedowns for the entirety of this contest.

Račić took all three rounds in the pair’s first clash, and the chances are good that he’ll do so again. Outside of a slam knockout, the Croatian hasn’t been finished by strikes in his career. While his finishing ability has vanished, Račić can still dominate a fight with his wrestling and take the win on the scorecards. He’ll do so again when he meets Przybysz.

Jeffery won a grueling clinch battle over Huckbody to take the Cage Fury middleweight crown. He was able to stuff Huckbody’s takedown attempts and therefore avoid any risk of the predicted submission from Huckbody…The predictions were on point for the remaining two fights, as both Cummins and Theodorou scored striking finishes of their opponents…After more than two rounds of sparring, Cummins landed a combination that floored Kalani for the third-round knockout…Theodorou came through with the expected late finish of Dwyer…”Best of the Rest” selections Abdysalam Uulu Kubanychiev and Diego Lopes scored stoppages, while Phumi Nkuta picked up a decision victory.