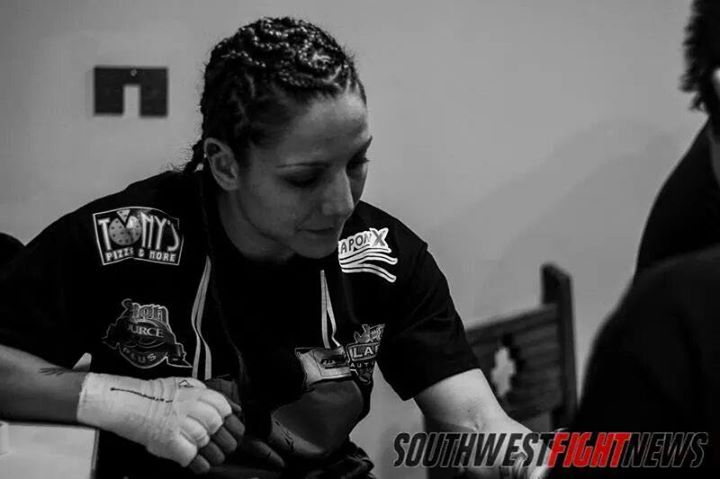 RFA 18’s Brenda Gonzales: Finding Her Calling in Her Own Backyard

Some fighters start training in the martial arts as soon as they learn to walk. They grow up in the gym and learn technique before they learn their ABC’s. Their path to MMA is straight. This is not a story about one of them. This is the story of a woman who has loved and lost, who wandered (almost practically in the desert, seeing as how it’s New Mexico) and who found her true calling when she met her true love.

Brenda Gonzales grew up in New Mexico and played all kinds of mainstream sports, but she never learned any of the martial arts. She was diagnosed with a heart condition—Wolff-Parkinson-White Syndrome—her sophomore year of high school. After two ablations, she was given the all clear to get back into basketball, softball, track and so on.

But just when her physical heart was healing, her emotional heart took suffered a devastating blow. Her father was diagnosed with ALS (Lou Gehrig’s Disease). After she graduated, she became her father’s caregiver because her mother had to continue working. About five months after she was married, she lost her father to the ravaging disease and lost her sense of self.

She got a divorce and moved away, moving around the state. Gonzales searched for solace in the bottle, but couldn’t shake the feeling that her life was missing something. She got a call from her mother with more bad news. Her mother had been diagnosed with colon cancer. Gonzales knew it was time to move back home. She helped her mother through treatment, and her mother is now in remission.

And that is where she reconnected with Tim “The Dirty Bird” Means. They had known each other since they were kids, and he’d had a crush on her since then. He had been training MMA at FIT NHB. She came to the gym with him and the rest, as they say, is history. She fell in love with boxing, MMA and Tim in 2007.

Gonzales had her first pro boxing bout in 2010 and won in decisive fashion, a first-round TKO. In 2011, Gonzales got her first pro MMA win, another first-round knockout. Her pro MMA record of four wins and one loss is impressive, with three of her wins coming from TKO and her only decision ending in a win over Sarah Alpar, a tough competitor. She suffered her only defeat when she traveled to Tokyo and fought for Pancrase against Rin Nakai, a legend of women’s MMA.

“I knew I was going in as an underdog, so I did everything I could to prepare,” Gonzales told Combat Press. “I felt confident going in. We had gone over ways for me to cut the cage off. I tried to get her to engage on the feet, but she didn’t. The ref wanted us to engage more—at least I think that is what he wanted—and so I tried a spinning back fist. She got a good suplex and I stuck out my arm to break my fall when she threw me. I dislocated my elbow and that was it.”

Gonzales was finished via rear-naked choke by Nakai.

Now that Gonzales has found her “home” in MMA, she has to decide which weight class is best for her to compete in.

“I can’t make 115 [pounds], so trying out for the TUF house was out of the question. I’ve had a few fights at 125, and this one is at 135. 125 was a good cut, but I am looking forward to another fight at 135. I feel like I can stay strong. My fight with Rin was at 135, and I feel better, not depleted or drained. I can do more weightlifting and get into training. I am not concerned about being undersized at 135. I went to the TUF 18 tryouts and looked around—I was the same size as almost everyone else. Just not Peggy [Morgan] and Jessamyn [Duke],” laughed Gonzales.

Gonzales is currently the flyweight champion for King of the Cage, an organization for which she fought exclusively prior to her Pancrase bout against Nakai.

“They are such a well-known promotion and do a great job preparing their fighters for interviews and really for careers,” she said. “They do a great job building fighters up. It’s been an honor. Same for fighting for Pancrase. And now I get to fight for [Resurrection Fighting Alliance]. They are so big on promoting and getting us out there for interviews. It’s been great.”

Gonzales’s next challenge will be Heather Bassett, a 2-1 fighter who has also fought at 125 pounds.

“We are working on everything,” Gonzales explained. “We’re not sure how good she is on the ground, as most of her fights have been standing up. So the camp has been prepping me on my takedowns and my takedown defense. You can watch videos of fighters standing the whole fight and then have them be a great wrestler.”

“I am a primarily a striker. I have boxing as my strong point and my ground-and-pound is tough. I love to punch—they don’t call me ‘Boom Boom’ for nothing,” said Gonzales pointedly.

No matter where the fight ends up, Gonzales will be right at home. Literally. She is fighting in her hometown of Albuquerque, N.M., just down the road from her gym. Even though it took her a while to find her place in this world, or maybe because of her journey there, her opponent will have to work extra hard to knock her out.

Brenda would like to thank her sponsors: Unleashed Sports Nutrition, Flying C Wrecker, Tavenner Towing, Signature Cuts, Damage Control Mouthguards, Sign Source Plus and Unique Technique by Mona. She would also like to thank the FIT NHB Wild Bunch and her supporters and fans. Follow Gonzales on Twitter: @bgonz135
Advertisement